It's all well and good having a seven or eight-seater family car, but if you have to remove one or more child seats in the second row in order to climb through to the third-row seats then that just really isn't practical for any parent on a daily basis.

Below we have put together a list of practical family seven or eight-seater cars that you do not have to remove a child seat to access the third-row: 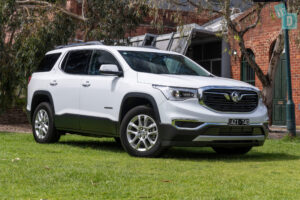 The second row of seats in the Holden Acadia is split 60:40, it has a mechanism that allows you to move the 40% seat forward, with a child seat installed, and have enough room to climb through to the third-row seats. I found this only worked if you only had a child seat in the outer second-row seats though. If you have three child seats across then the central one prevents it from working. The child seat on the 40% seat MUST be using the ISO Fix and top tether connectors though, not the seatbelt and top tether. The Acadia fitted five big child seats in the rear seats which is fantastic! See the full review here. 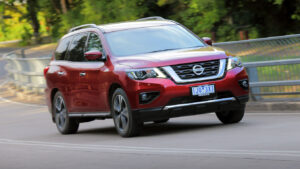 The second row of seats in the Nissan Pathfinder is split 60:40, it has a mechanism that allows you to move an outer seat forward, with a child seat installed, and have enough room to climb through to the third-row seats. The child seat MUST be using the ISO Fix and top tether connectors though, not the seatbelt and top tether. This is a fantastic BabyDrive feature!

The Pathfinder exceeded expectation with its seating capacity. There are two Isofix points, one in each of the second-row seats. four top tether anchor points in the backrest of all three second-row seats and there is one in the right-hand third-row seat! This was fantastic and allowed me to install four child seats using the seat belts and top tether points. The child seats were relatively easy to install and the only thing I had problems with was getting the top tether strap through the central seat headrest bars, as they were too close together making it very difficult. There was good space for forward-facing and rear-facing seats across the middle row. Legroom was also very good in the Pathfinder. The second-row seats are split 60:40 and both sides slide to adjust the legroom. I found I could sit in the third row comfortably with a rear-facing child seat in the second row (and the second-row seat in the furthest back position) and the driver's seat has plenty of room for most size drivers. Read the full review here. 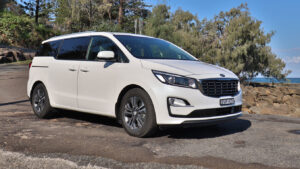 In the Kia Carnival if you slide an outer second-row seat all the way forward and use the seat lifting lever to bring the seat back and base upwards, I think there would be enough room for a child to climb in behind it or by folding down the seatback of the central seat in the second row and climbing across there, the central seat is also removable so you can have a walk through to the third-row seats. The only problem is I didn't think there was an easy way for an adult to reach through to do up the child restraints in the third row, without uninstalling a child seat in the second row and climbing up.

When it came to the installing child seats in the back, it took a while to get to grips with all the different seat combinations, sliding mechanism options and top tether and ISO Fix positions! So there are four top tethers in total and three ISOFix. The second row is made up of three individual seats that slide and fold up separately. The two outer seats have ISOFix and top tethers. The ISOFix points are not within plastic guides, they are between the seat back and base, but I found them relatively easy to connect to. The top tethers are really far down on the seat backs, so I found for both rear facing child seats I tried to instal there I needed an extension strap. In the third row, there are another three seats too, split 60:40, and there are ISOFix and top tether in the seat on the 40 split side. There is another top tether in the central seat. I was a little confused by there being top tethers in the two seats next to each other and not in the two outer rear seats. Again the top tether anchor points are really far down on the seat backs, and while I didn't need an extension strap with my forward-facing child seats, I did with rear-facing. I was able to install two forward-facing child seats in the third row of the Carnival; the Britax Maxi Guard and Kid Guard Pro fitted next to each other and I could actually squeeze into the seat beside them! Head and legroom are excellent in the third row. Although I could only get four child seats into the Carnival because there are only four top tether anchor points, the good thing about it is the remaining two seats are usable by adults! So the Carnival is good for a family where some kids are too big for child seats and will be just on the car's seats. Legroom was excellent! With child seats in both rows, there was plenty of legroom for each row and the front passenger and driver. To climb into the central seat in the second row there was enough room when the second-row seats are slid back to climb around the front of an installed child seat. Read the full review here. 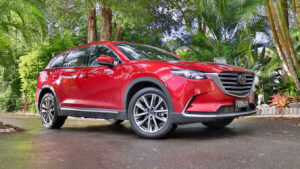 The Mazda CX-9 is a seven-seater that I have managed to easily and very comfortably fit five lovely big child seats into the back of! It is AMAZING!!!

All the second-row seats slide forward and back to adjust legroom distribution. The outer seat in the second row, behind the front passenger, has a mechanism to allow you to bring that seat forward WITH a child seat installed (only if you are using the ISO Fix not the seatbelt), giving a lovely big step through access to the third-row seats.

This meant I had to consider which child seat I put in the second-row central seat, making sure it wasn't too wide to allow for the seat to slide forward and back freely. I decided upon…. the Britax Unity infant capsule (rear facing) in the third-row access seat using the Isofix points, the Britax Kid Guard Pro booster seat next to it, in the central seat and the Britax Graphene (rear facing) in the other outer second-row seat using the seatbelt. In the third row, I fitted two big child seats, the Britax Maxi Guard Pro (forward facing) and the Britax Platinum Pro (also forward facing). Forward facing seats make sense in the third row because the children would be of an age and size they could climb in themselves and all the adults need to do is reach in and do up their harnesses. Read the full review here. 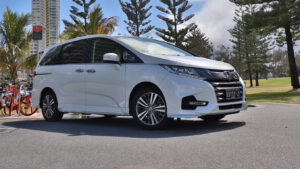 In the Honda Odyssey, the second-row seats could slide an enormous amount which meant that I was able to climb in around the installed child seats to access the third-row seats and the gangway down the centre of the car makes accessing all three rows of seats really easy too.

I was able to install four child seats in the Odyssey which was great. There are top tether anchor points right at the bottom of both second-row seat backs, I found I needed an extension strap for the rear-facing child seat. There is ISOFix in the two second-row seats, but they are not within plastic guides, they have the seat upholstery fabric concealing them and I found it difficult to part the fabric with one hand while connecting them with the other while managing the child seat as well! There were two top tether anchor points for the outer seats in the third-row model I tested, but no ISOFix. The top tethers were not on the seat backs but on the lip of the boot opening, which caused the tether straps to go across the boot space which is not a practical design at all. I managed to install two big child seats in the back there, I did struggle a little to post them in and out through the doors and folded forward seats though. Read the full review soon on BabyDrive.com.au.

The Skoda Karoq will fit two child seats and has a practical sized boot, it is fantastic to drive, has a great media system and Skoda features but lacks legroom Read More

Which 5 Seat cars will fit 3 child seats across the back row?

Overall I found the Volkswagen Golf Alltrack Wagon a very suitable family car, the boot space being a wagon is awesome, and it is a very practical and usable shaped space. I was amazed how much I could fit in the boot! Read More