Guest contributor Vani Naidoo, whose children are now beyond child seat age, is quite partial to a touch of luxury so it was fitting for her to try the 2021 Audi Q8 50 TDI quattro for the week.

Before kids my idea of luxury would have meant a holiday somewhere exotic, a regular massage or beautiful shoes that I didn’t require an occasion. These days it doesn’t have to be too grand a gesture  – soft, high thread count sheets, time for coffee and cake at a favourite café or even shampoo not bought from a supermarket … you know how it goes. So having the Audi Q8 visit for a week, with its sumptuous interior and lavish disposition was a right treat. 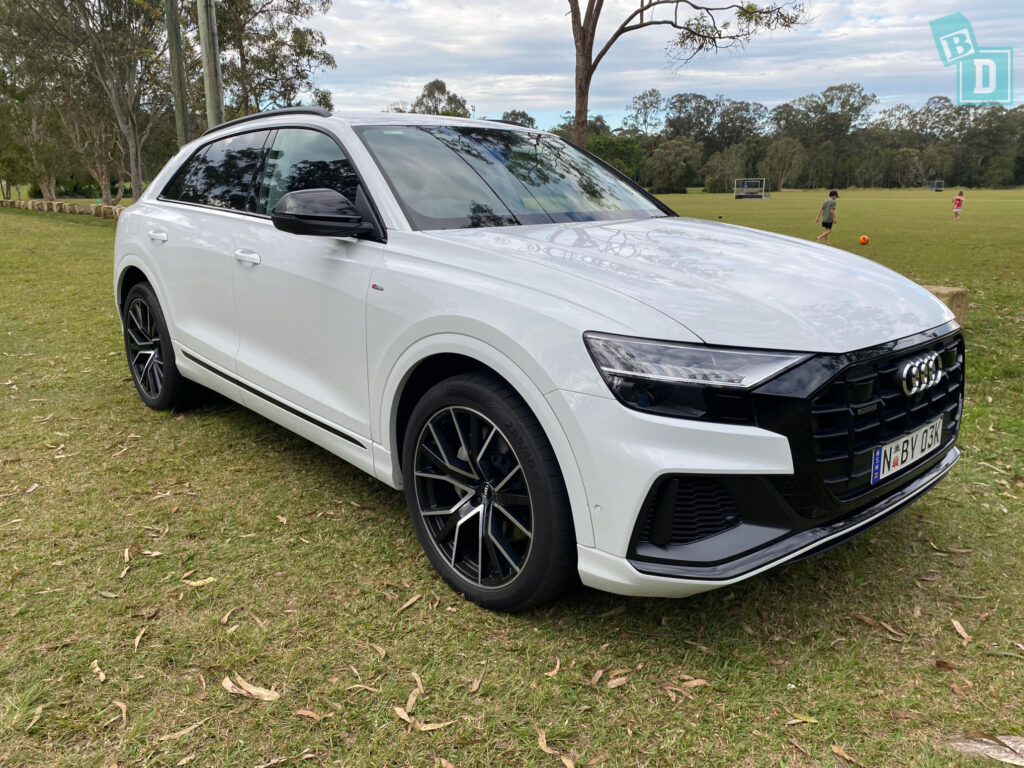 As an SUV, the Q8 is an interesting concept. Sharing most of its components with the seven-seater Q7, it is a shorter, wider coupe-style offering that can carry five in supreme comfort.

The 50 TDI quattro is the entry model of the range in Australia starting at $129,990 before on-road costs. Families also have the option of the 55 TFSI petrol variant. More powerful sporty drives are available through the SQ8 TDI and the RS Q8. If you need to know about how child seats and strollers fit into the Audi Q8, check that test here. 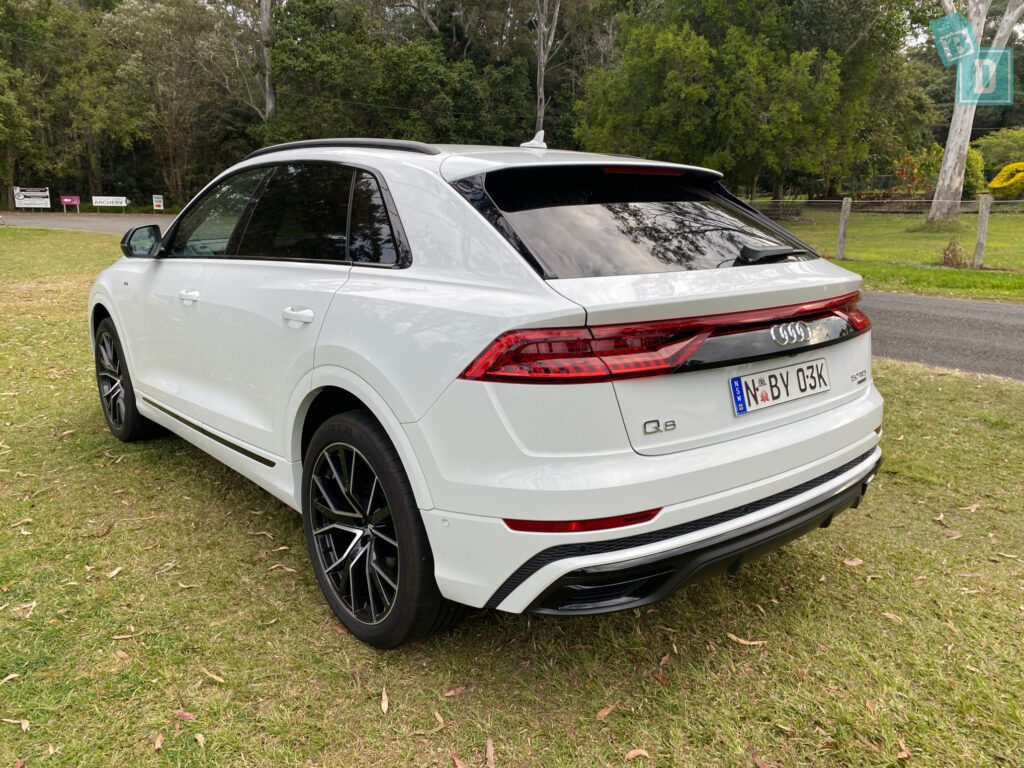 Rest easy here, the Q8 is well equipped to swallow all those ‘essentials’ the kiddos just can’t seem to leave home without. The door bins are cavernous and will take 1.5-litre water bottles and there are two cup holders for the front seat passengers to go with the two in the flip-down armrest in the rear. 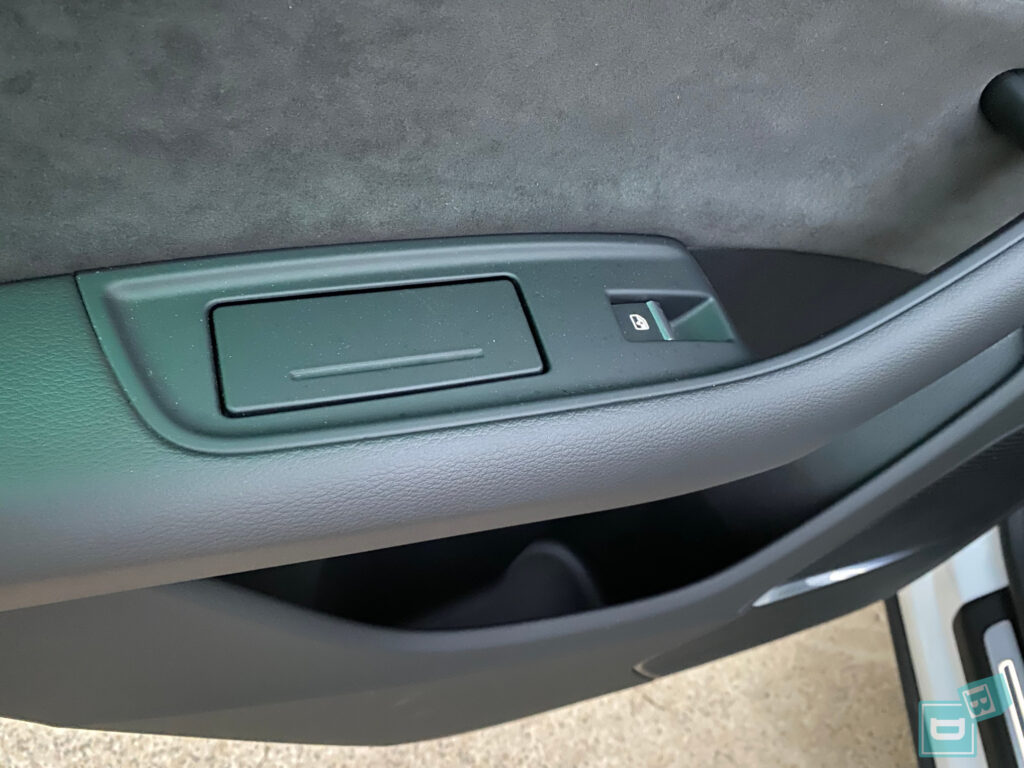 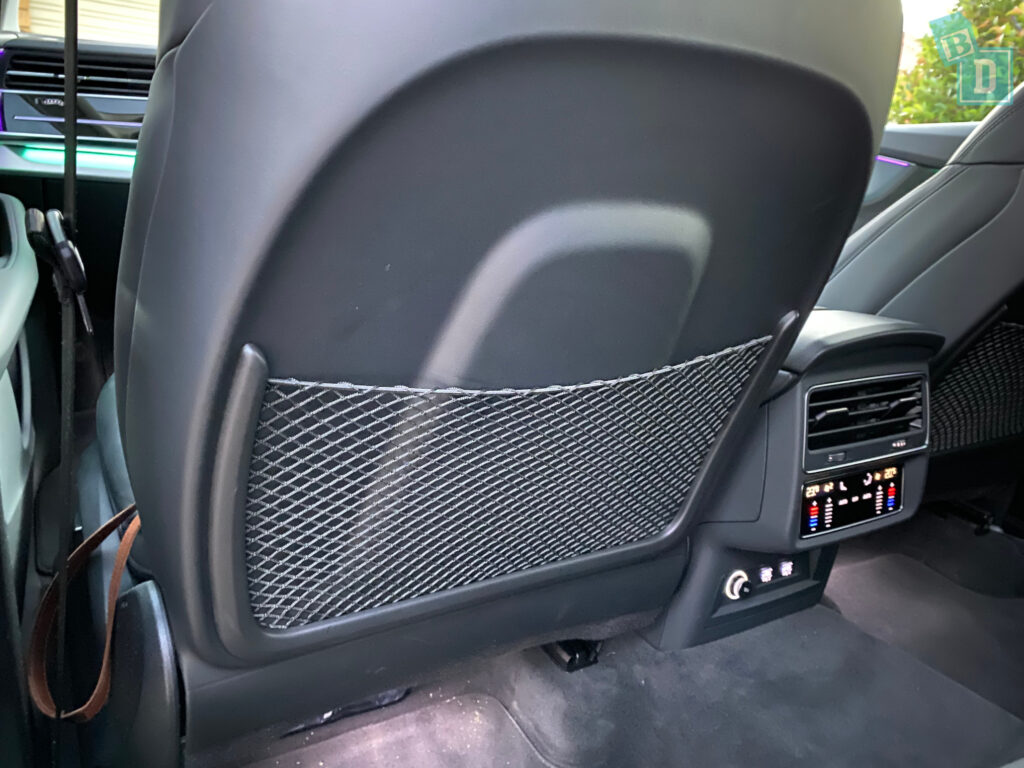 The large storage bin in the centre console is of a useful depth but more importantly, also houses a wireless phone charger that actually works. The boot, at 605 litres, is compromised slightly by the sloping tailgate but not enough that it is going to annoy. Well, not humans anyway, our Labrador Lola was less impressed, the sloping rear window clearly rubbing her the wrong way.  It is certainly large enough to carry the weekly shop and the kids’ sporting equipment at the same time with oodles of room left over. If you need it, the 40:20:40 rear seat stows (via one-touch levers) to expand the boot space to almost triple the space. 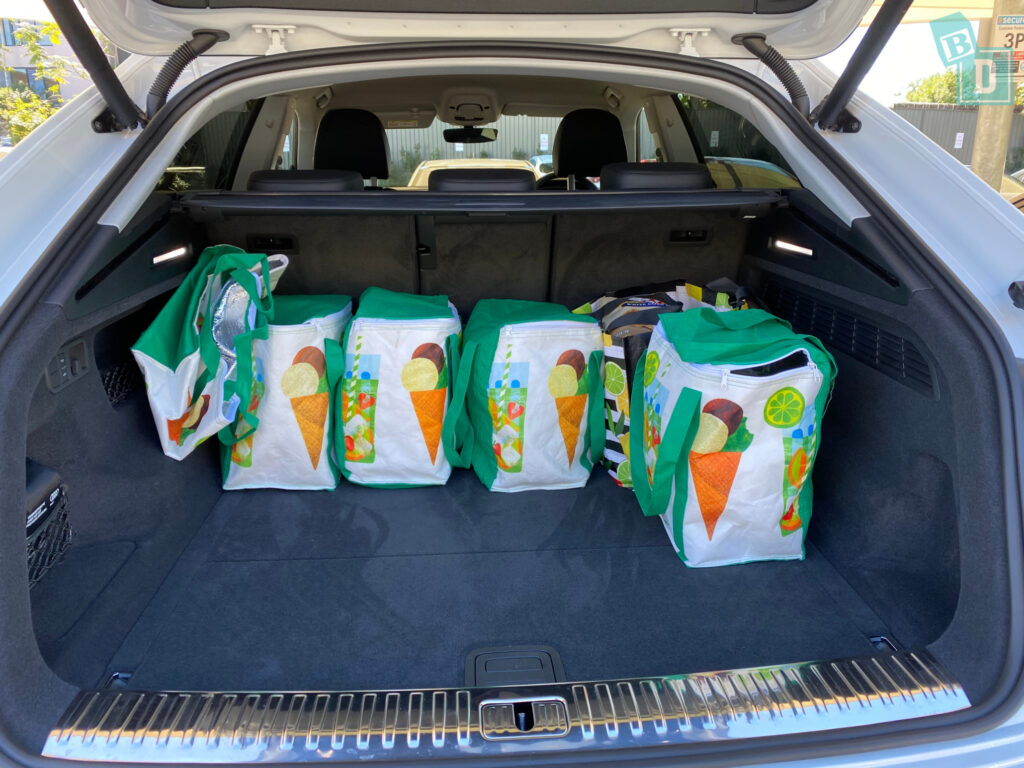 As you would expect, the Q8’s infotainment system is pretty impressive. But its not just good to look at, it is intuitive to use and can be personalised as well. A 10.1-inch colour touchscreen, sitting proud in the centre stack, fronts the navigation and entertainment system. That, along with the 8.1-inch touchscreen below, which features the four-zone climate system controls and car set-up options, has Audi’s haptic touch response which weights your inputs to make you feel like you are hitting an actual button rather than a screen. It also features handwriting recognition which I suspect would be easier for right-handed people to operate in countries where the steering is on the left side.

We are big fans of the Virtual Cockpit – just a fancy name for the 12.3-inch screen that replaces the traditional instrumentation – that can show the driver the navigation maps or instrument graphics in full-colour display. There is full smartphone connectivity with Apple CarPlay and Android Auto with voice control, digital radio and internet connectivity. My girls are at the age when music is becoming a super important form of expression and really loved the audio quality of the 10-speaker sound system. It's great for them, but the day without another blaring Olivia Rodrigo hit can’t come soon enough for me.

Given the dimensions of the 2021 Audi Q8, it is hardly surprising that there is heaps of space to stretch out. It feels like an embarrassment of riches really, especially when you have a 188cm husband in the front seat and a growing teenager seated behind who is all legs. There is room for broad shoulders too while adults in the rear seat can sit in comfort unhindered by the sloping roof. 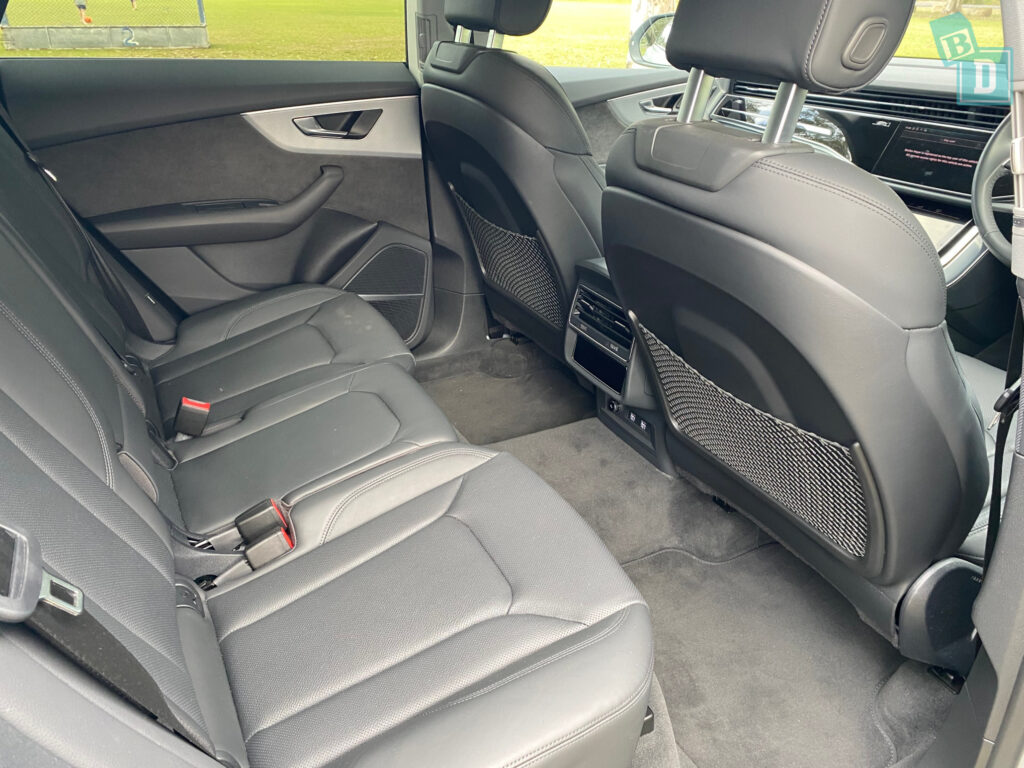 Up front, despite the sizeable centre console, the lodgings don’t feel cramped at all. In fact, I was able to fire up the laptop and work comfortably in the driver’s seat while waiting for the joys of swim squad to end. The fact that the seat could be heated (and cooled for that matter) didn’t hurt either. 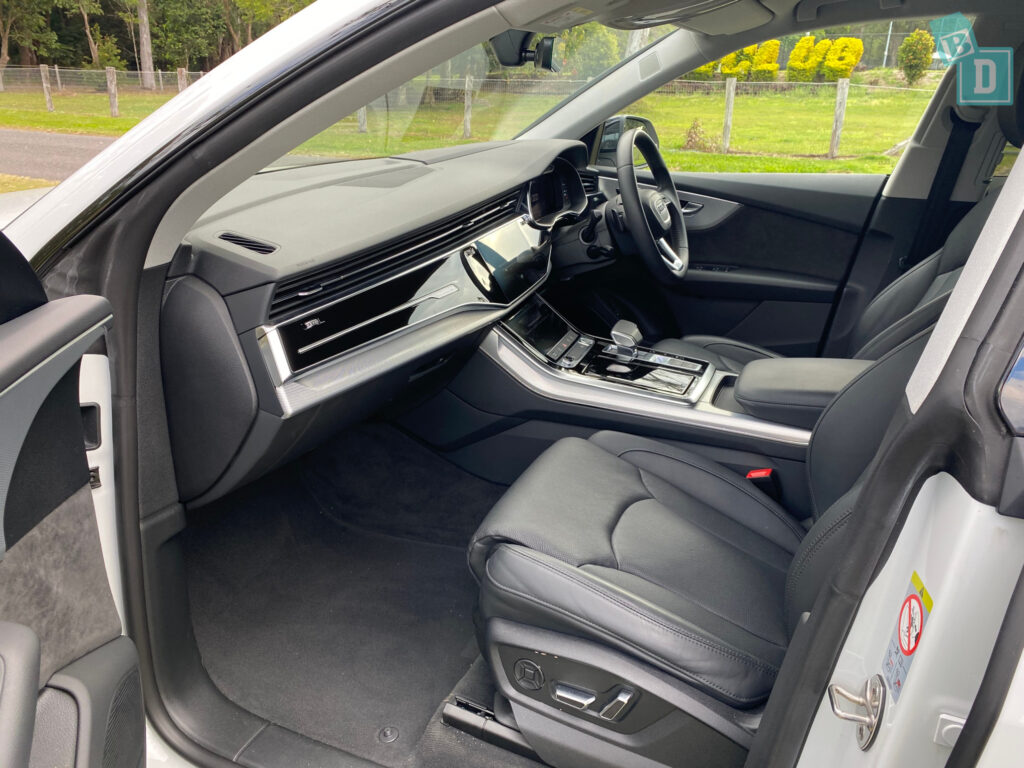 Fixtures and fittings feel, and are, of well, luxurious quality. There is a reassuring thud from closing doors, the leather in the seats is soft and accommodating and cabin highlights are considered and tasteful. Fingerprints are a bugbear though and there are surfaces aplenty for them to get up to no good. 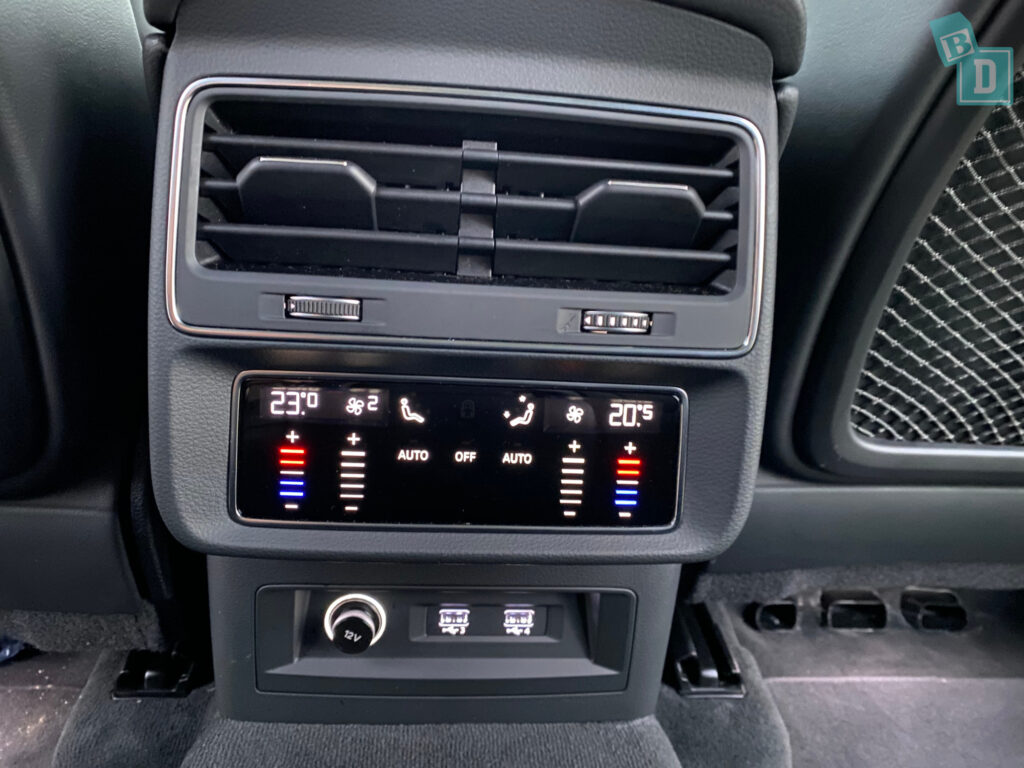 The Q8 50 TDI is powered by a 3.0-litre turbo-diesel V6 engine and good thing too because at almost 2.5 tonnes, it definitely has some solid heft. You can feel it from standstill and in low-speed environments but much less so on highways for instance when the Q8 has less cause to show restraint. There is very little body lean around corners and is easy to manoeuvre even in tight city carparks, aided much in part to the 360-degree surround-view camera system. 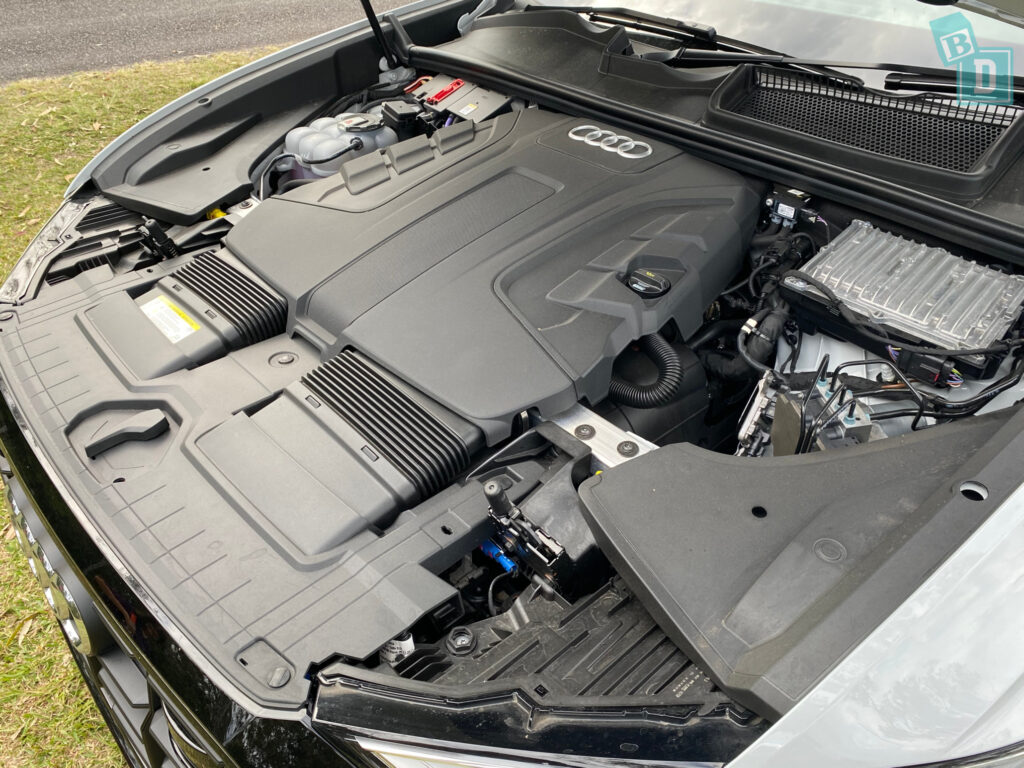 The eight-speed automatic transmission drives all four wheels giving that feeling of surety on all surfaces. The Q8 feels nicely balanced offering a pleasant, cocooning drive for all passengers with very little road noise despite the bigger wheel size.

SUVs at this price point usually come with an enviable list of safety inclusions and the Q8 sticks to that brief. There are, of course, those things that are pretty familiar now including blind-spot monitoring and rear cross-traffic alert as well as adaptive cruise control and auto emergency braking (amazingly it works at up to 250km/h) which underpin the five-star ANCAP rating. But there are also some other great technologies like Intersection Assist which uses cameras and radars to prevent collisions with oncoming vehicles when turning and Night Vision assistance which helps detect any wandering people and animals on the road ahead. 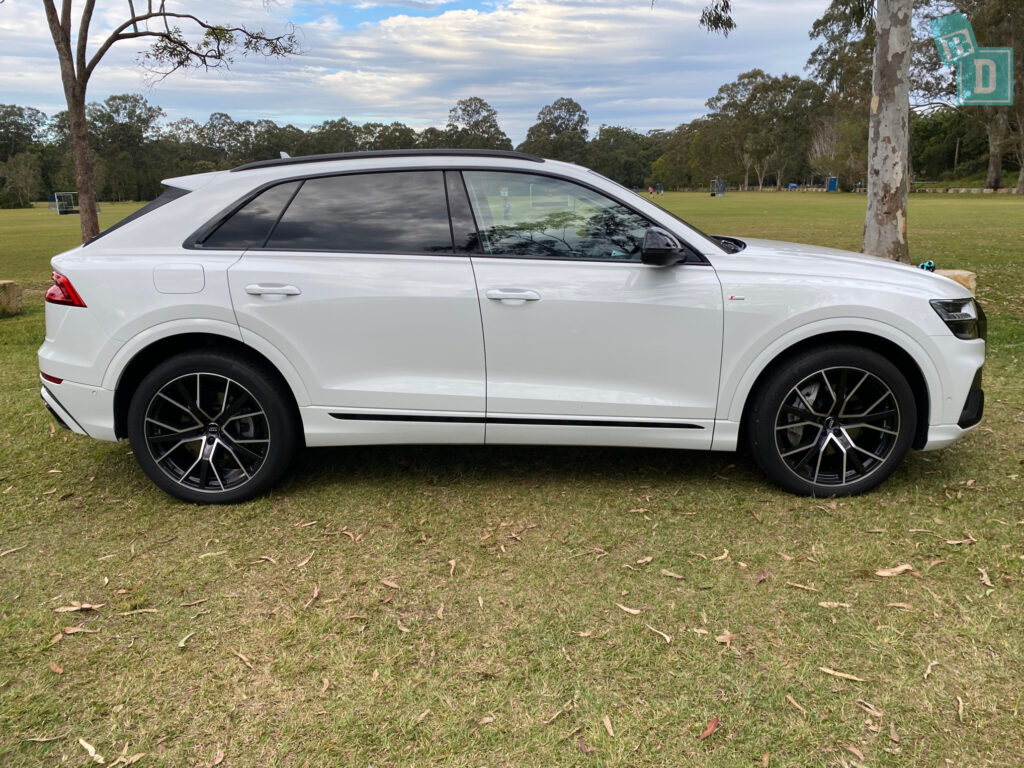 There are dual front, front and rear side and full-length curtain airbags. Parents with young kids will find there are two ISOFIX points in the outboard rear seats and three top tethers.

Warranty cover lasts five years with unlimited kilometres, which although an improvement on Audi's previous three-year offering feels a bit stingy in the era of seven and ten-year warranties. Service intervals are 12 months/15,000km. Audi offers capped price servicing at $2040 for three years/45,000km or $2960 for five years/75,000km.

Diesel variants such as the 50 TDI tend to be more economical at the bowser. We got around 7.5L/100km during our week over 700km which compares fairly well with the official claimed 6.9L/100km.

Did you like this review format for parents with kids beyond the child seat? Let us know in the comments below! If you need to know about how child seats and strollers fit into the Audi Q8, check that test here.

The Hyundai Santa Fe is only an occasional seven-seater and more of an everyday five-seater with a nice big boot. Three child seats fit across the second-row seats, but there are no top tethers in the third row so I couldn’t install any child seats there. When using just five seats, the boot is a bit smaller than the Mazda CX-9 and bigger than the Kia Sorento but it’s tiny when using all seven seats. Read More

Three child seats fit in the Toyota Fortuner (just) and the boot is excellent, holding all sizes of stroller and pram even when using seven seats Read More

The new 2022 Isuzu MU-X drives more like an SUV than a 4×4, will hold three child seats and a twin stroller fits in the boot when using all seven seats Read More