When comparing the Kia Sorento PHEV vs Hyundai Palisade V6s for seating, there are some notable differences. 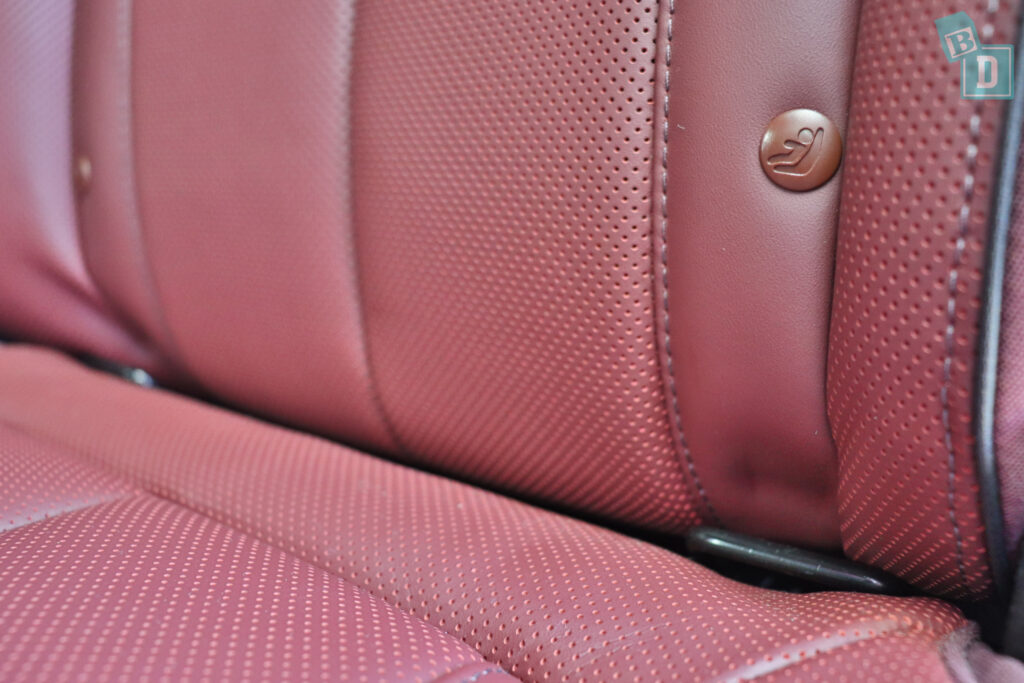 None of the ISOFix points are within plastic guides but they are all nice and easy to connect to. There are five top tether anchorages; one on the back of all three second-row seats…

…and one on the back of the outer and central third-row seatbacks.

When installing child seats, the Palisade is definitely the more spacious of the two, I found three Infasecure child seats fitted across the second-row seats really easily with a little room around them, it is very roomy. I fitted the Infasecure Achieve More and two Infasecure Attain More child seats. To learn more about the child seats I used in this review click on the link here.

I found five Infasecure child seats would fit in the back of the Kia Sorento PHEV.

In the back of the Kia Sorento PHEV, there are three seats in the second row and two in the third row. There are four ISOFix points, one in each of the outer second-row seats…

…and one in each of the third-row seats, not within plastic guides but still nice and easy to connect to.

This is where the Sorento does outdo the Palisade: There are top tether anchorages in the back of all three of the second row seats…

…and both of the third-row seats, so five top tether anchorages in total!

I can install five Infasecure child seats in the back of the Kia Sorento PHEV. I fit two Infasecure Achieve More and one Infasecure Attain More in the second row.

When comparing the Kia Sorento PHEV vs Hyundai Palisade V6 for third-row access it is a similar story in both these big SUVs.

In both, the second-row seats are split 60:40 with the 40% section on the driver's side of the car so it is not on the kerb side when street parked.

With both cars, you use a press button on the shoulder of the seat back and then slide the second-row seat forward to climb through to the third row.

The Palisade and Sorento both have grab handles to help you to climb through to the third-row seats. The child seat has to be installed in this position using ISOFix rather than the seatbelt or you can’t slide it forward.

The child seats do hit on each other slightly in both vehicles and in everyday practicality, it’s not ideal because you have to move the driver's seat forward EVERY TIME you want to access the third-row in both cars, which gets annoying very quickly and would take too long for my liking if you were in an accident.

With both cars, if you only have two child seats installed in the second row, the third-row access would work much better.

Legroom is slightly better in the Hyundai Palisade; I found you can fit a 180cm passenger in the first and third rows with a rear-facing child seat in the second row.

The boot space in the Hyundai Palisade definitely trumps the Kia Sorento. It is bigger and more practical for large families, fitting eight shopping bags when using all three rows of seats which is incredible.

Or, it takes a whopping 21 shopping bags when only using two rows of seats. This is great for smaller families wanting to use just the first two rows of seats and have really big boot space for family camping trips or the family dog.

…or 17 shopping bags when using just the first two rows of seats.

The Palisade really does win over the Sorento on this one because it also holds a twin pram in the boot with three bags of shopping when using all 8 seats!

Meanwhile, when all three rows of seats are in use the Kia Sorento PHEV will only hold a single pram with one shopping bag and a twin pram will not fit.

Storage is slightly better in the Hyundai Palisade too, with some real stand-out features!

It has a fantastic central console shelf which is perfect for your handbag, hat or shoes.

The rear doors have double cup holders which are in a fantastic position for kids to reach their drinks and snacks when you're driving. Great also for adults on long journeys who are double-parked!

The Kia Sorento PHEV has single rear door cup holders, which are great for kids to easily reach their water bottles.

There is also plenty of practical storage in all three rows for families.

Both cars have aircon vents in all three rows of seats and they can be controlled and locked from the front media screen.

The Kia Sorento PHEV does not have airbags in the third row whereas the Hyundai Palisade does have third-row passenger airbag protection. Only the Sorento has a five-star ANCAP rating though, the Palisade remains unrated.

Although these two cars may both be on the same decision list for families the two cars are at opposite ends of the fuel efficiency spectrum, the eight seater Hyundai Palisade being a gas-guzzling 3.8L V6 snd the Kia Sorento is a super-efficient plug-in-hybrid PHEV that you can run on electricity alone for most local trips or sitting with the aircon going when you're stuck in the car with a sleeping baby.

In conclusion, the runner up of this comparison is the Kia Sorento PHEV which scores 4/7.

The Sorento PHEV does not have airbags in the 3rd row and there is not as much room across the 2nd row to install child seats or as much legroom in each row. However, it does hold five Infasecure child seats. That is one more than the Hyundai Palisade and it has five top tether anchorages to give families the most flexibility over where they seat various passengers.

The winner, the Hyundai Palisade scores 5/7.

The Hyundai Palisade has a much more generous and practical size boot for large families needing to hold a double pram when using all eight seats.

The double door cup holders and handbag shelf are fantastic!

Which is the Best Family and Child-Friendly Seven Seat SUV? We find out in this nine-car comparison. Read More

The Hyundai Santa Fe is only an occasional seven-seater and more of an everyday five-seater with a nice big boot. Three child seats fit across the second-row seats, but there are no top tethers in the third row so I couldn’t install any child seats there. When using just five seats, the boot is a bit smaller than the Mazda CX-9 and bigger than the Kia Sorento but it’s tiny when using all seven seats. Read More