I am extremely excited to have a preview of the brand new 2023 Nissan Pathfinder! It's a fantastic seven-seater SUV and the good news for families large and small is it is out later this year. Let's take a look around it…

This brand new Nissan Pathfinder looks more rugged on the exterior, with a shorter front bonnet and slimmer pillars which will hopefully mean increased visibility from the inside too. 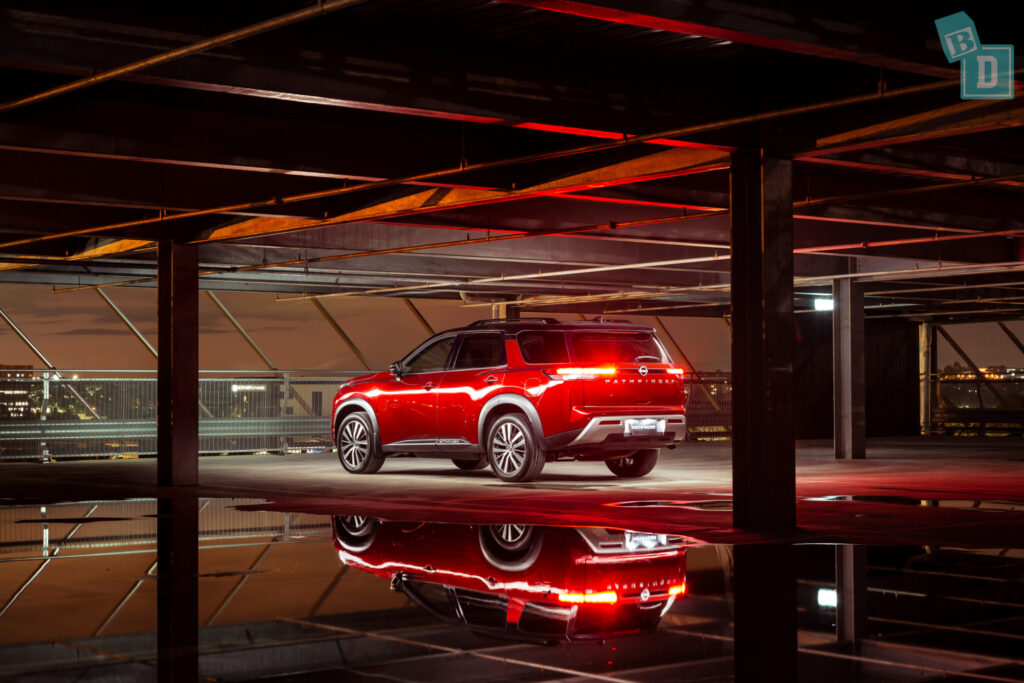 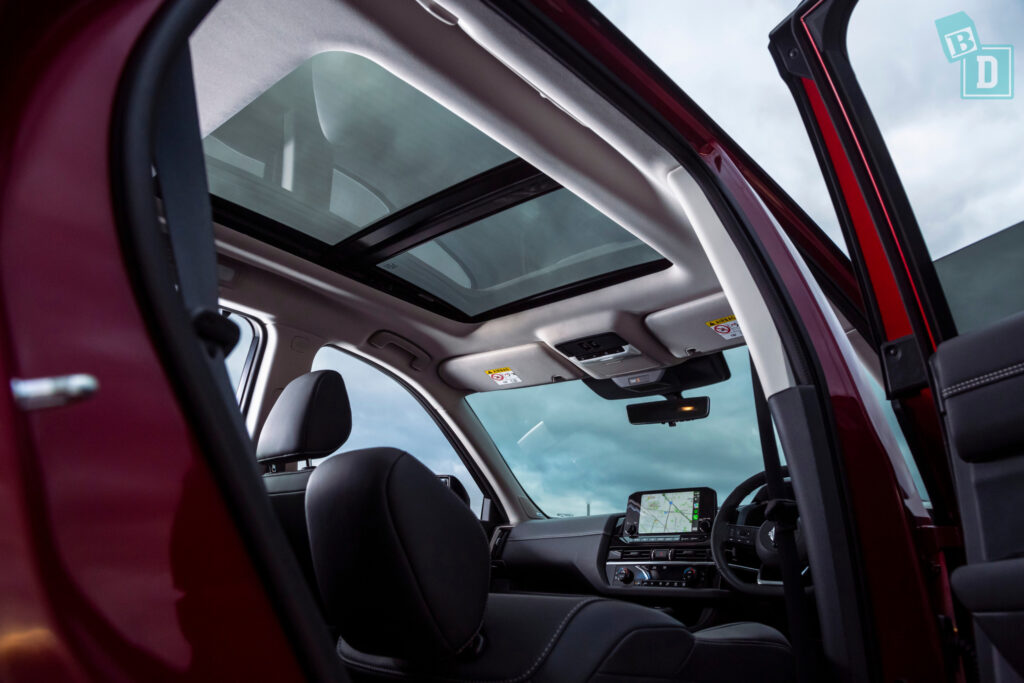 …which is also modern and spacious in feel. 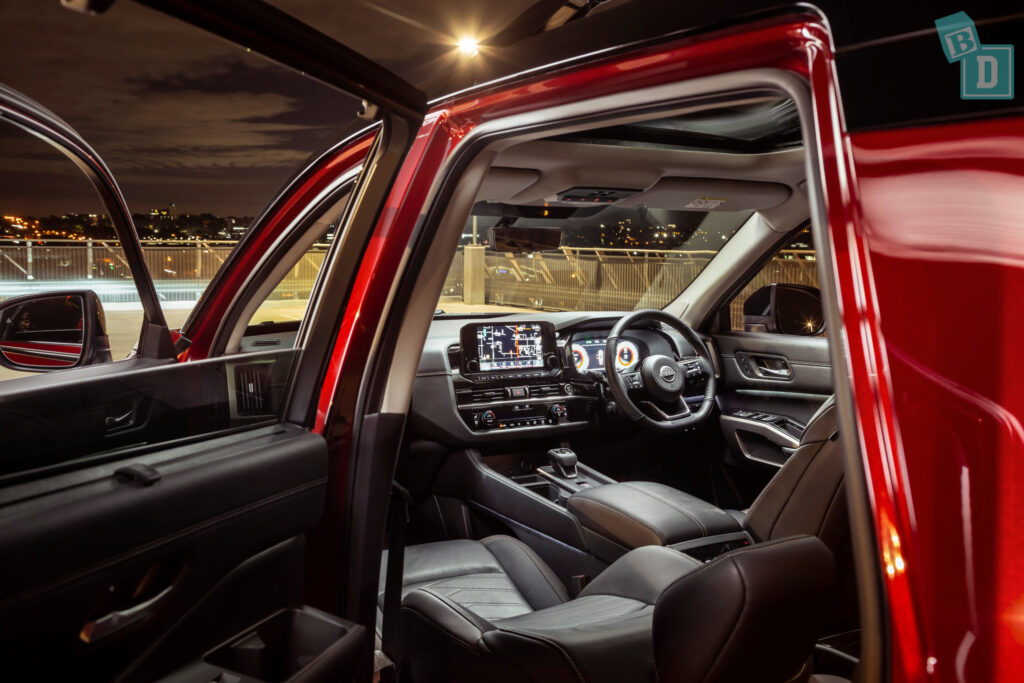 The new 2023 Nissan Pathfinder really has been designed with a BabyDrive tick list and families in mind, let me show you all its features…

I'll start with the inbuilt rear window blinds in the top-spec models which are fantastic for shielding rear passengers from the sun. 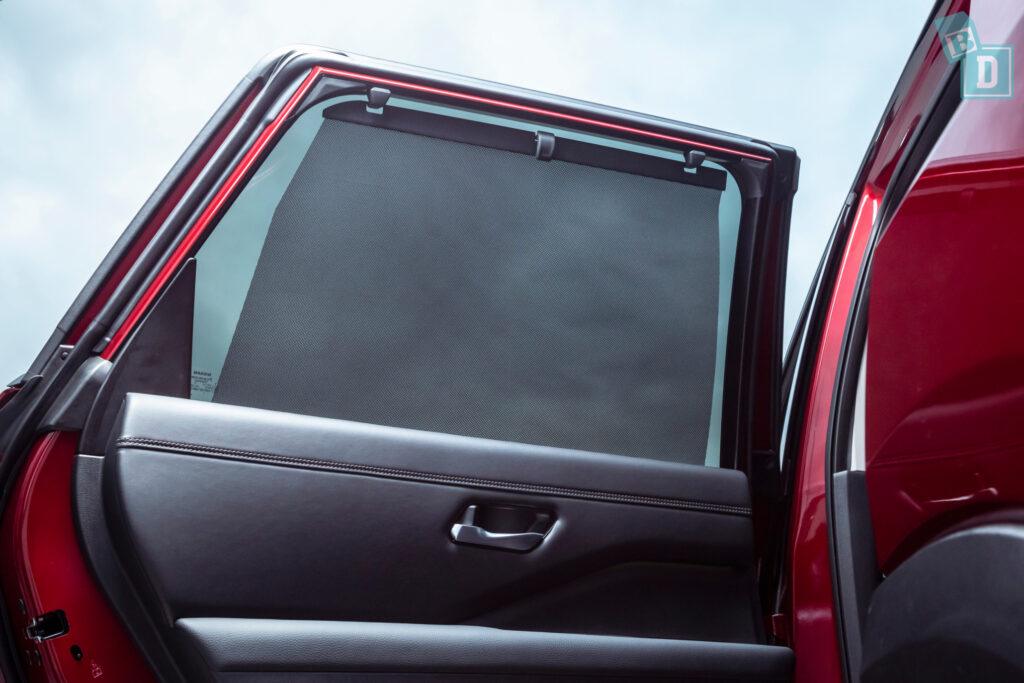 The air-con vents have been moved into the ceiling of the 2023 Nissan Pathfinder and they are in both rear rows of seats, which is fantastic for keeping rear passengers comfortable. 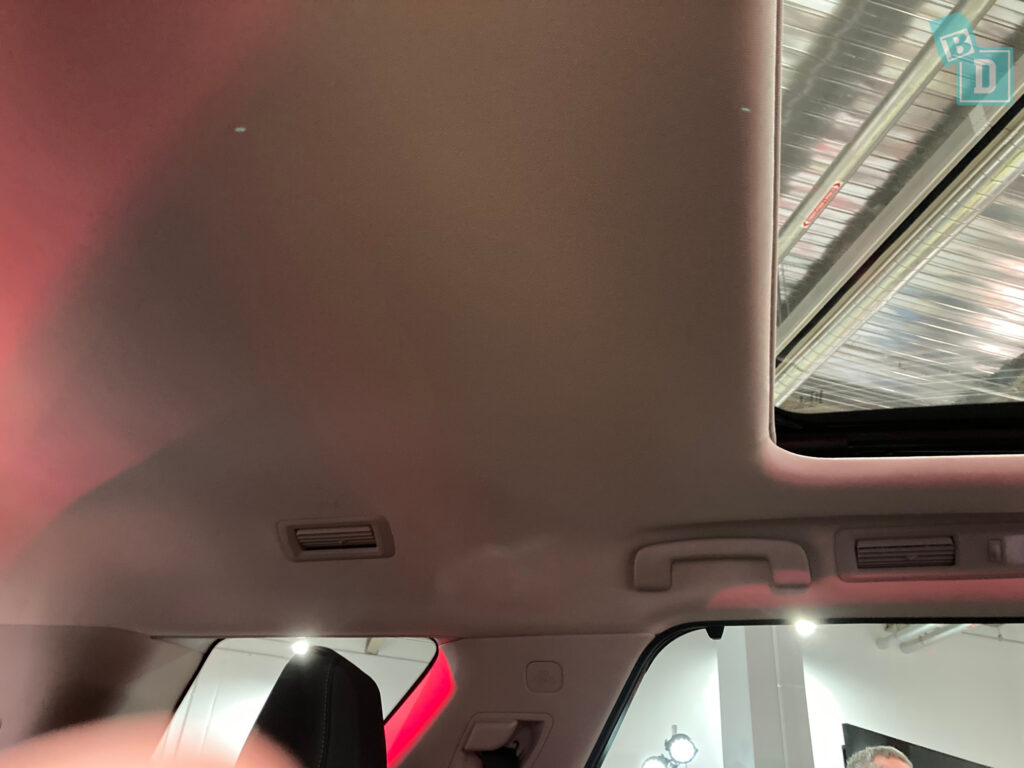 There are controls in the back of the central console box and in the front so the driver can control them while driving. 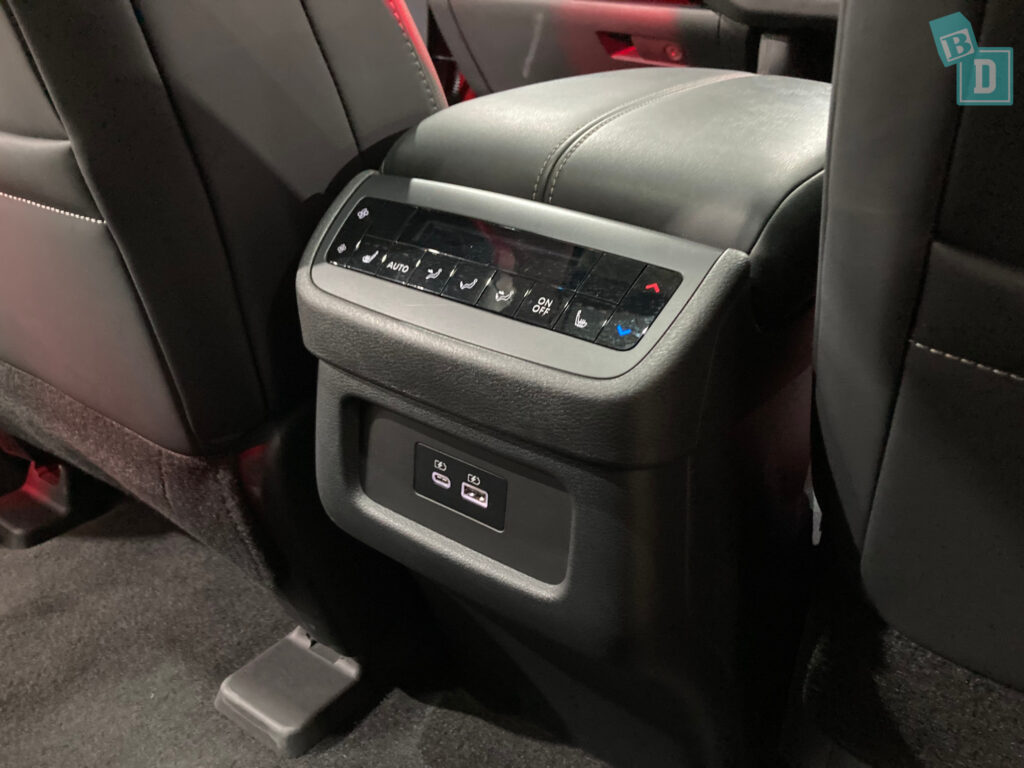 I am really pleased to see my favourite cup holders in the door have been added to with an extra one! These are in a fantastic position for all passengers but especially kids to easily reach across and access their drinks. 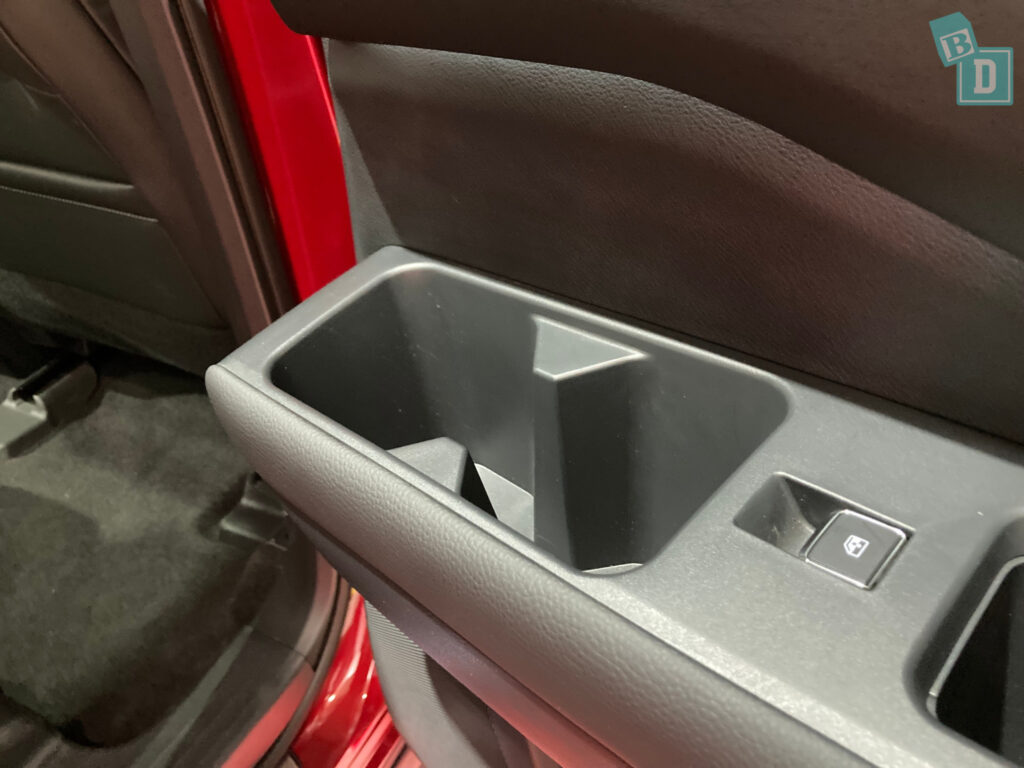 My second-favourite storage solution in the new 2023 Pathfinder is the bridge central console that gives the grown-ups a secret space of their own for their bag! 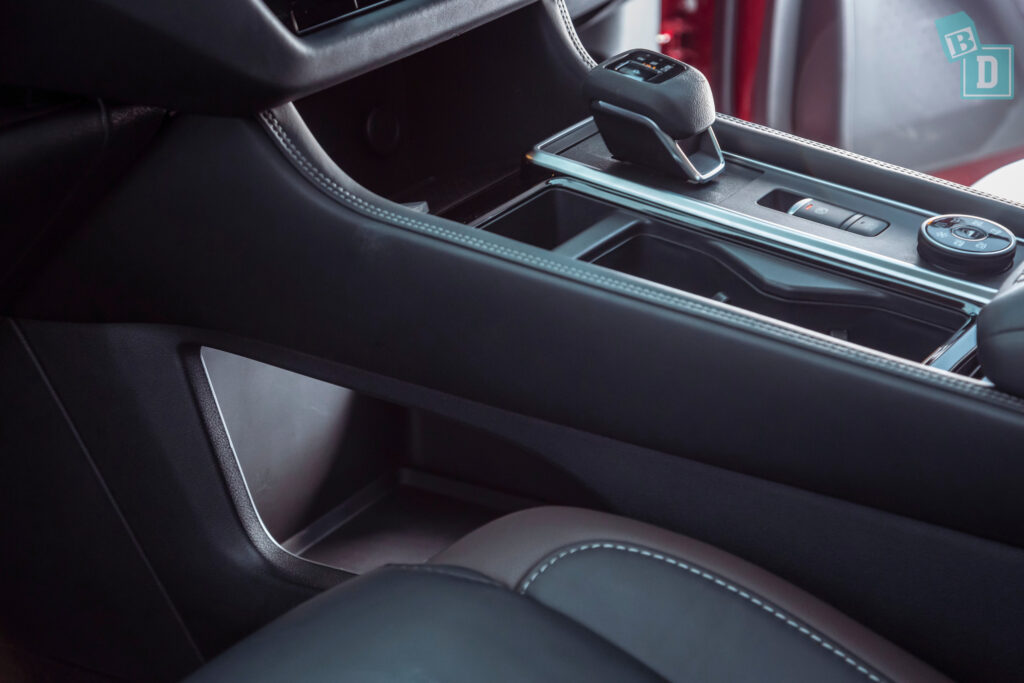 Now let's talk seats. The previous model Nissan Pathfinder was spacious and held four child seats and always had good third-row access. SO I was keen to see how in any way Nissan had improved it… 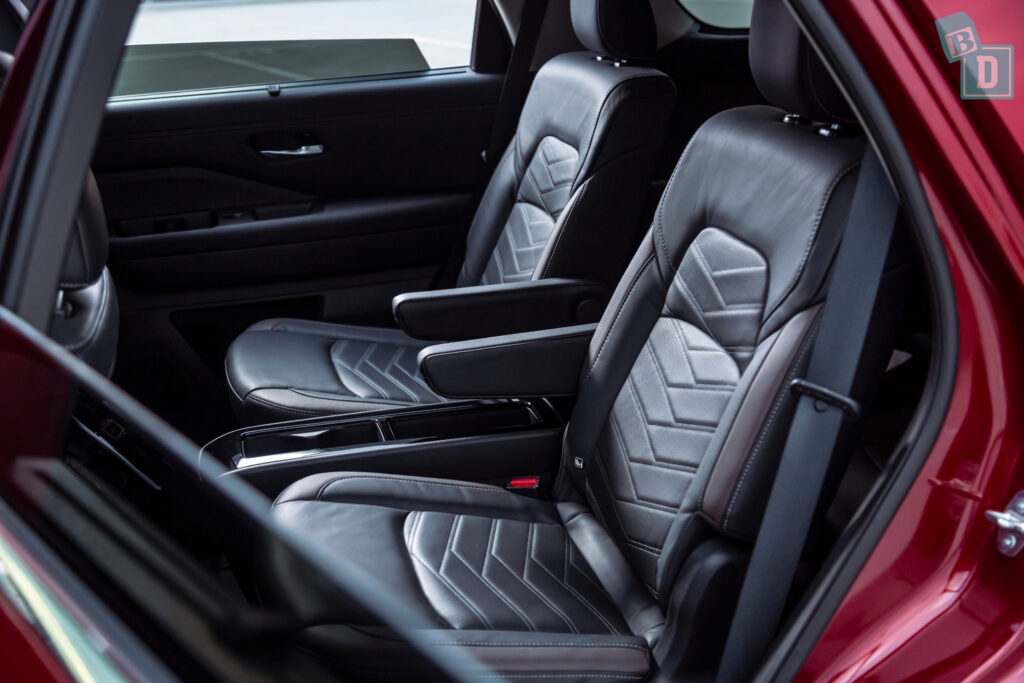 The new 2023 Nissan Pathfinder is available with two seating options. Option one, that I have got to preview today, has two captains chairs in the second row. These have a great storage central console between them that is easily removable, which will make a walkway through to the third-row seats. 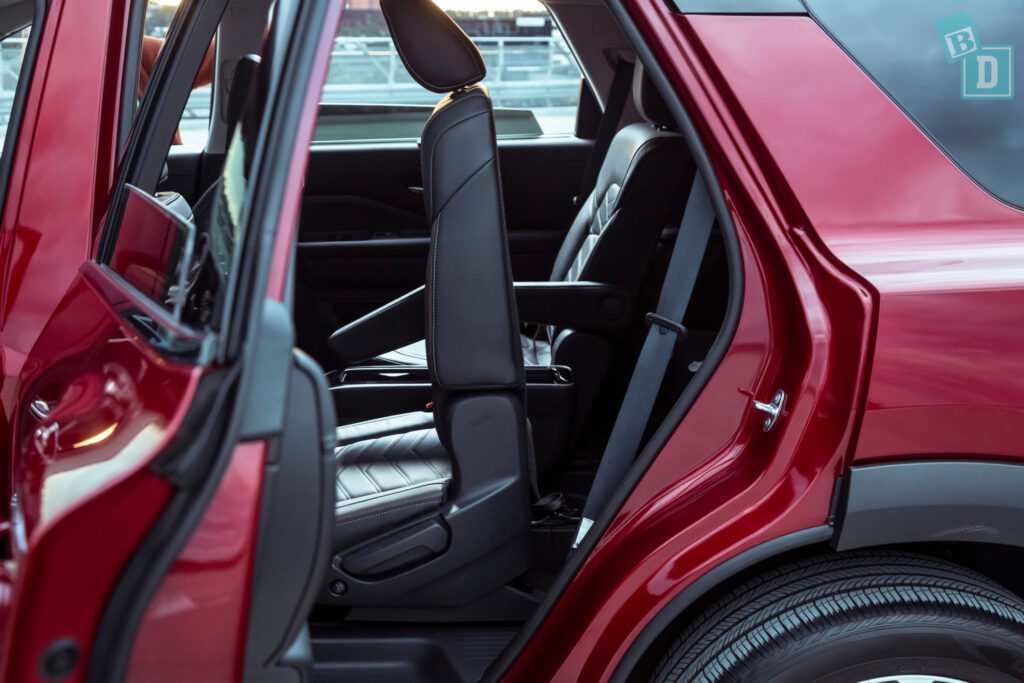 These have a simple press button on the side and backrest, to tip them forward and give a good walkthrough to the third row. 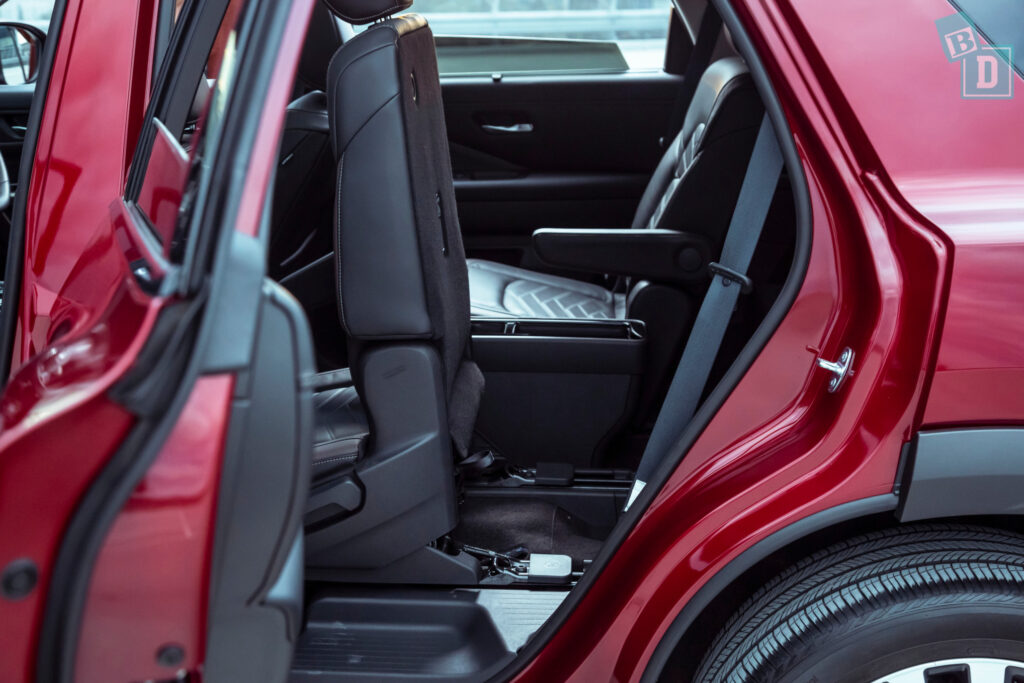 I believe this will be possible WITH ISOFIX child seats installed in them just like the old Pathfinder! I am VERY excited to test these soon with child seats for BabyDrive!

The second row is available as a bench seat, split 60:40 and there are top tether anchorages on the back of all three of those seats and ISOFIX in the two outer seats, and it also still apparently gives you good third-row access so I am looking forward to testing whether three Infasecure child seats will fit across in that seating option.

Now the previous model Pathfinder had fantastic booth space when using all three rows of seats, as you can see below…

…and this new 2023 Pathfinder looks like it's just as good as before so I look forward to doing my testing with prams and shopping bags. 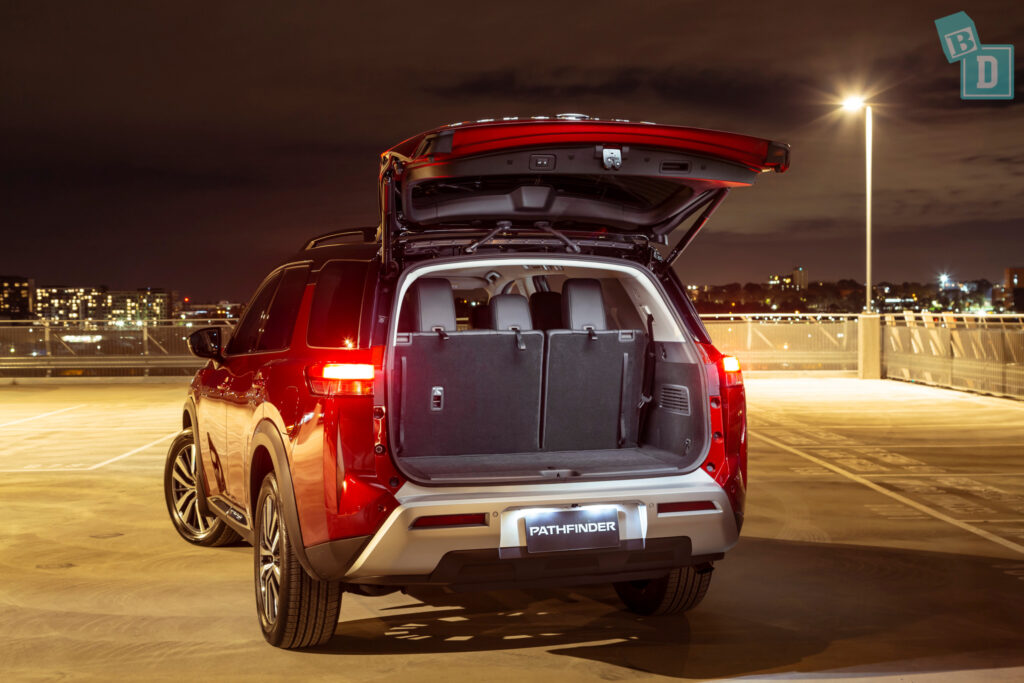 There is also a really good plastic storage space underneath the boot floor, which will be great for storing wet or secret items!

Technology has been updated, with a new 10.8-inch head-up display as standard on all 2023 Nissan Pathfinder models and a “smart” rearview mirror that turns into a screen to give you better visibility out of the back, which is handy when you have child seats installed. 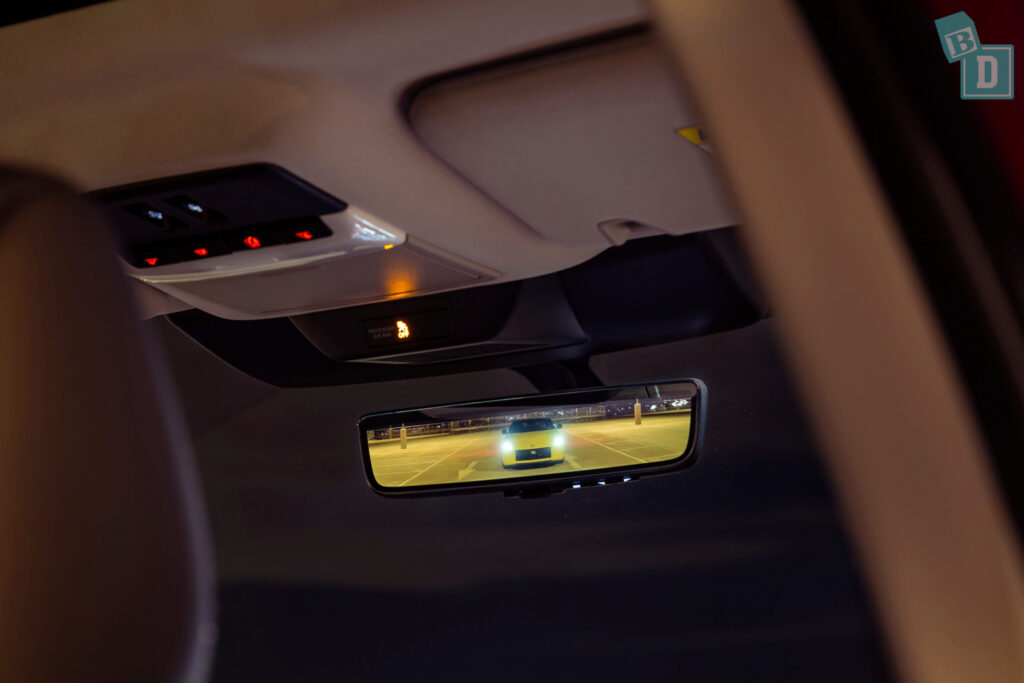 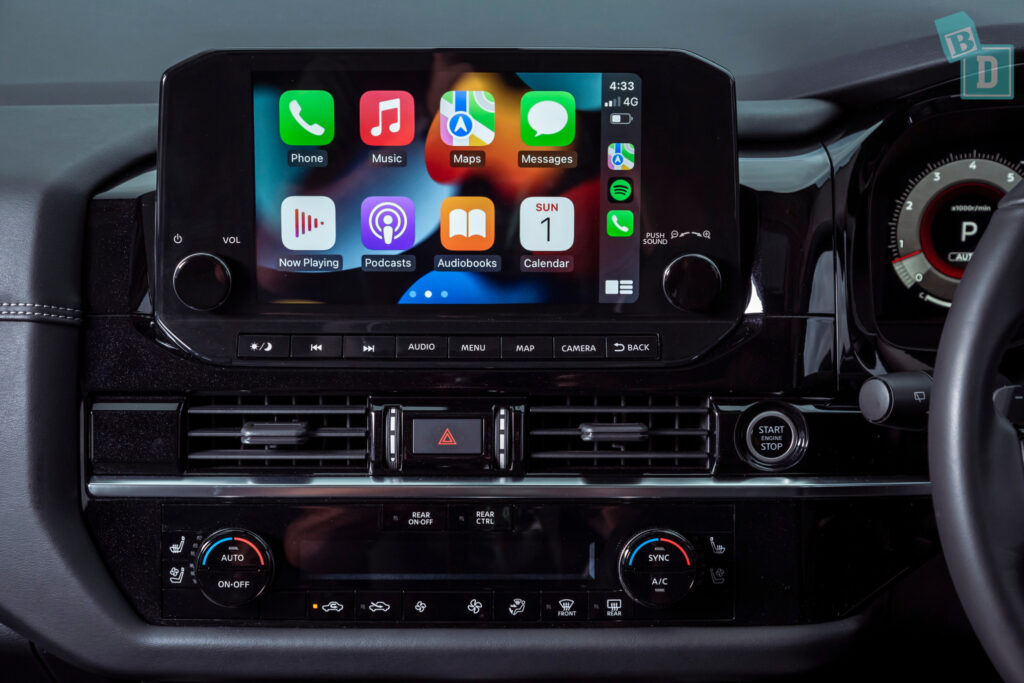 There are 4 USB charging points throughout the new 2023 Nissan Pathfinder and two 12V sockets. 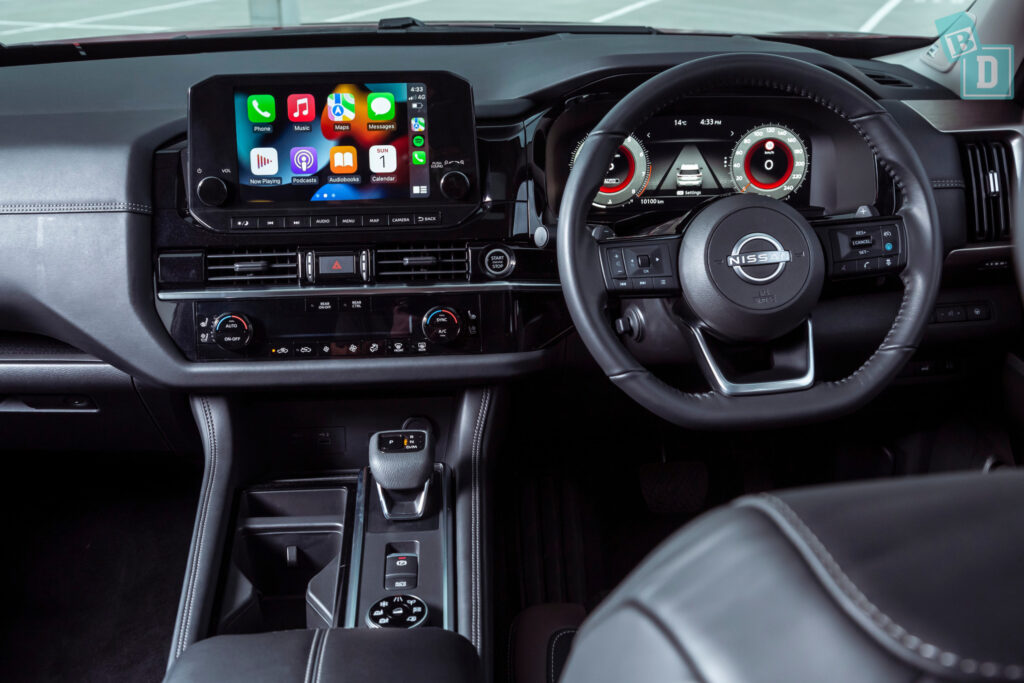 The digital driver's display clearly shows your distance to empty, seatbelt removal visual and lets you adjust some of the safety features. 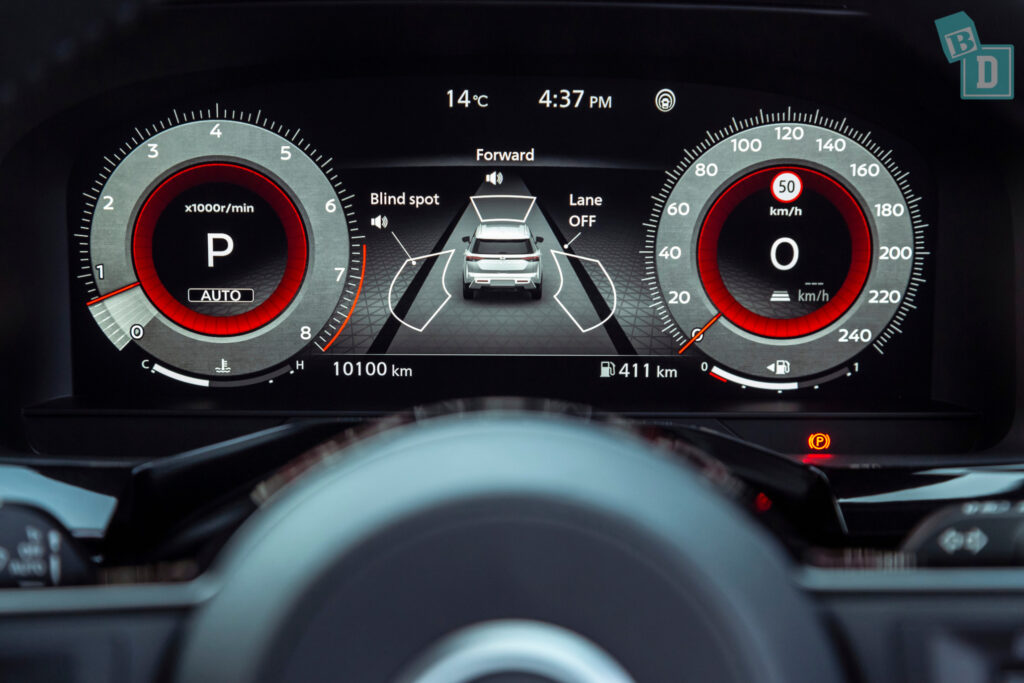 The new 2023 Nissan Pathfinder comes with nine airbags, including curtain airbags in all three rows as well and a full safety technology suite. 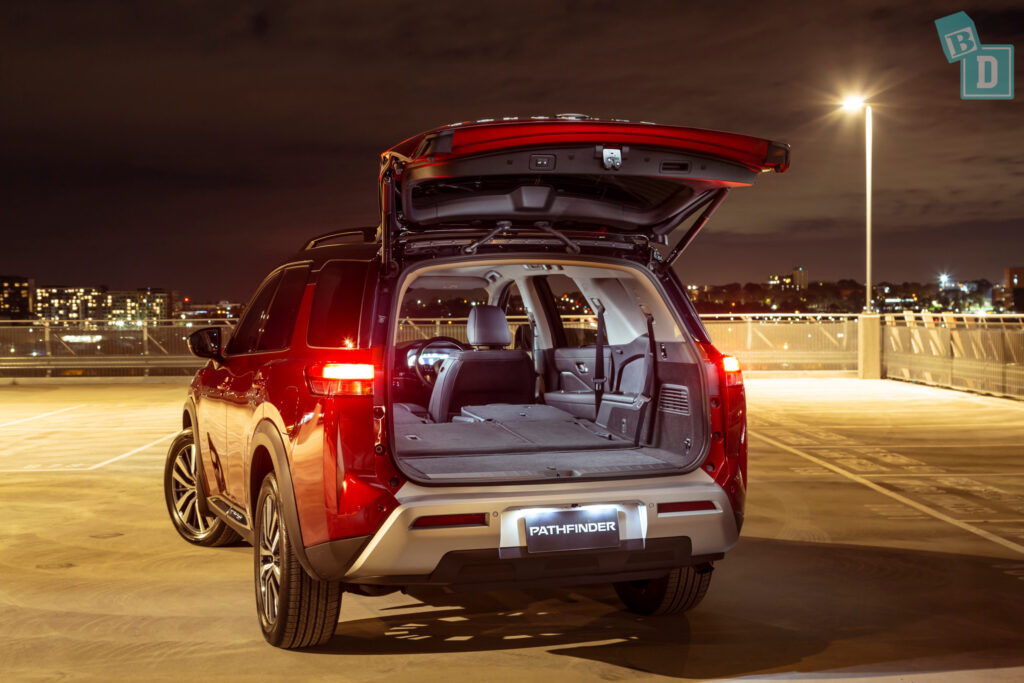 The power-operated tailgate is available in all but the base model of the 2023 Nissan Pathfinder, perfect to make going to and from the car with kids and their ‘stuff' much easier for families. 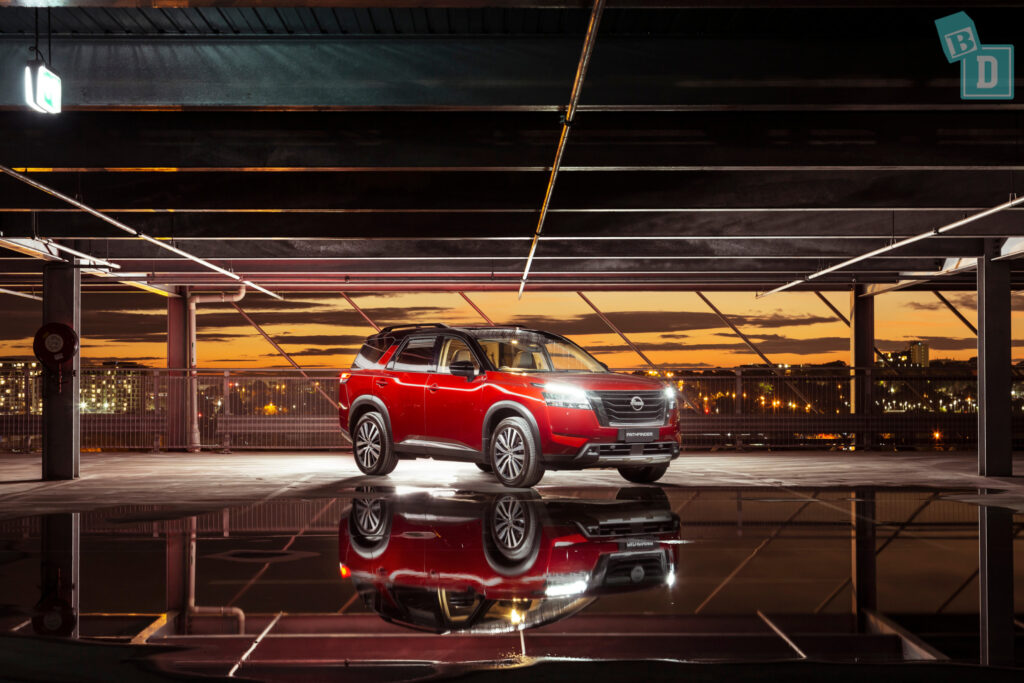 I haven’t driven the new 2023 Nissan Pathfinder yet, I am really looking forward to testing it out with my family with all its new features and new seating configurations. 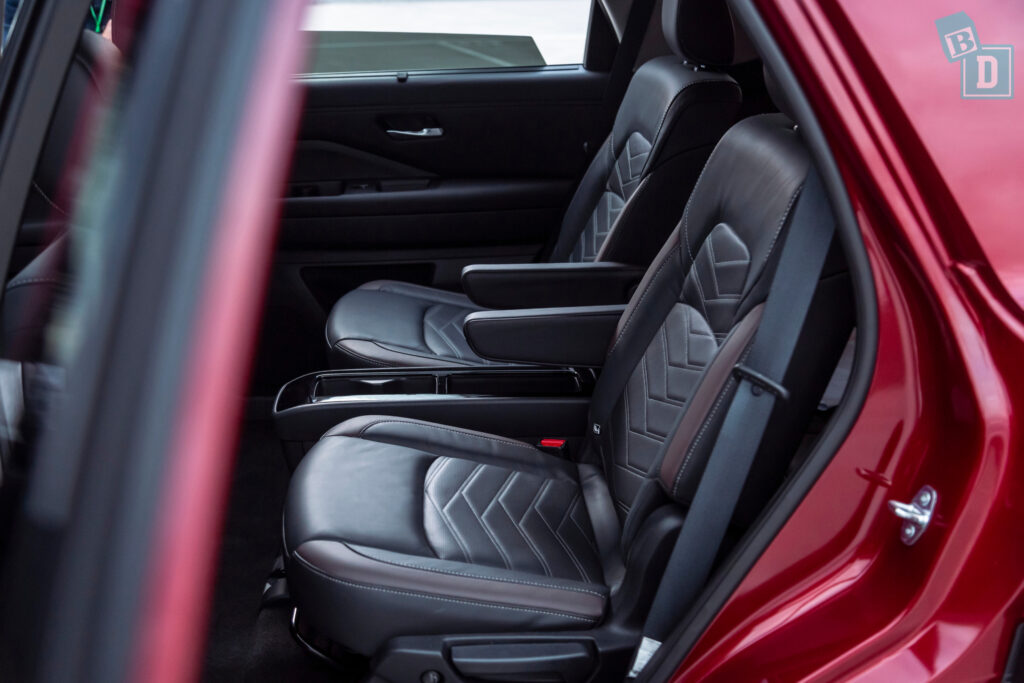 Towing capacity of the 2023 Nissan Pathfinder has been increased to 2700kg which is great news for family holidays!

The new Pathfinder looks fantastic on the inside and outside. It is full of great new features and functions that I think families are going to love. The 2023 Pathfinder promises to be a stylish and practical large SUV for families, appealing to families both big and small.

Be notified as soon as our full 2023 Nissan Pathfinder review is published by following our social media channels:

The Toyota C-HR lacks the legroom for a grown adult in front of a rear-facing child seat! I could fit two child seats in the back but the boot only just closed with a stroller in there! Read More

2021 Kia Niro review: Is the PHEV or EV better for families?