It was a fantastic day where I was driven and instructed by some world-renowned Australian racing drivers, some of which I get the pleasure of interviewing!

I had a cup of tea, a giggle and a chat with Steve Pizzati, racing driver and driving instructor for Audi Australia, well known for his role as Top Gear Australia presenter. Steve also presented alongside UK Top Gear and Grand Tour presenters Jeremy Clarkson, Richard Hammond and James May on the World Grand Tour. 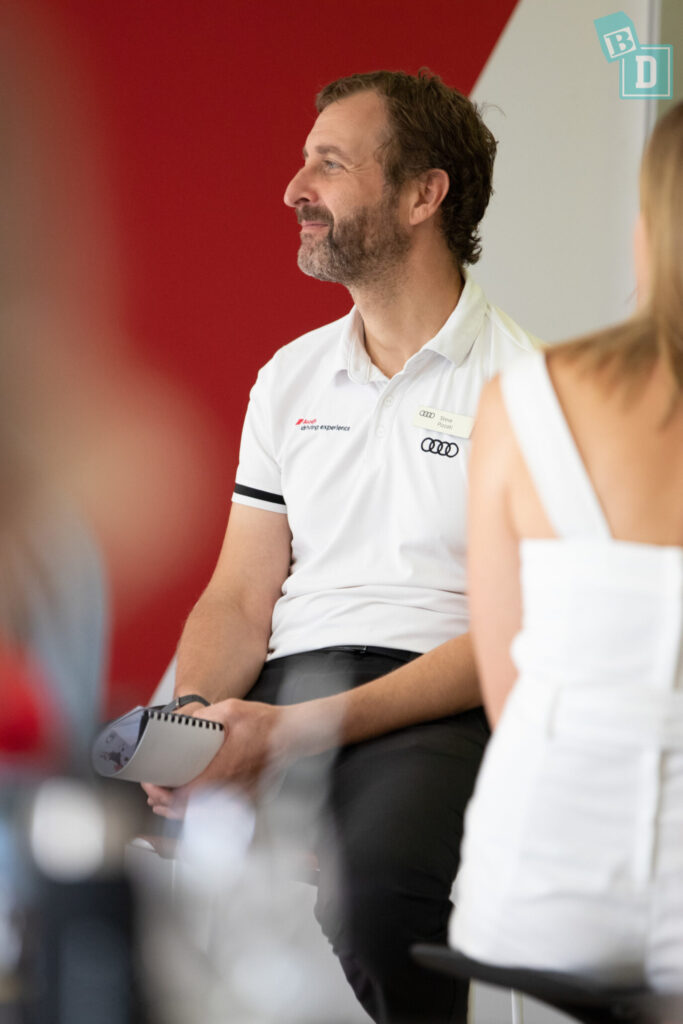 A 1971 Mark2 Cortina. It was metallic pea green, manual thing and I modified it and did all sorts of stuff but I was racing at the same time so most of my money went into motorsport so I couldn't do too much.

Did your car have a name?

It did, it was called The Queen Anne. We were three close mates and I was the youngest of the three, so the oldest of the three of us got his licence eight months before me and he got big Holden Kingswood from the '70s and it was huge so we said ‘look at it, it's like the Queen Mary'. So that was the start of it, so when Roger got his license next, he also got a large Flacon so that was QE2, The Queen Elizabeth. So I ended up with this little Cortina so we looked it up and apparently Queen Anne was quite petite so I ended up with The Queen Anne!

Did you ever race it?

No, it was a pile of junk, the rust in it would have exploded so it was just a run around car, all my money went into the racing.

We were a Holden family, so we had a Kingwood in the family and a Torana. The big one and the medium sized one, so I really went against the grain by getting a Ford, so I was almost ousted from the family! It's funny because people don't care about cars until you have the one that's opposite to the one they've got, and then everybody cared!

Were the family cars named at all?

No, one of them was like a gold colour. Like metallic urine really, so that's what we could have called it and as kids we kind of teased Dad about it!

Do you have any standout memories or car disasters?

Yes, I ended up doing pizza delivery in that car, the green Cortina, I was at Uni and had to fund the racing and was looking for part-time work. Pizza delivery was like the ultimate job, I got paid to drive and as fast as I could in most cases ‘cos I had to get the pizza there while it was still hot and I had pizza! So that was actually a really cool job! The Queen Anne delivering hot pizza all over Melbourne.

So what car do you drive now?

I have the Audi RS6, so the most powerful station wagon on earth so if I could do pizza delivery now I could do a lot of them, very quickly! There is a lot of space and it's very fast!

It's a V8, the RS6 is an incredible car, it's incredibly fast and it's a station wagon so most people don't pay attention to it on the road. I like that it's very understated, very, Audi, I suppose, but when you want it to go it goes like a very fast thing! 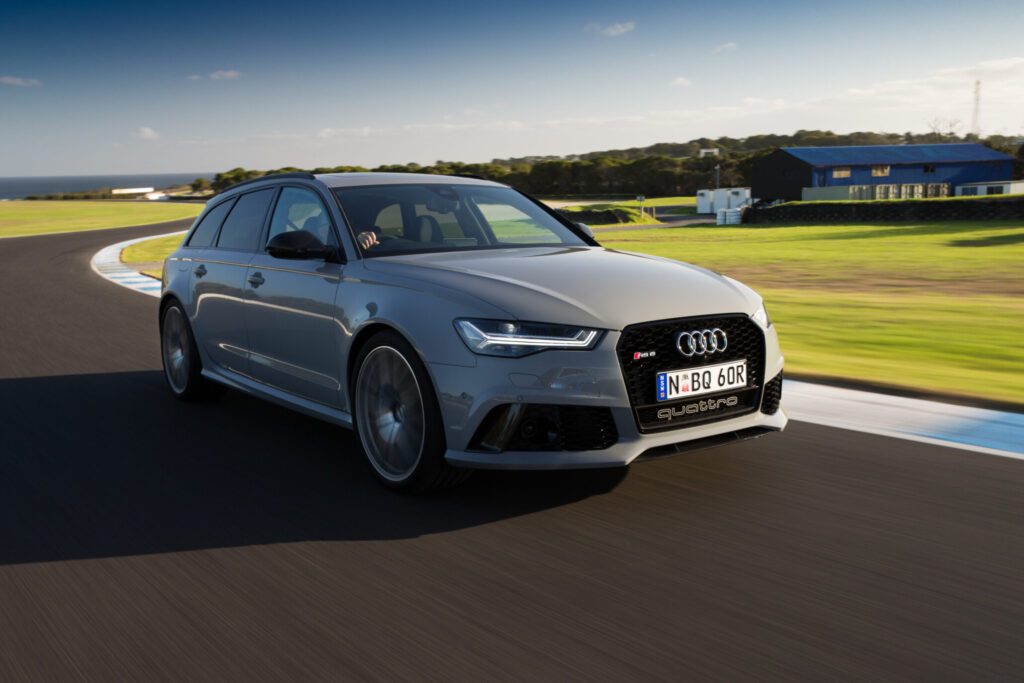 What are your favourite songs or what do you like listening to in the car?

It's funny, you ask that and everybody says the same thing, “I've got an eclectic taste” and I definitely fall into that category. So I'm a big fan of blues so anything from BB King and Albert King and Howel of Wolf and those guys. Then I'll also listen to some 90's hip hop, you know the stuff I listened to when I was learning to drive and driving for the first time you know. So it's a bit of a mish-mash!

Are you a podcast and audiobook man as well?

Very much so, a huge podcaster. Like most people, I'm kind of getting sick of commercial radio that's just adverts. So podcasts I listen to; I'm an engineer by trade so I'm a nerd, I listen to science podcasts, astronomy podcasts, I'm listening to one on the BBC about the history of maths believe it or not! It sounds incredibly dorky and it is, but it's also incredibly interesting as well about how the things we know about numbers has come about. So yes I love podcasts.

You are a racing driver as well and you are strapped into basically a giant child seat when you are driving?

It's exactly the same! In fact, most of those child seats are modelled off racing seats. So if you look at the seats we have in the racing cars and look at a standard child seat they are almost identical. So they've got the six-point harness, they've got the wings, the head support and nice and snug. I love looking at those things they just look like a mini version of my race car they really do! That tells us something, what we do in a high-risk environment like in a race car, and the solutions we have to keep people safe, we can them go this is the same thing we should be doing for kids. I love the fact those technologies are the same, just downscaled! We crash a lot, so we are essentially crash test dummies! 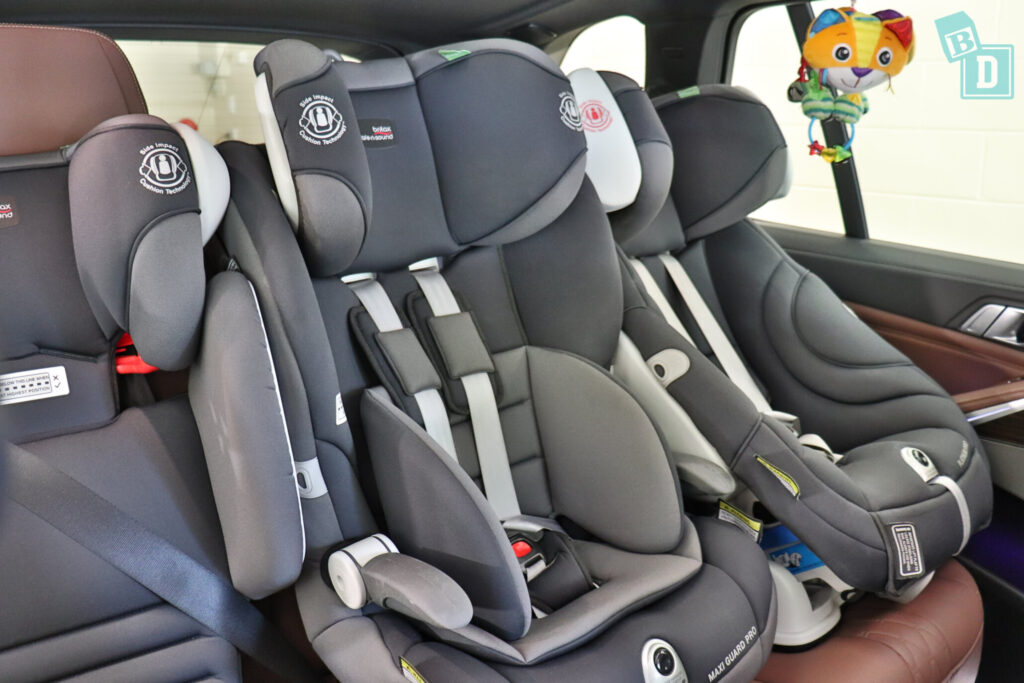 You have to stay strapped into your car seat for long periods of time and wee in them too. Any advice on what we can do to make them more comfy for the kids?

Yes, and it's something you should do yourselves too as the driver, is have the seat more upright than you think. We've got this notion that reclined is more comfortable because that's what you do on a lounge. Especially if you're going to go on a long drive, I hear this a lot that people will wind the seat back a little to make themselves more comfy. Actually, the opposite is true. You will actually tire more quickly because every time you do something your back will come slightly out of the seat and you have to support yourself. If you sit more upright the seat will support you better and you won't fatigue as quickly. It's why we do it in the race cars and it's why you should do it for say a child seat or your own driver's seat when you're driving the car. So a bit more upright, closer to the wheel and if you have the ability to make the seat more snug then do. 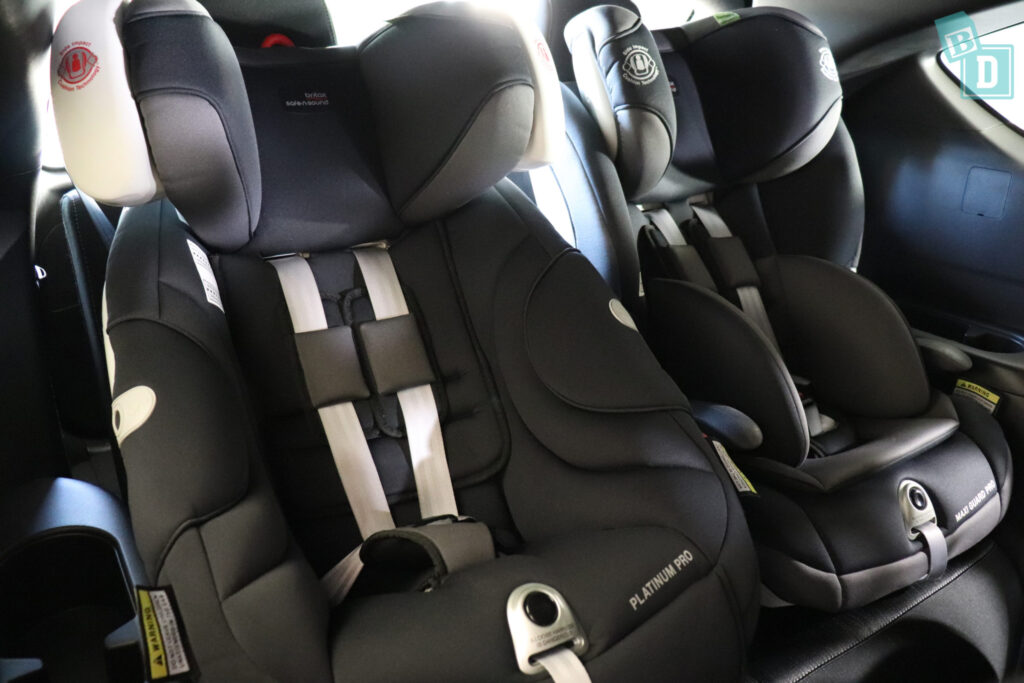 Any advice for parents who are driving either distracted or very tired?!

Ideally, I'd just say don't. I suppose the first tactic of solving a problem is knowing its existence. So I think if you can acknowledge that you are tired or distracted then at least you are aware of it and start to come up with solutions. Understanding that you are compromised you can then come up with other solutions. If that means you've got to stop more, or you've got to try and ignore them while you are doing critical things, like driving a car, but it is incredibly challenging yes.

Do you ever drive with kids in the car?

I don't have kids of my own, I am Uncle Stevie to a lot of nieces and nephews, which is cool; I love them!

What do they think of your driving? Do they ever comment?

They always say “go faster, go faster! Why don't you do what you do in the race car? Come on!”

So they're actually annoyed that I'm driving so slow whih is just the road limit. I have taken most of them around the track and had a bit of fun. I haven't gone properly fast but I've gone fast enough and they love it! They think it's the best thing ever! 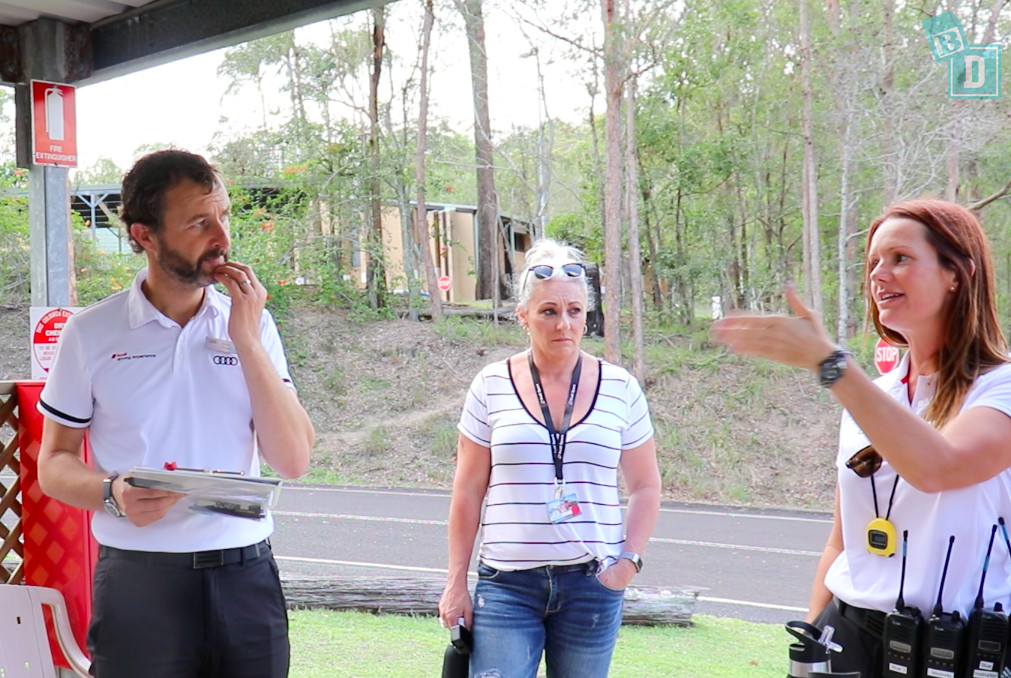 Have you got any funny anecdotes from having kids in the car?

Other than wanting me to drive faster, occasionally I'll do silly things in the car, like having the practice from motorsport if there's a particular song they like I'll make the car kind of dance to it a bit in the traffic.

My Dad used to take his hands off the steering wheel and drive with his knees for a certain part of Bruce Springsteen track when we were kids! 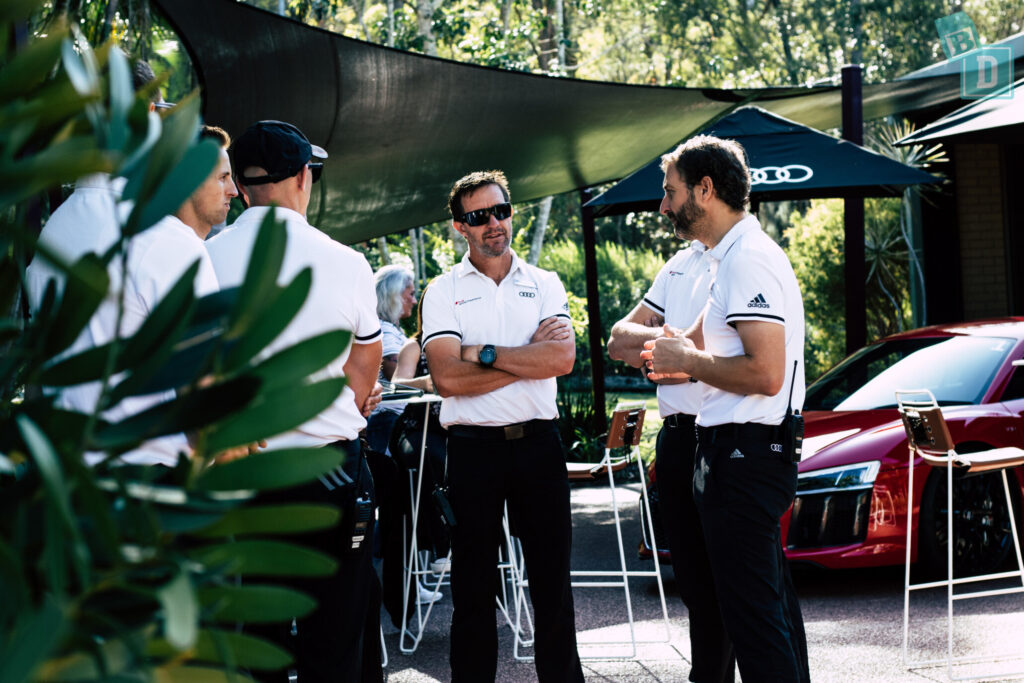 You facilitate the Audi driving experiences for both men and women. Who would you say are the better driver? Men or women?

I would say, that men are better drivers because more men are interested in their driving. Women are better students, there is no reason why a woman can't be as good as a man or better, it's just that on the whole, as a population more men are into their driving and developing their driving. It's just that guys tend to gravitate more towards it and if you do something enough, you get better at it and that's purely it! Females are definitely the better students, females listen much more readily than guys do. Guys come to these days expecting to be good, expecting to impress you as the pro driver and maybe even wanting to be discovered! 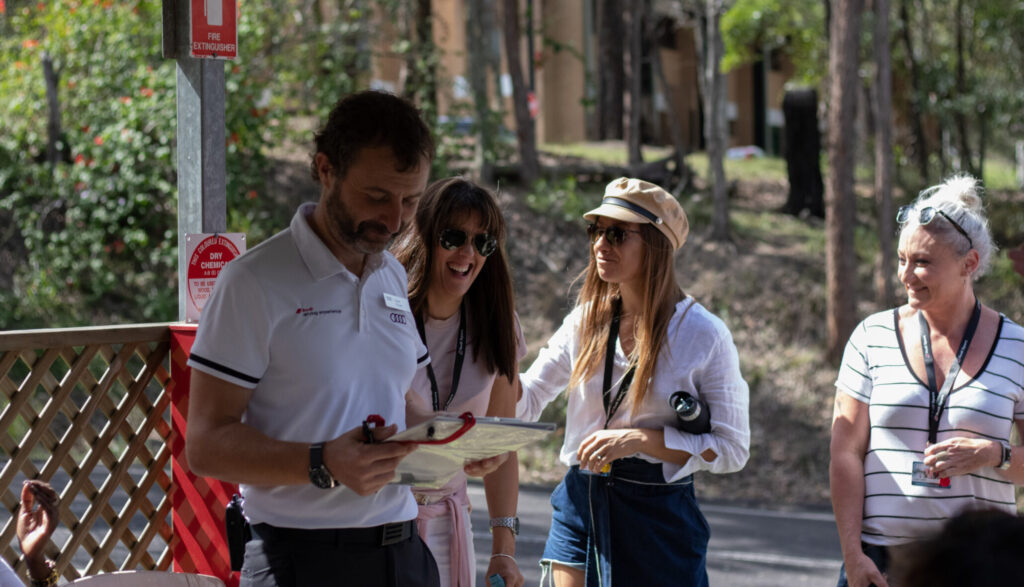 Do you ever have couples on these days and do they get competitive?

Yes we do, and they do but we actually split couples up and force them to not be in the car together. For the simple reason that you two drive together a lot and instead of having the same thing “I told you so” or, “you see, this is what I've been saying for years”. Both genders it can go either way. It's just easier to keep them split, learn your stuff and then, later on, you can discuss what you thought or felt. It's just easier. 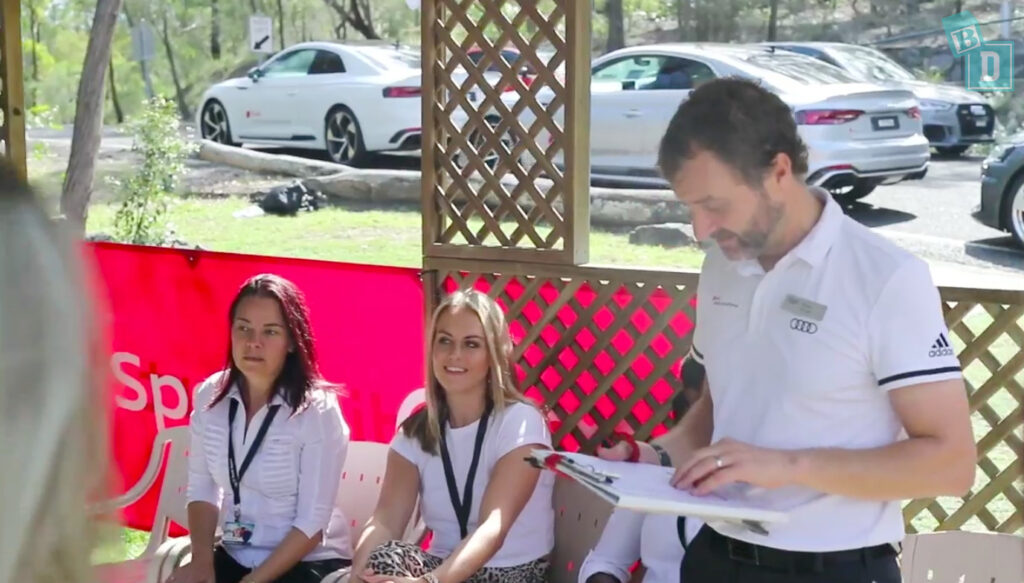 Do you have any funny anecdotes from these drive days that you are allowed to share with me?

Yeah! I've had people turn up to these drive days in full race suits. There's one guy we picked up from a hotel on the Gold Coast and it was a 30+ degree day and he was in his full quilted race suit, race boots, gloves and helmet bag. I asked his colleagues has been wearing that all morning? They said yes, he actually came down to breakfast and actually ate with the gloves on. So yes, some people are very, very eager to be with us on the day! 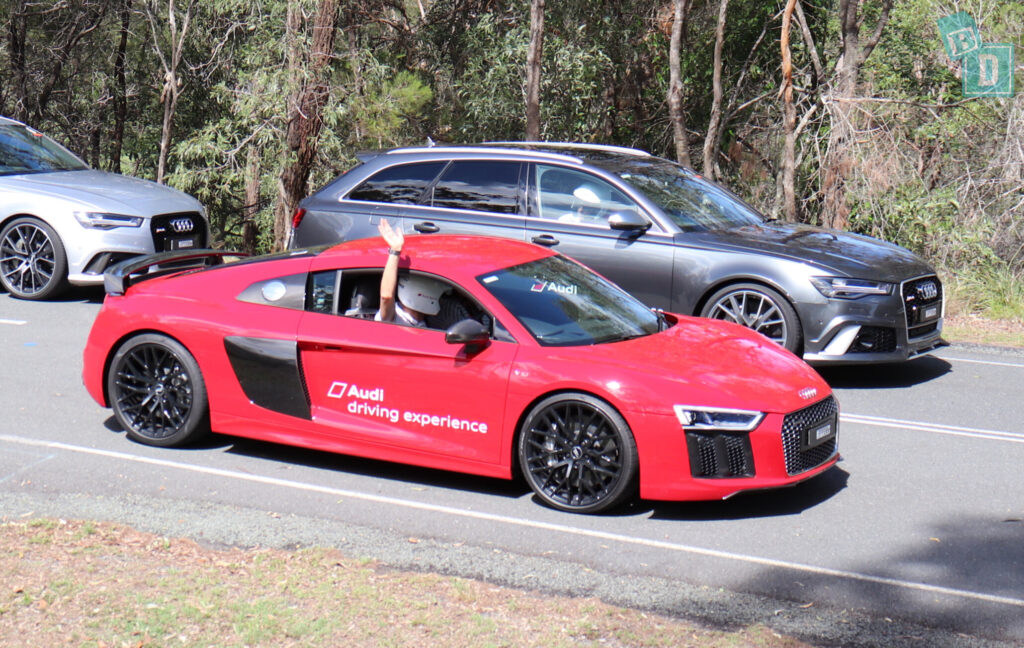 Does anyone ever crash?

Yes, they do. Very rarely but it does happen. As I say I have been doing this for over 20 years and you can't expect to do these drive days for that long without it. No one has ever been hurt, but you do this for that long and you are going to get crashes. 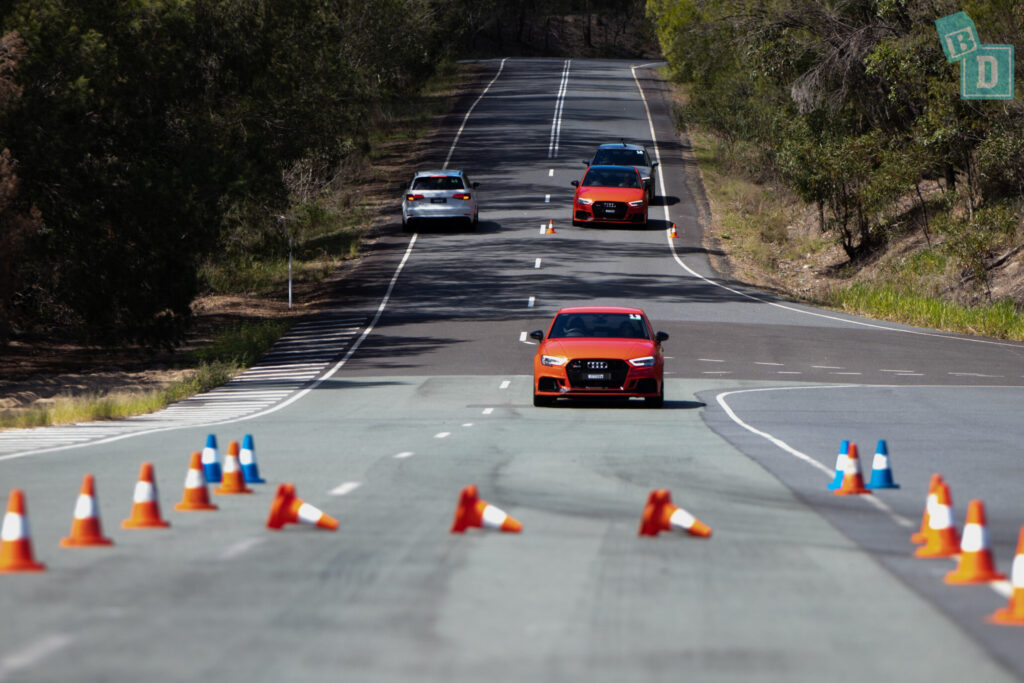 It was an absolute pleasure interviewing Steve and a lot of fun! To watch more from the day including my interview Audi Ambassador Lisa Wilkinson and see what the day entailed click here. Also see Steve, Lisa and female racing driver and instructor Melinda Price discuss being a female racing driver in a male-dominated sport here.