It's one thing to have a car to test for its family-friendliness for a week but what happens when we have the 2020 Kia Carnival for three months in the lead-up to, during and following the birth of our second daughter?
Will we decide if the eight-seater Kia Carnival is too much car for a family of four? What it is like to sit in the back and be chauffeur driven when I'm not able to drive for almost two months after a cesarean? Is the Kia Carnival a comfortable car to drive when heavily pregnant and what it is like to get in and out of as a passenger?

This longer-term testing shows up a couple of negatives as well as a few more positives than our usual shorter testing as well as being a tribute to a model that's so loved by the BabyDrive audience (the BabyDrive Facebook page feels like the Kia Carnival owners club at times) and is about to be replaced with a hi-tech new version!

What is the Kia Carnival like to drive when pregnant? 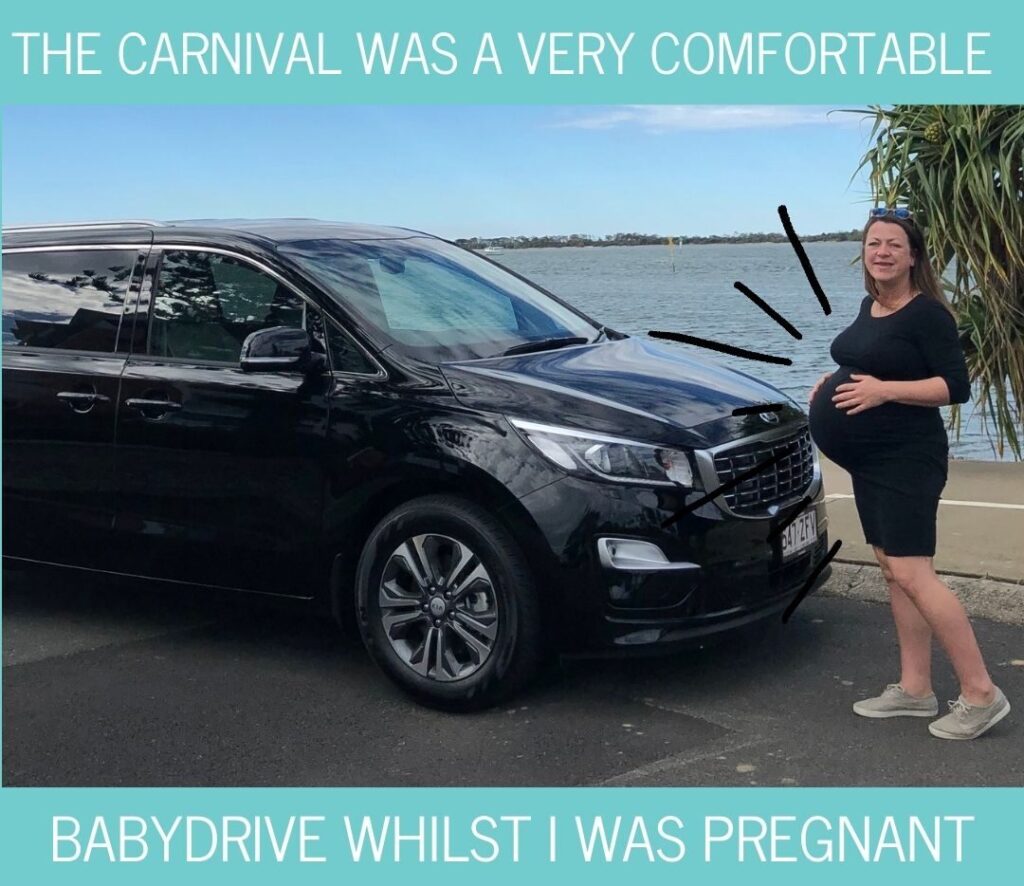 The Kia Carnival is really comfortable to drive when pregnant. I found that all the way to 40 weeks I could still reach the pedals and fit my pregnant bump behind the wheel without it touching or rubbing, which was not the case in other cars and utes I drove in that last month! 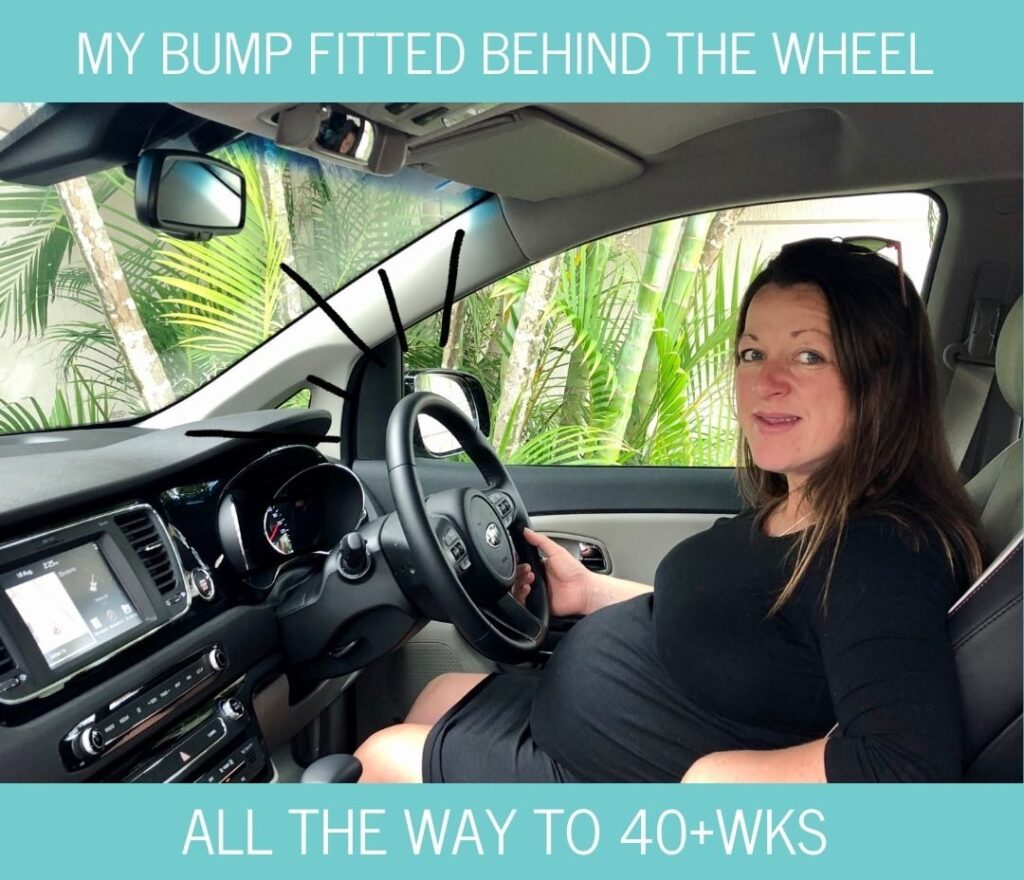 Also getting in and out of the Kia Carnival while pregnant was good because it isn't too high up to climb into, like the New Isuzu D-Max I reviewed at 38 weeks! 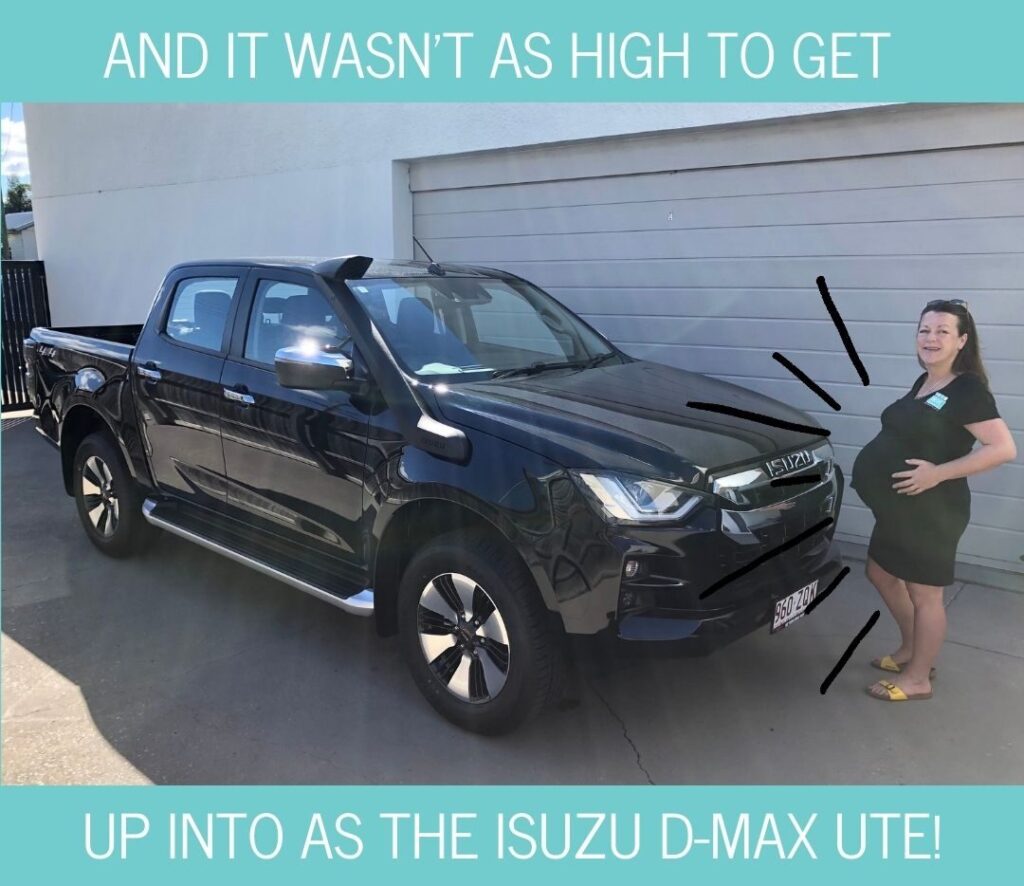 And the Kia Carnival is a lot more practical than the Aston Martin V8 Vantage I drove at the end of my previous pregnancy!! 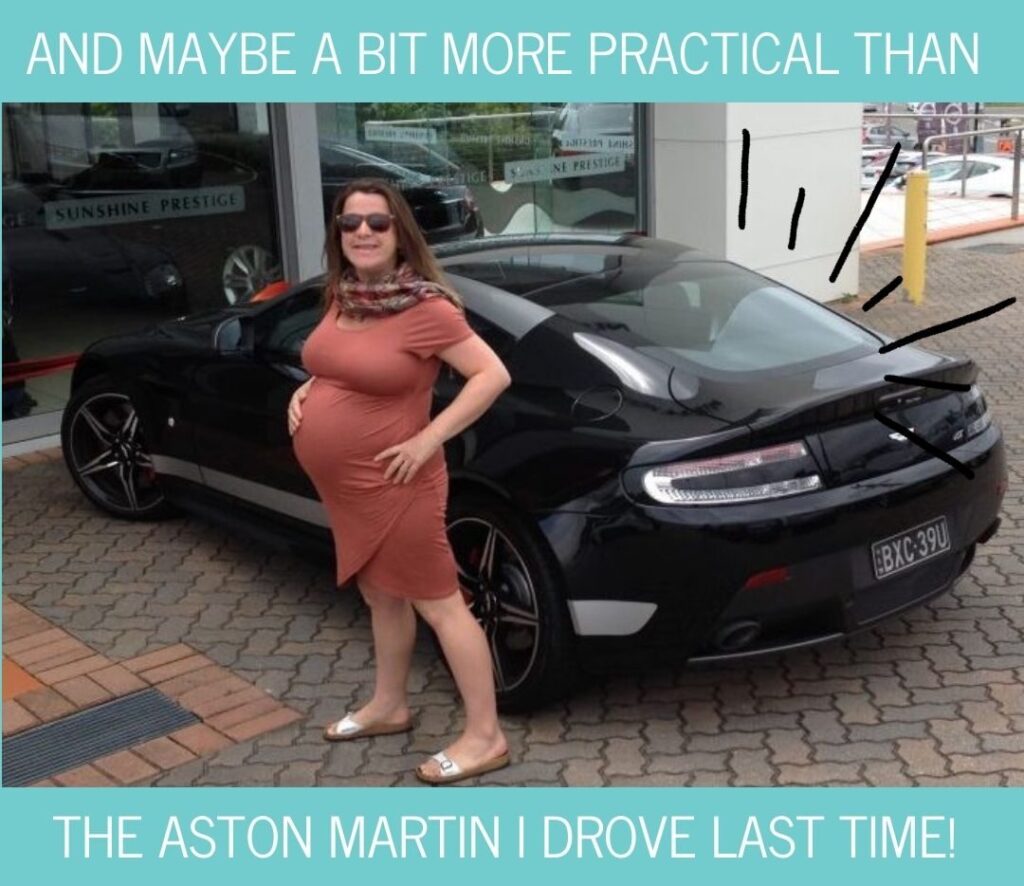 We had a month of driving the Kia Carnival leading up to the birth and even with just three of us we loved it and didn't feel like it was too big! We just enjoyed and used the space in different ways. We fitted our paddleboards in with the seats all folded down along one side of the car and still fit the three of us in and our beach gear. We enjoyed the convenience of a large car and all the family-friendly practicalities!

So then, once our little girl arrived… 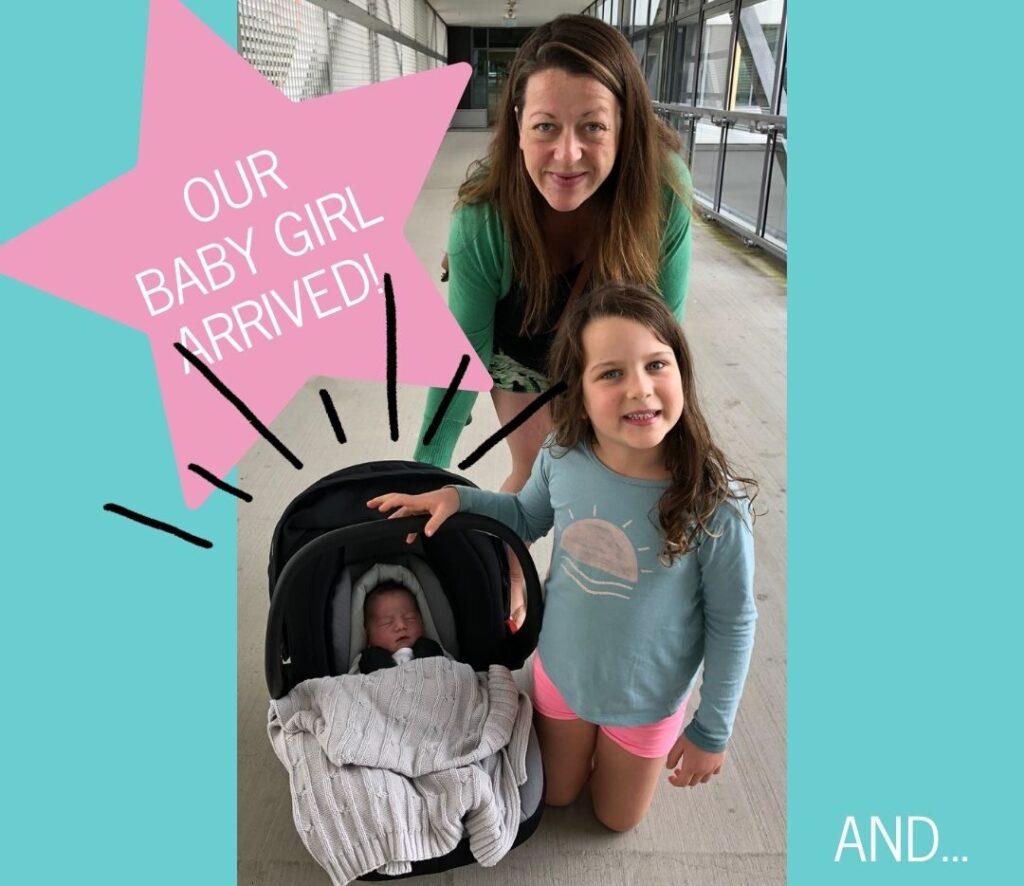 …we made way for three in the back! No more room for paddleboards 🙁 Instead, I got to ride between my two girls.

What is the Kia Carnival like to use as a family car? 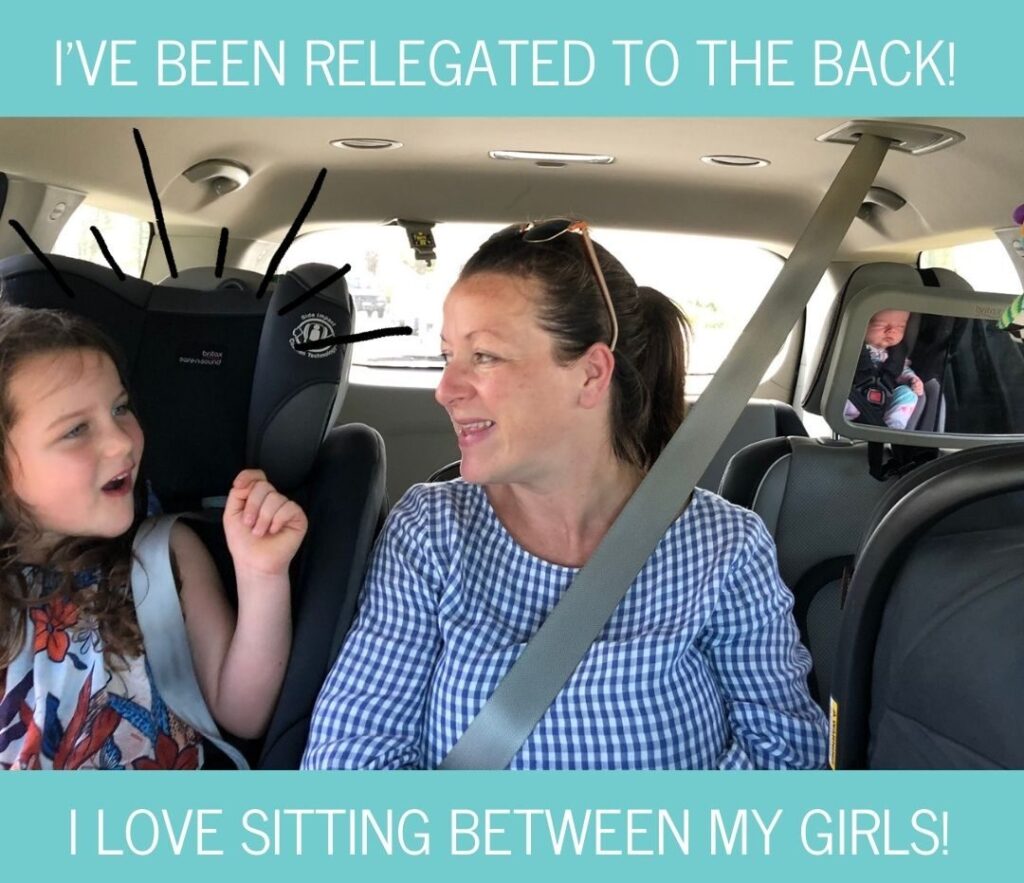 Climbing in and out of the back of the Kia Carnival and in between two child seats after a cesarean was easier than I thought it would be (although if two were rear-facing it would be another story as there isn't enough room to squeeze between rear-facing seats or capsules and the front seats and then use the removable second seat to create a gangway to the third row).

Is the eight-seater Kia Carnival is too much car for a family of four?

While we had the Kia Carnival an Instagrammer called The Minimalist Life posted how she'd discovered BabyDrive and that we'd helped her choose a family car… Yes a Carnival (it was that or a Mazda CX-9, upgrading from a Corolla of all cars). She said because she has two rear-facing seats in the second row it meant that the in-laws would get into the third row through the boot!

“I. AM. OBSESSED. I thought it would be overkill with just two littlies but it's so convenient and spacious and their bl@@dy car seats take up so much space,” she said in a message when I asked how the Carnival was going.

“We go to the beach a lot so it's perfect for the wagon and tent and all the other stuff that goes along with them. I reckon I'll keep it forever. I don't think I can go back. The selling point for me was that before buying the Carnival, I didn't speak to one person who didn't like it. In fact they all raved about it!”

OK, back to the story. The grab handles in the ceiling and on the side pillar really help and there is no hump in the second-row footwell so I can more easily walk through. Even at 162cm I don't feel cramped. It does highlight my first negative; the central seatbelt comes from the ceiling and it cuts across my neck and hurts on every journey (don't worry about my older daughter's unfastened harness in the photo, we took it at the end of a journey). 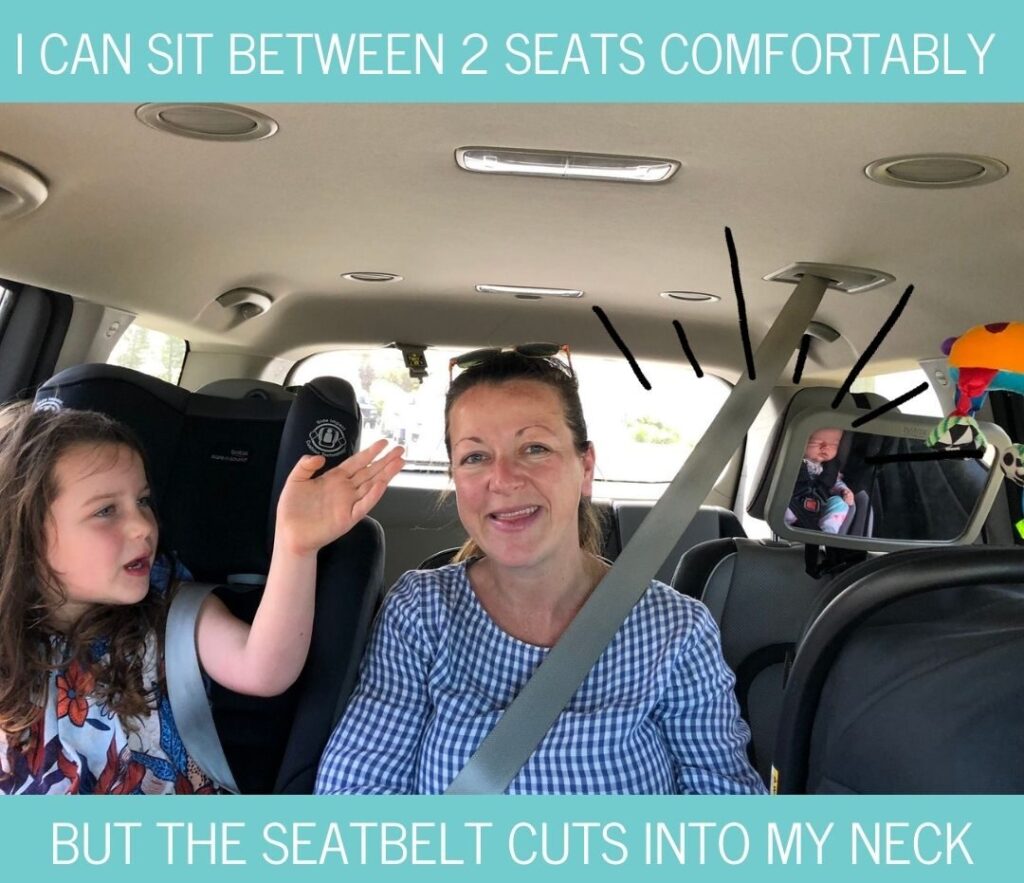 Even Daddy fits in the back between two child seats and he's 186cm! 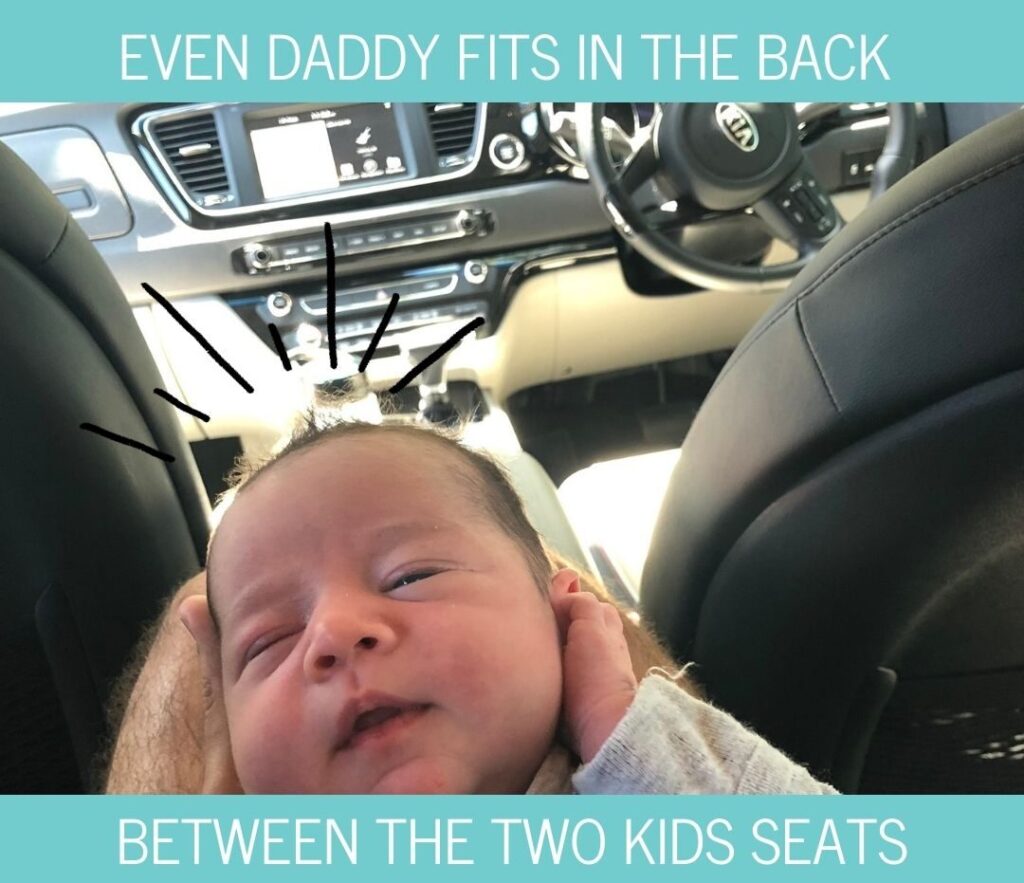 What it is like to sit in the back and be chauffeur driven when I'm not able to drive for almost two months after a cesarean?

Although I missed driving while out of action for more than 6 weeks of caesarean recovery, I did enjoy sitting between my girls. That said, I did miss having adult conversations in the front but the conversation mirror meant I could still chat and communicate with Hubby in the front without him turning around while he was driving. I'm also sure HE secretly enjoyed chauffeuring his three girls around!! 😉 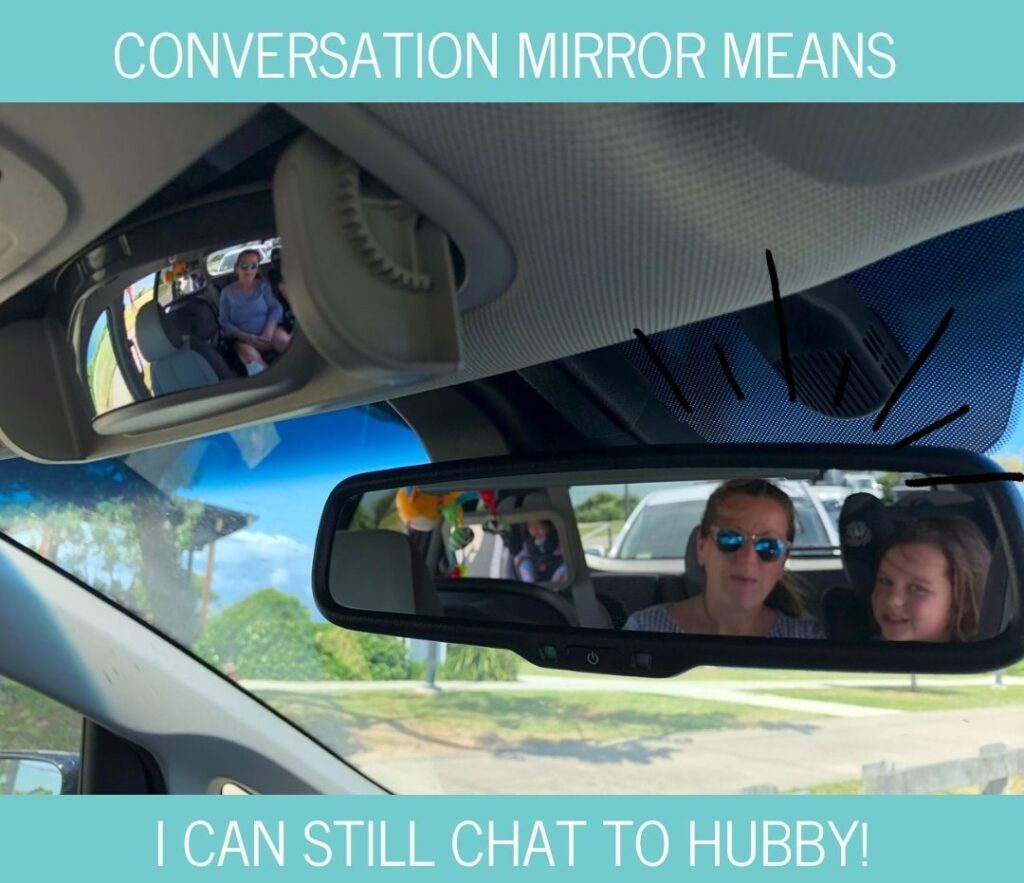 Bub loves her infant capsule and sleeping in the car, which was a huge surprise to us all after our first daughter screamed every time she went in the car for the first 18 months of her life! 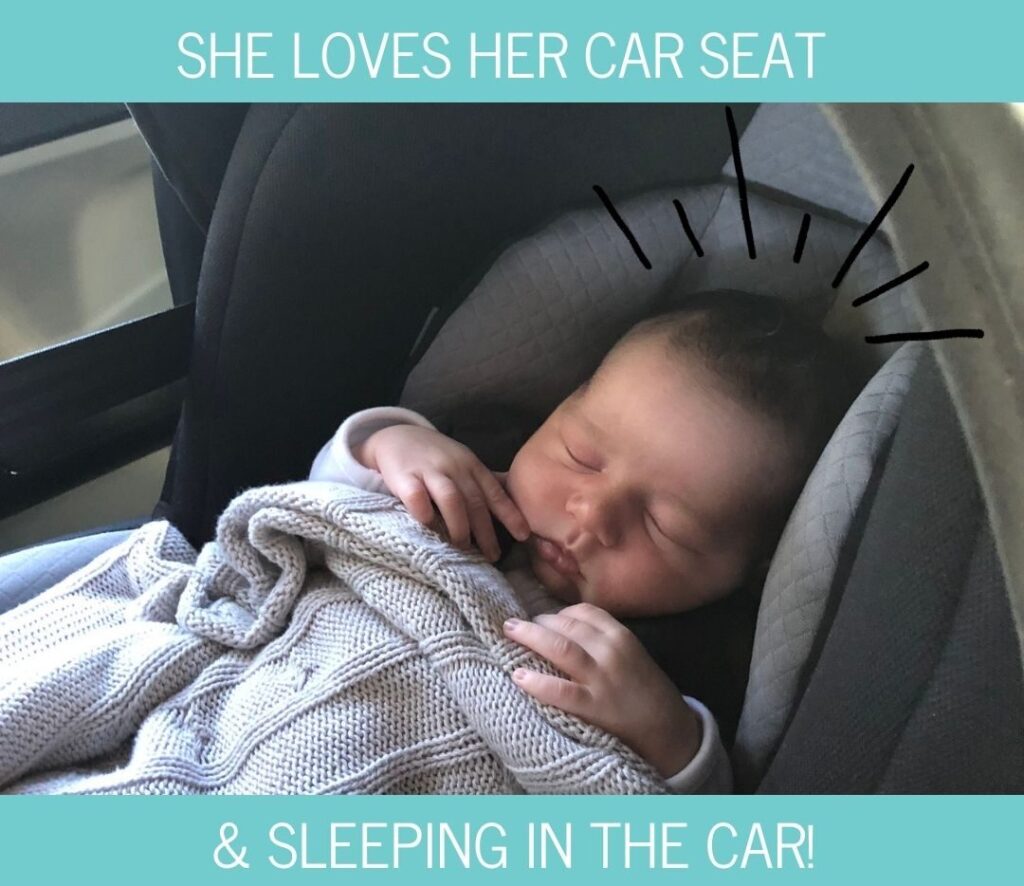 Installing the base of the capsule is easy with the ISOFix and top tether anchorage however I forget how fiddly these little tiny newborns are to get in and out of their seats! I find my second negative; with the second-row seats in their furthest back position the sliding door of the Kia Carnival slightly inhibits your access to get a fiddly newborn in and out of her rear-facing capsule and I feel like I can't quite access her as easily as I want to. 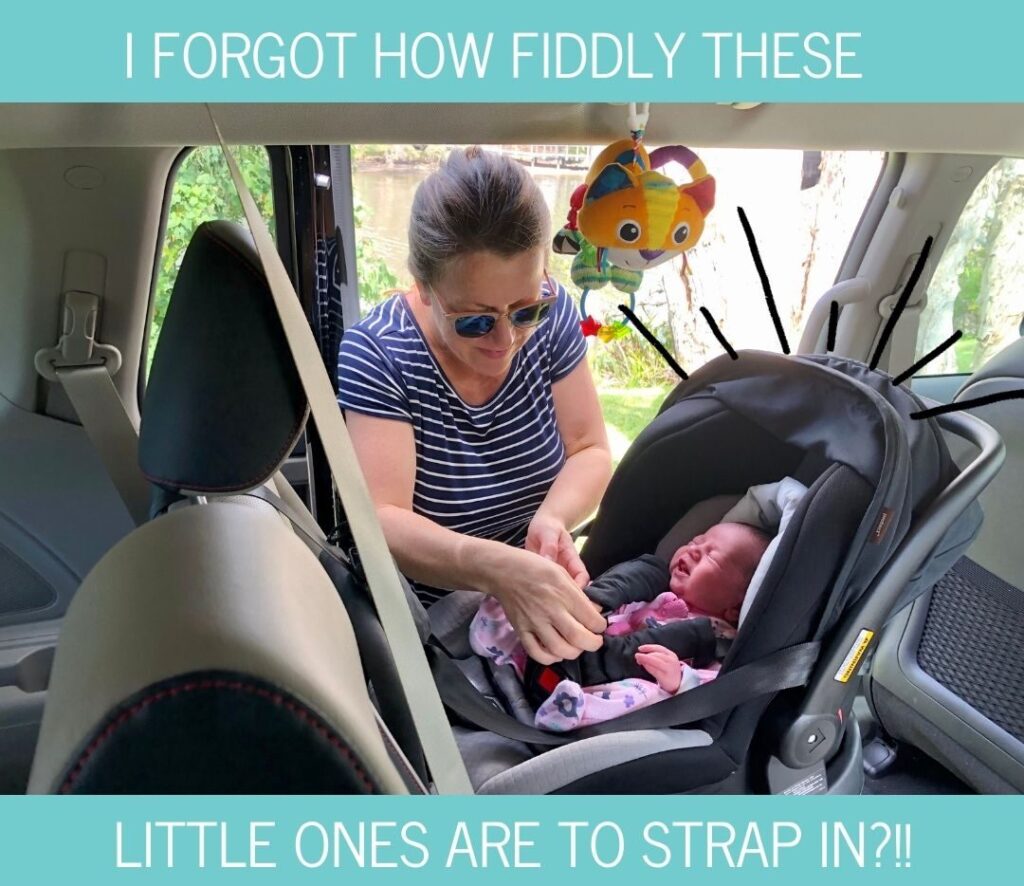 Legroom in the front and behind the rear-facing infant capsule is good and a 182cm passenger can fit in front easily. 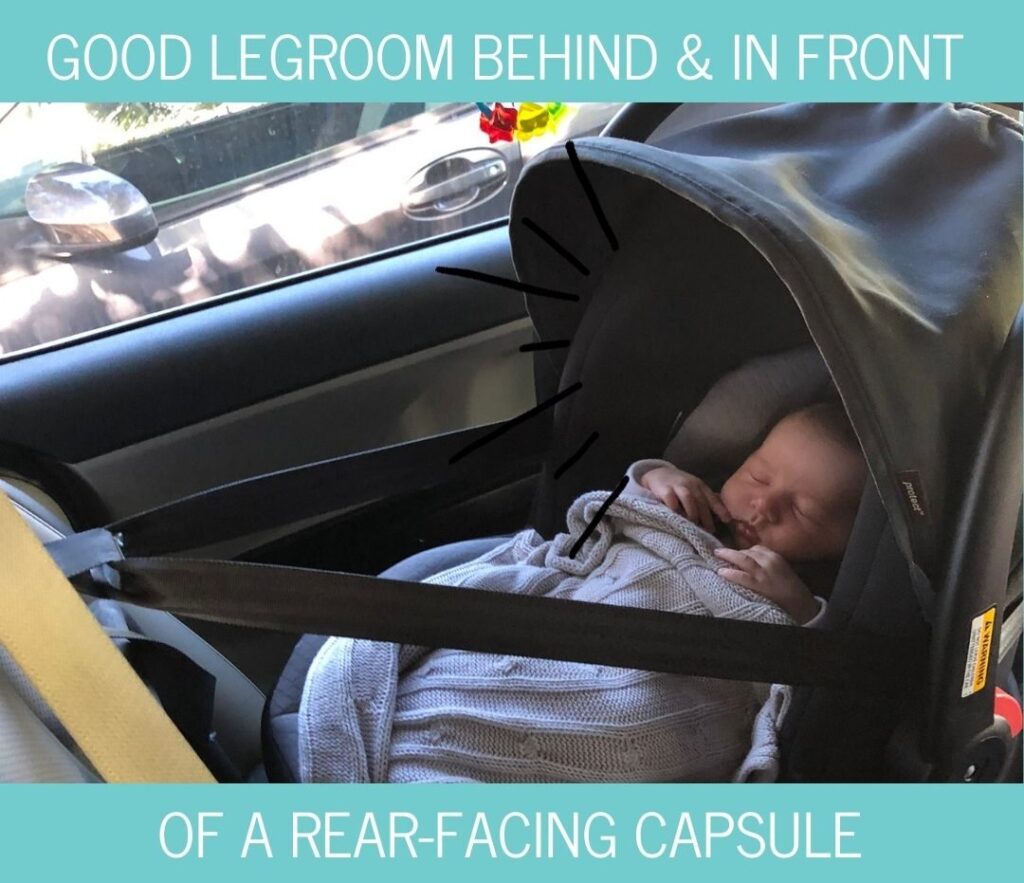 Being a newborn we need to stop to feed her a lot and I know all the local picturesque places. I also have enough room to feed her easily in the driver's seat with a forward-facing child seat in the second row behind or in the central second-row seat between two child seats! 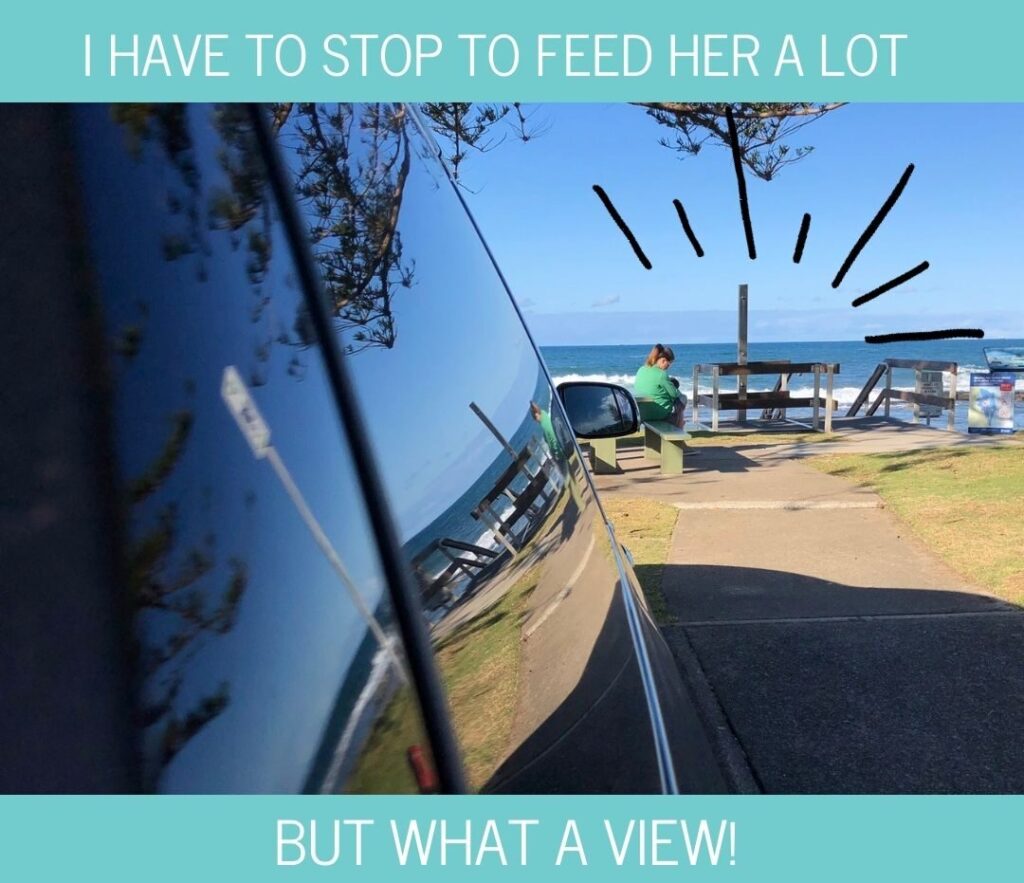 I forget just how often they feed! An hour journey can take 2! It doesn't matter when the view looks like this!! 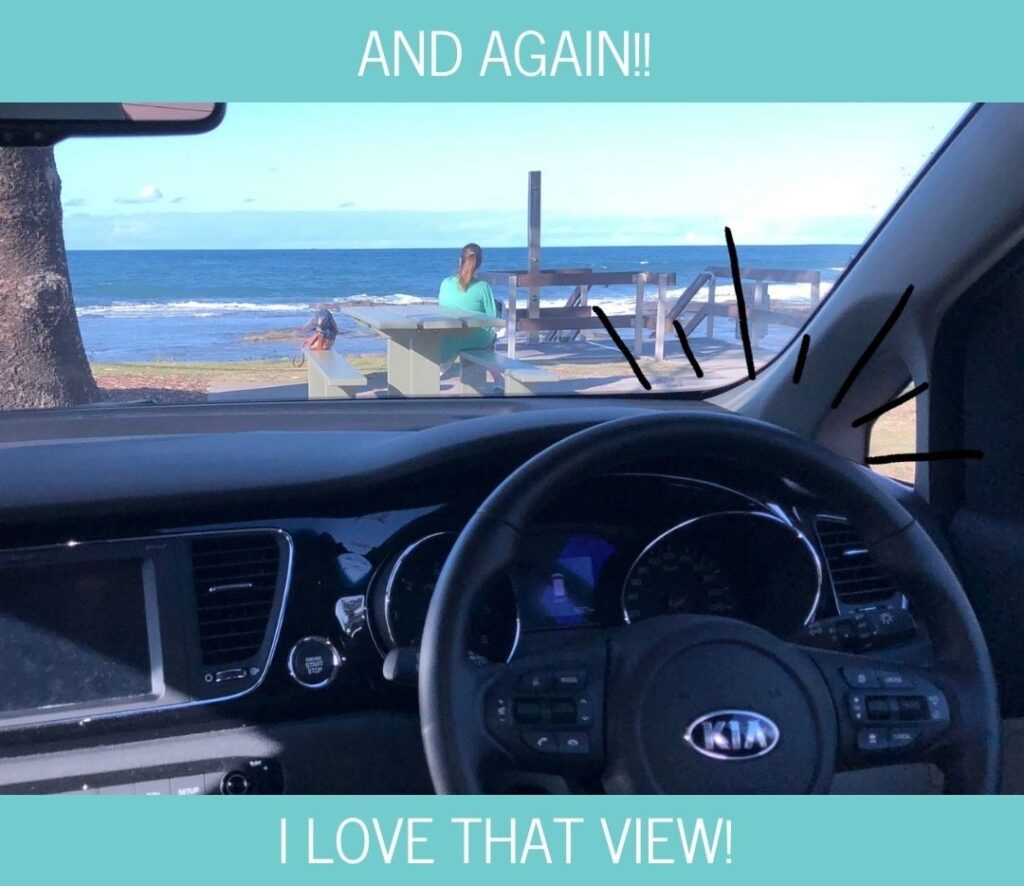 I find the Kia Carnival easy to park, visibility is good and the turning circle is small for a large car too.

The electric sliding rear doors are my FAVOURITE FEATURE of the Kia Carnival! My daughter LOVED them too so it was never difficult to get her into the car with… “do you want to press the door button?!” and it made it impossible for kids to bang the doors into cars either side of us. Although at kindy pick up every one of her friends did have to have a go at opening and shutting the doors!! 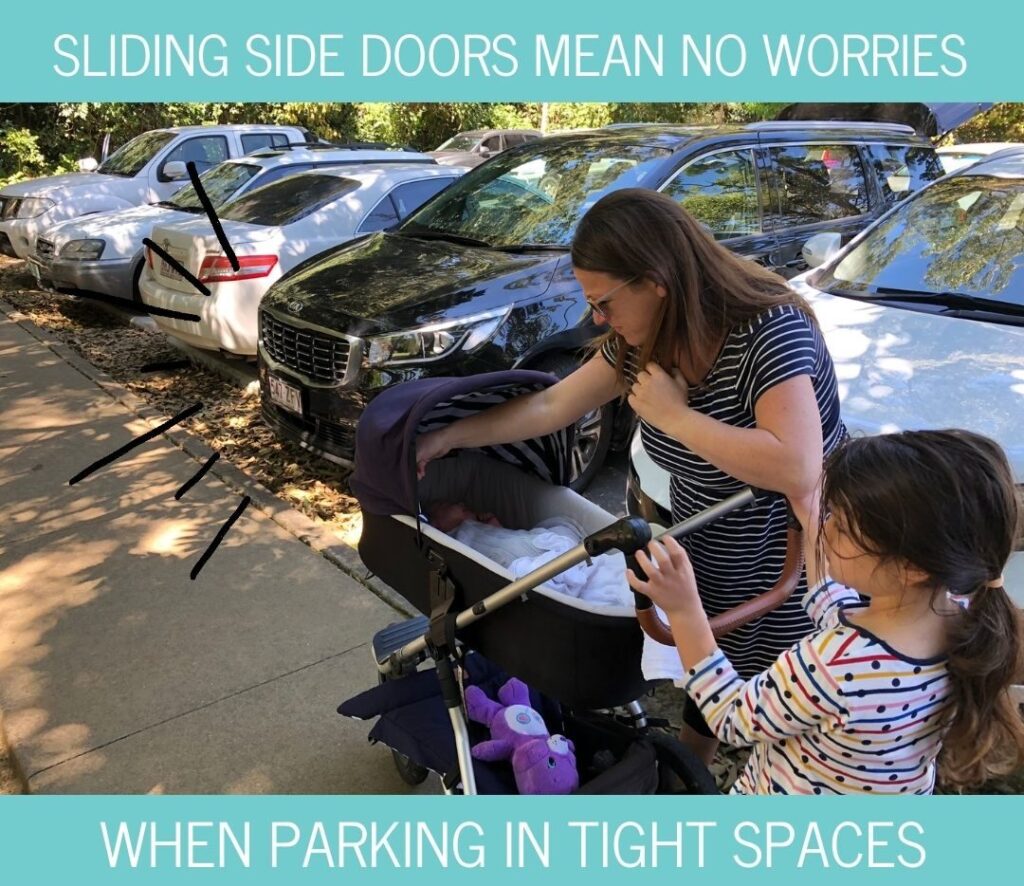 I LOVE the boot of the Kia Carnival too! I can walk up to the boot with my arms full of baby and STUFF and the boot will automatically open, allowing me to dump all the stuff and then pop Bub in her seat!

It is great for families too because when I'm using all eight seats it will still easily hold the base of my pram standing up in one side of the boot and the bassinet and extra stuff next to it thanks to the huge space revealed when you set up the third-row seats. 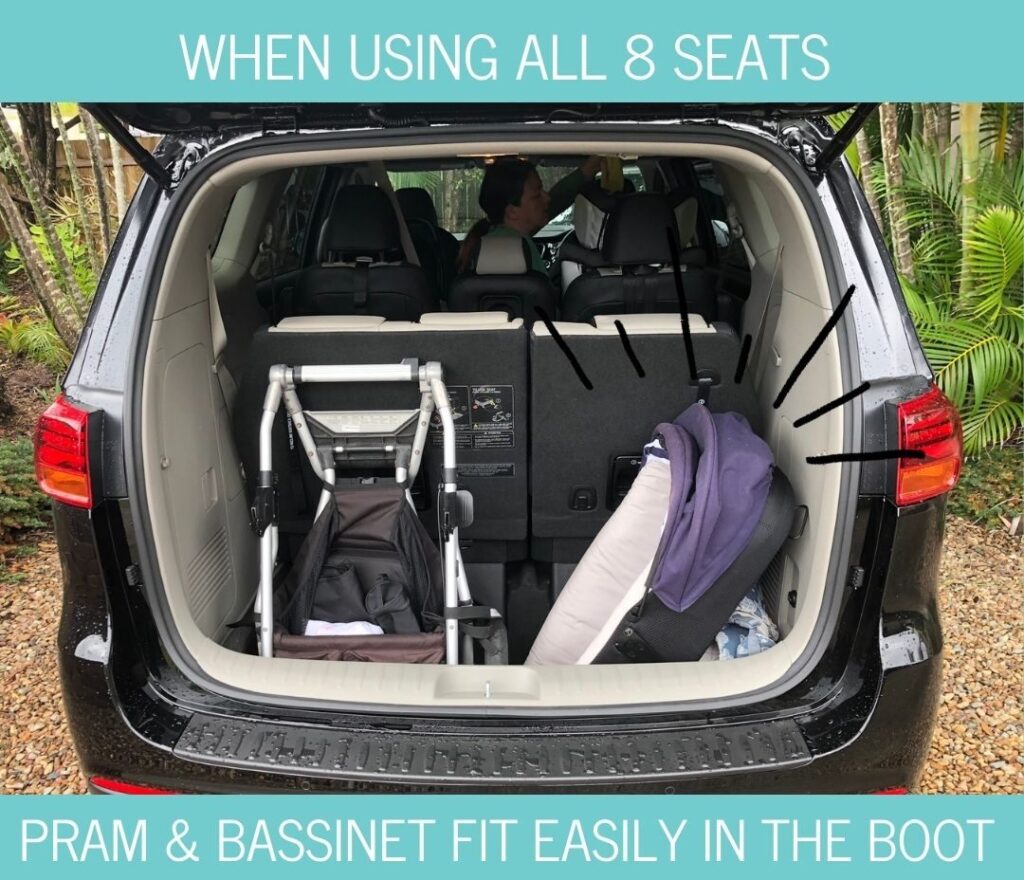 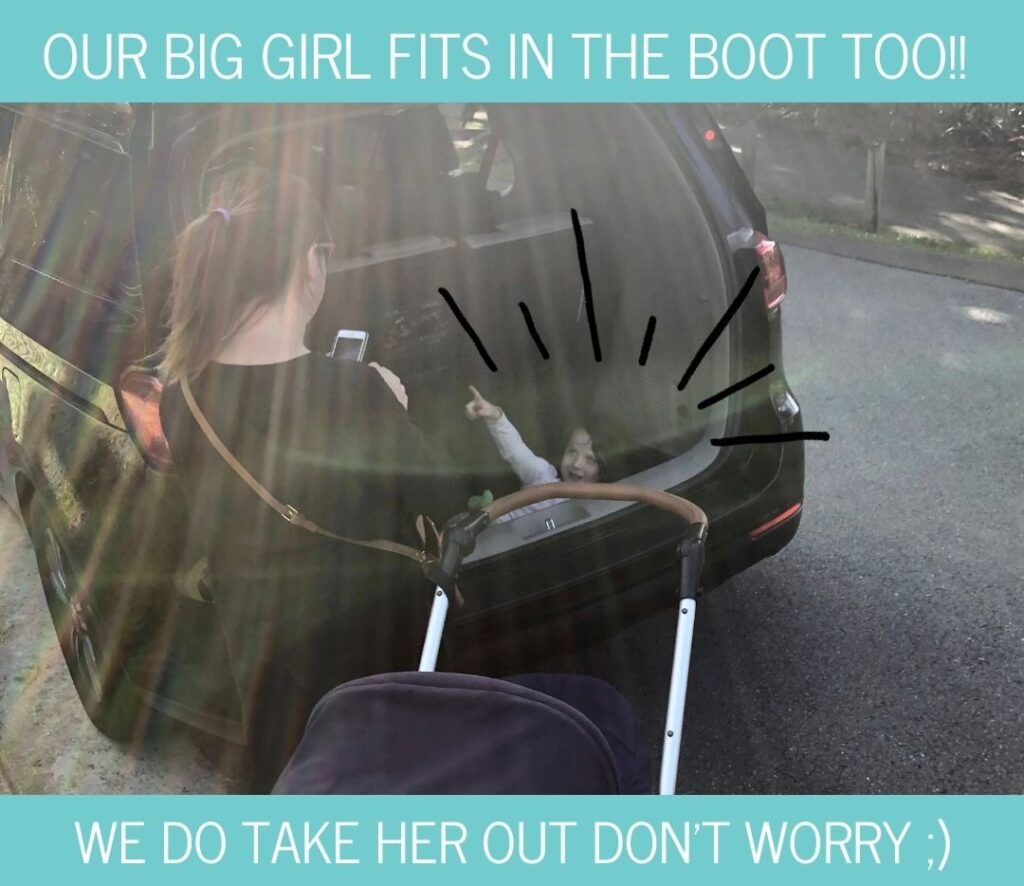 …or everything we need for a day out with a four-year-old and their newborn sister! 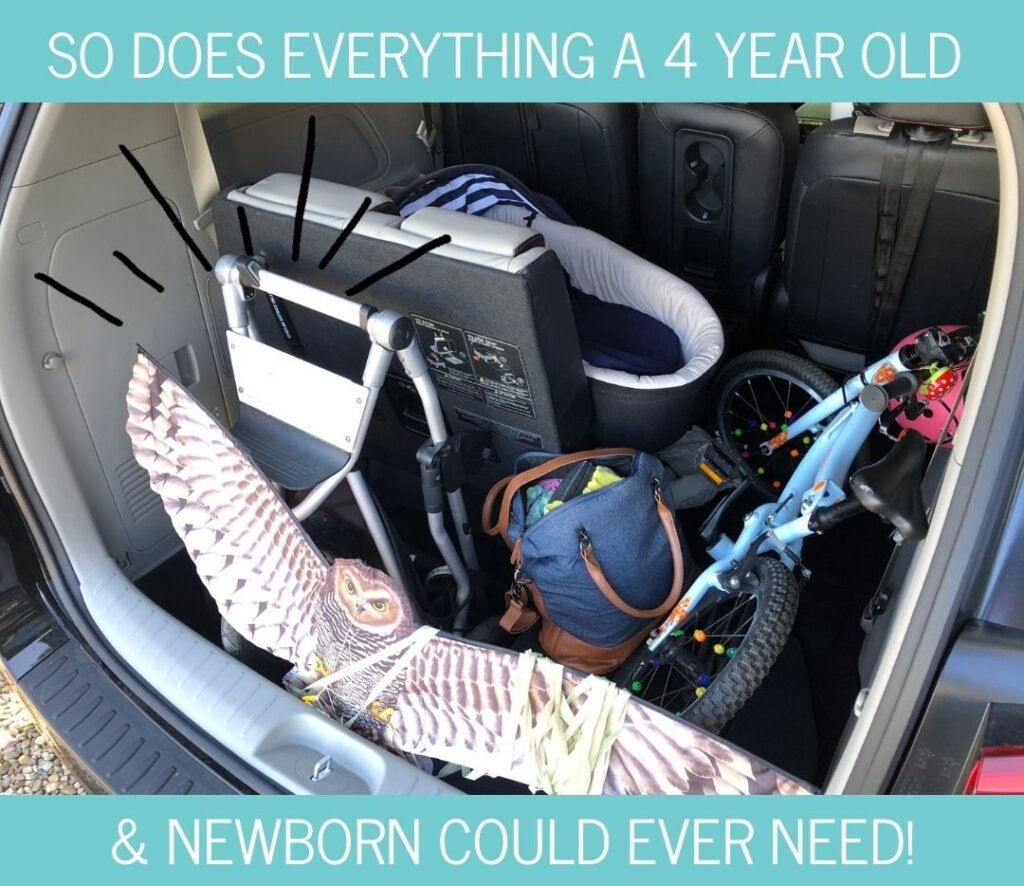 The boot of the Kia Carnival is low down, which allowed my eldest daughter to reach into and help get things in and out. 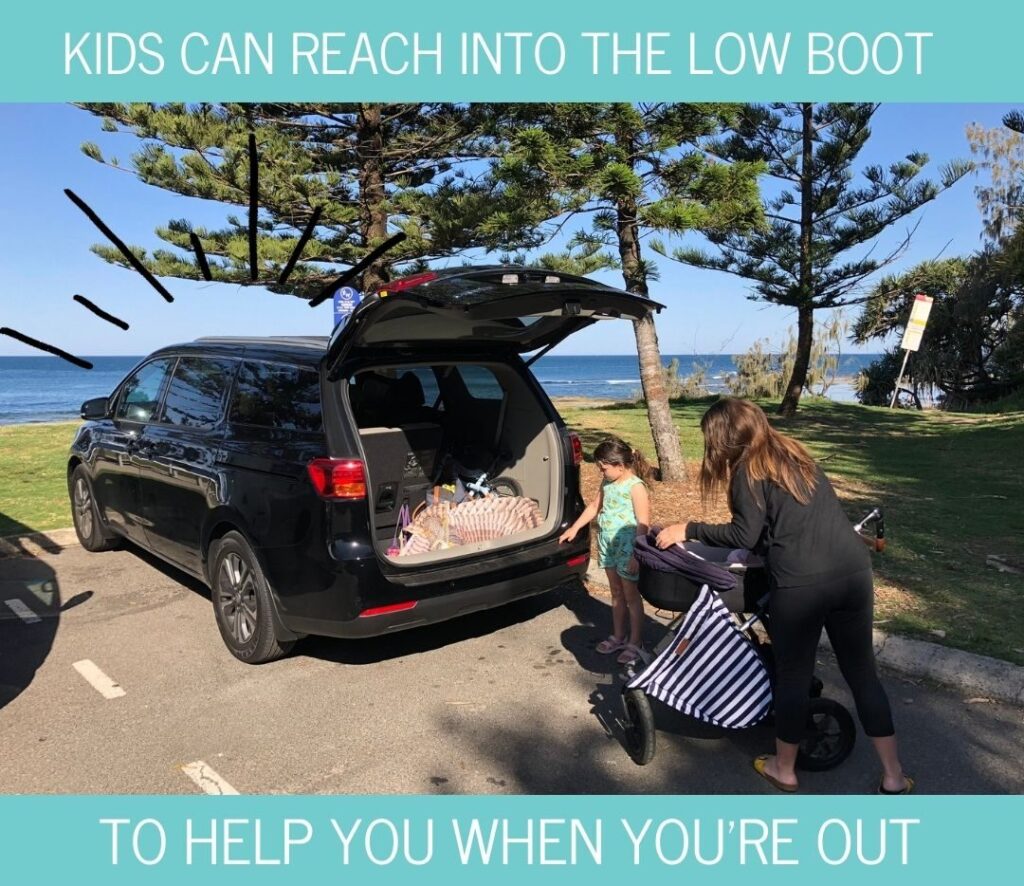 No hump in the floor of the second row makes it easy for kids to walk through and get out either side depending on which side there is space and it's safe for them to exit. 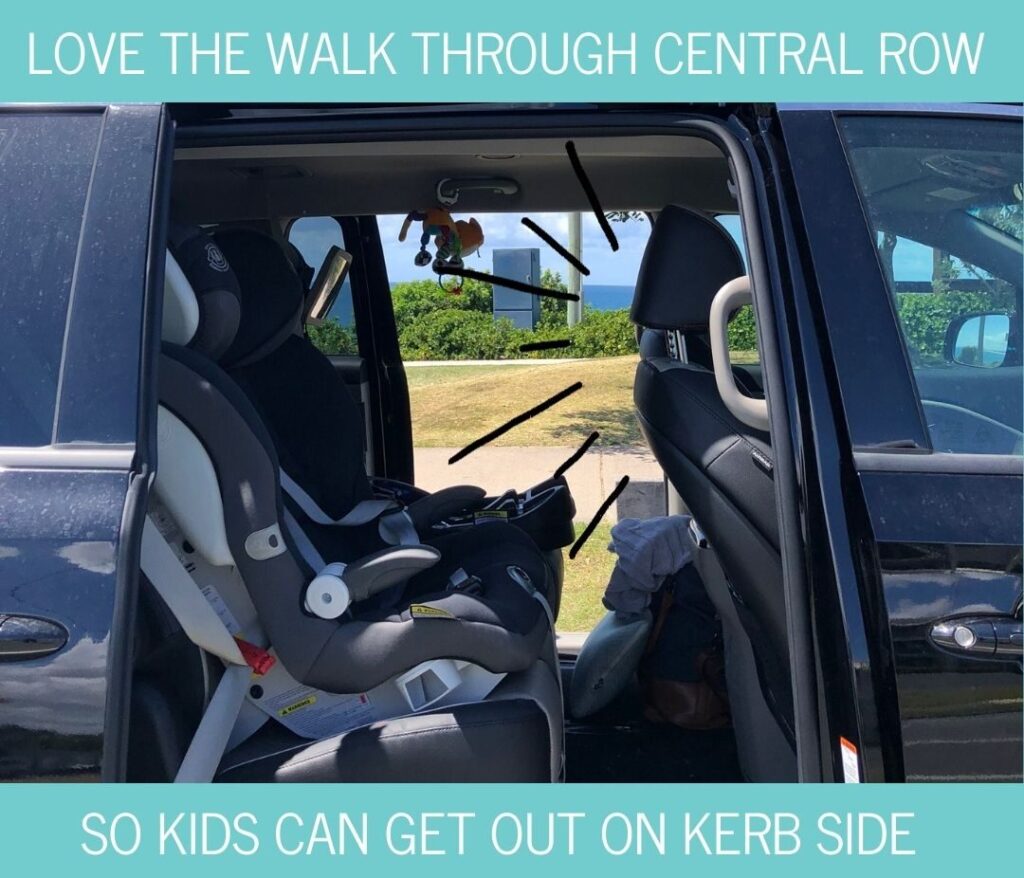 The storage in the side of the passenger footwell of the Kia Carnival was also perfect for carrying my flowers home from the hospital. 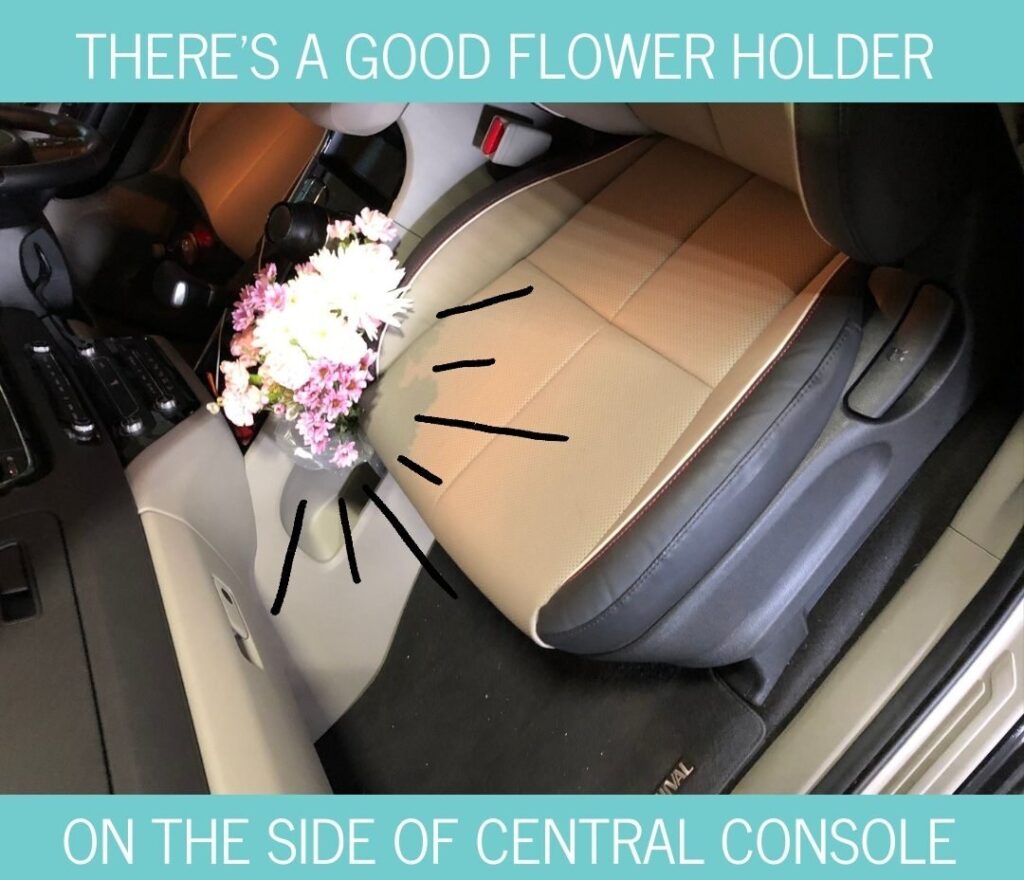 Having the Kia Carnival for so long made us really spoilt! We got used to the luxury of cabin and boot space, the ease of use and those magical rear doors!

We decided that if we ever buy one we want it to be a high-spec one with the addition of rear window blinds as we really miss those on this model (and the heated and cooled front seats too)! 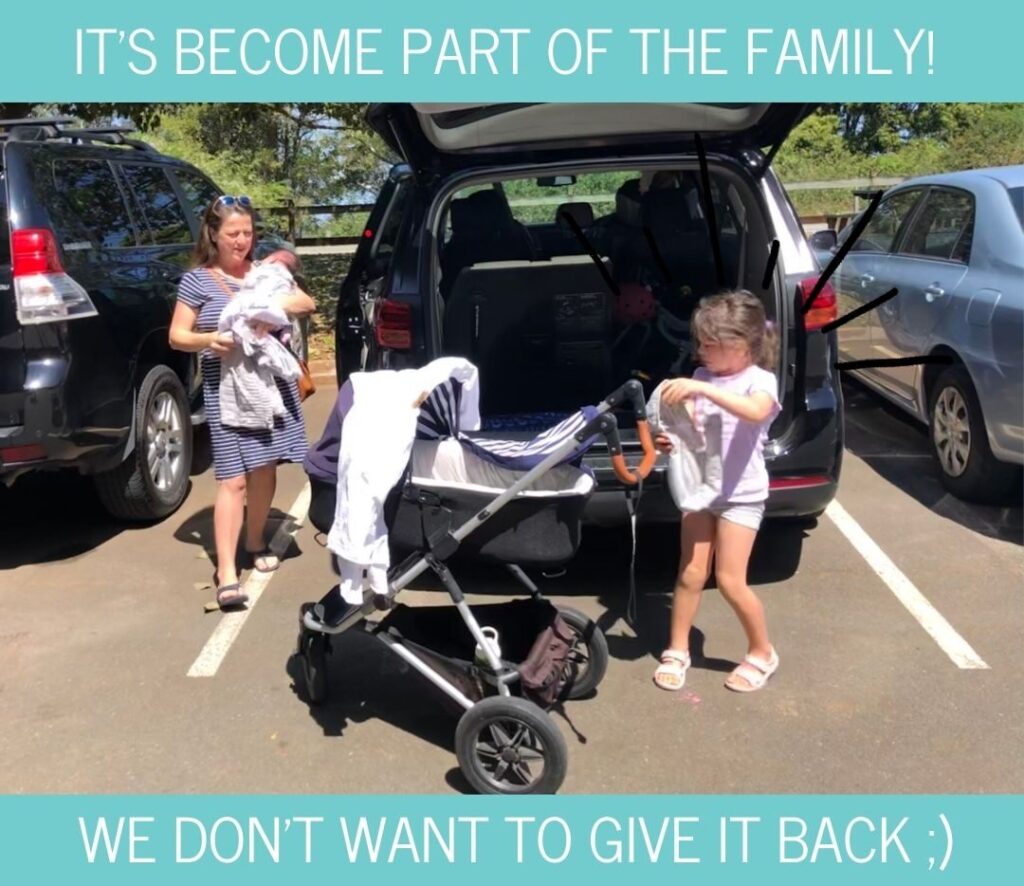 We were all very sad to say goodbye, our eldest daughter actually cried when we give it back, but at least she got to help give it the goodbye wash. 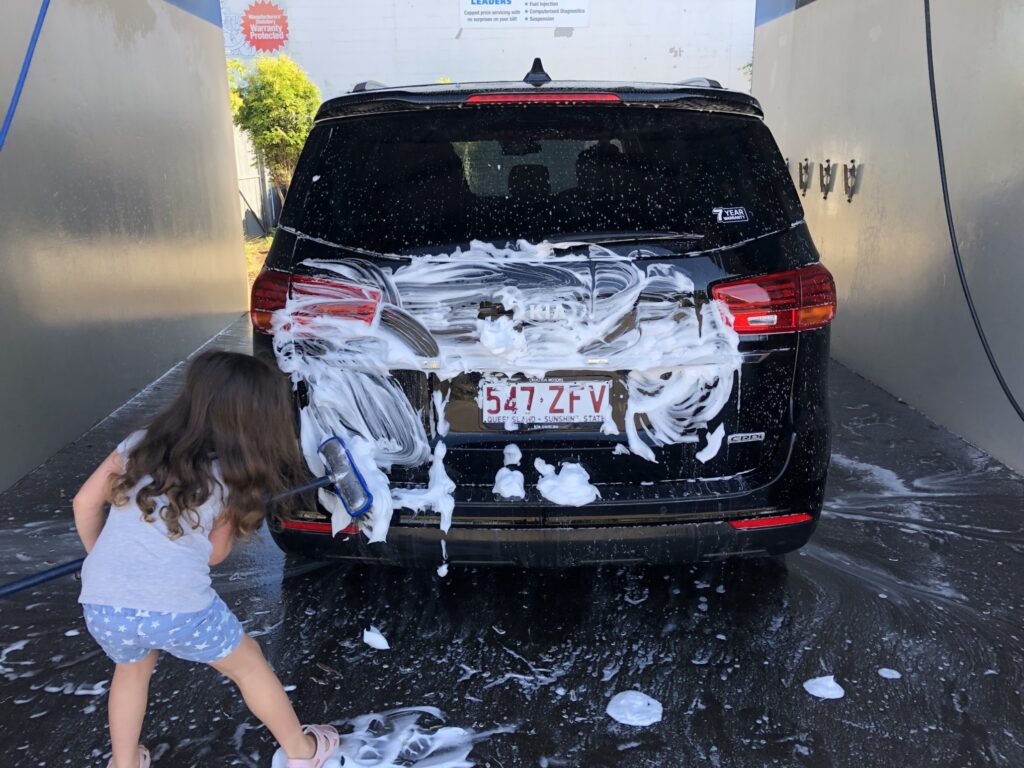 So many good memories from this car, which means I am SOO excited to test the all-new model Kia Carnival in 2021!! 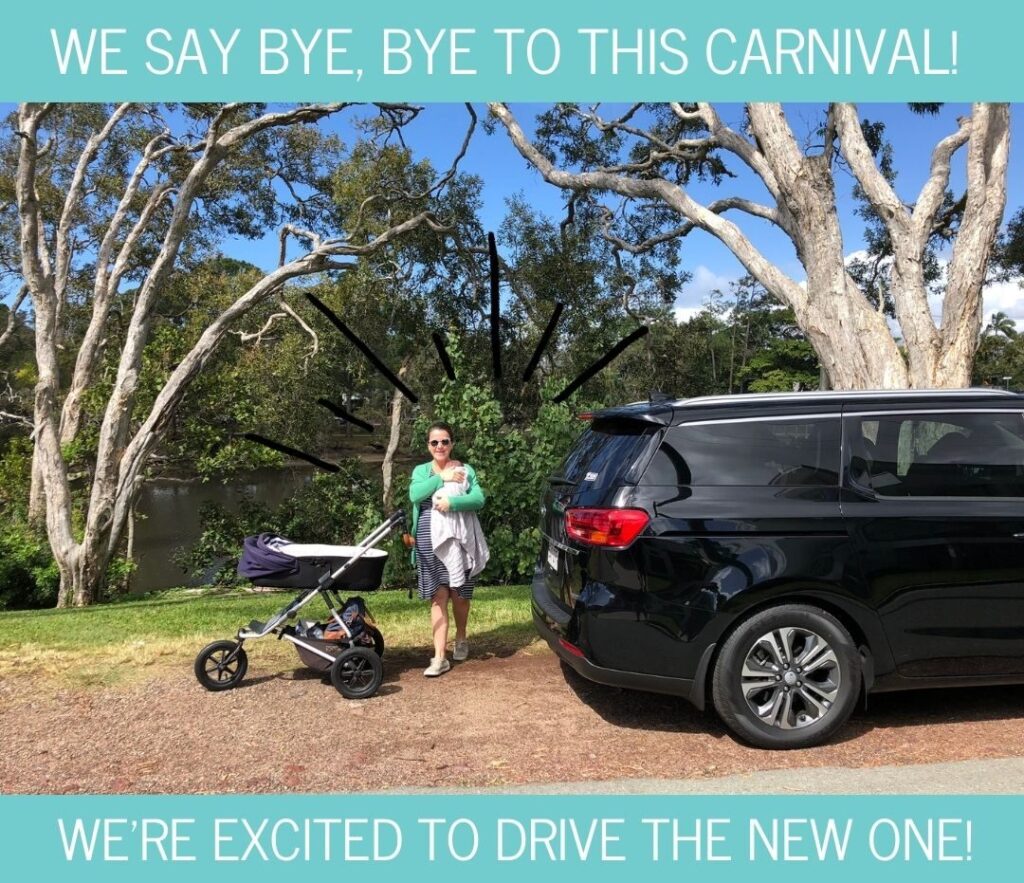 Here's a sneak peek of the new one: 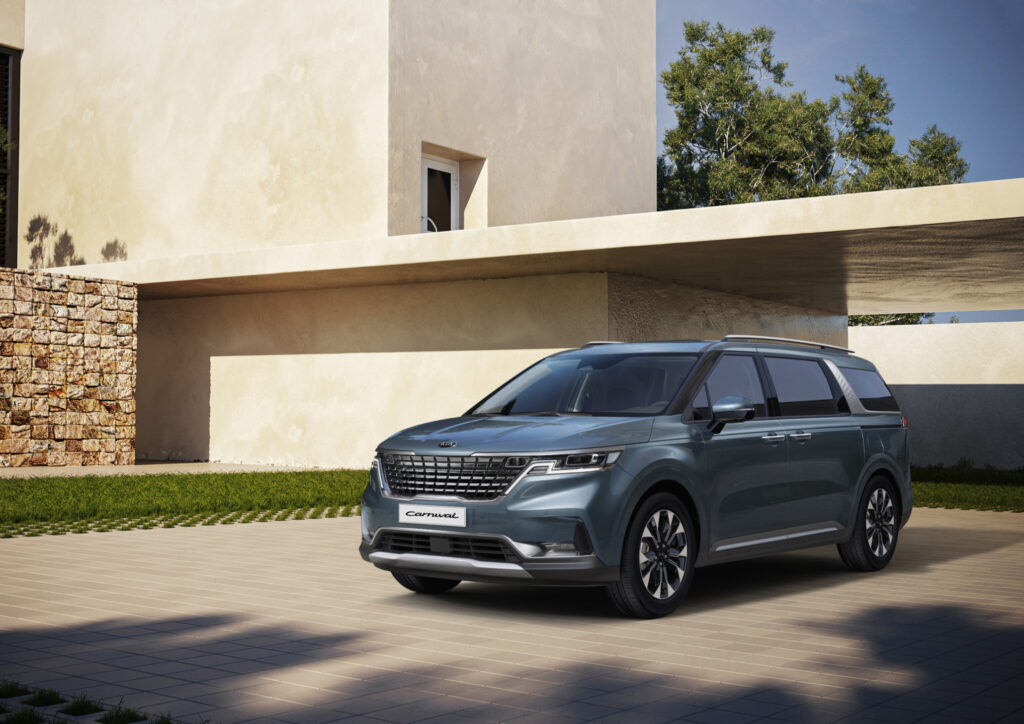 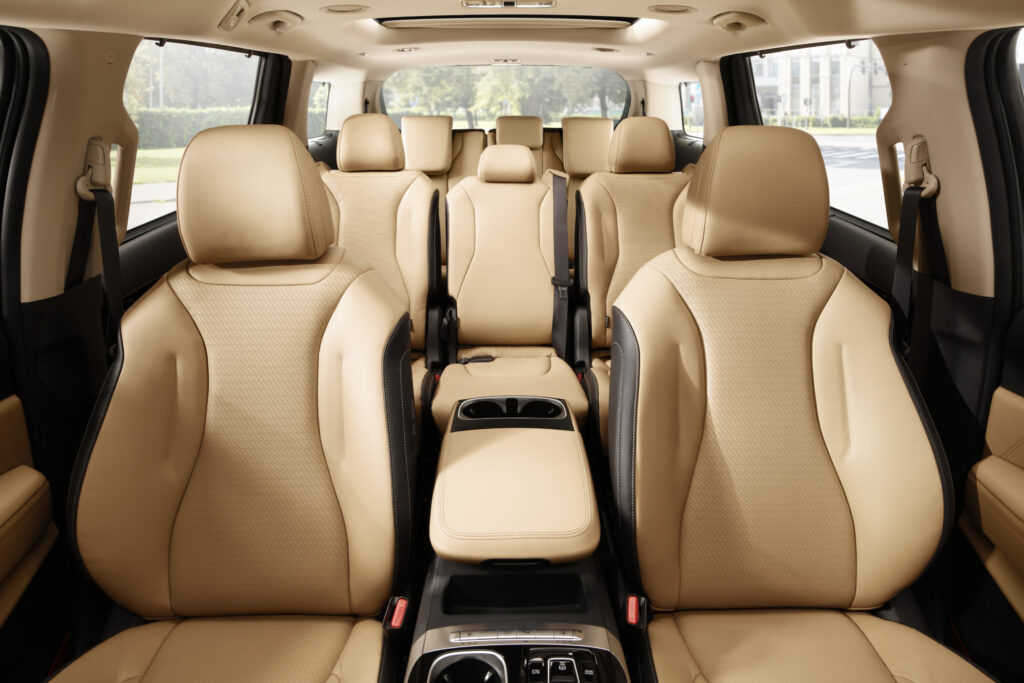 Five big child seats fit in the Volkswagen Multivan, with so much boot space for any strollers, surfboards and bikes! Read More

The Kia Carnival is a practical eight-seater that will adapt with your growing family. Four big child seats fit nicely and there was ample legroom in all three rows. The boot is a strange shape but holds the same amount as in the Infiniti QX80, two more bags than the Nissan Pathfinder and three more than the Mazda CX-9 when using all eight seats. Read More