Kia’s new Sorento slipped into the country during COVID-19 amidst very little fanfare. And more’s the pity. Because this is a seven-seater family SUV to get excited about. Guest contributor Vani Naidoo whose children are now beyond child seat age got behind the wheel of the range-topping GT-line for three months and loved, loved, loved it! 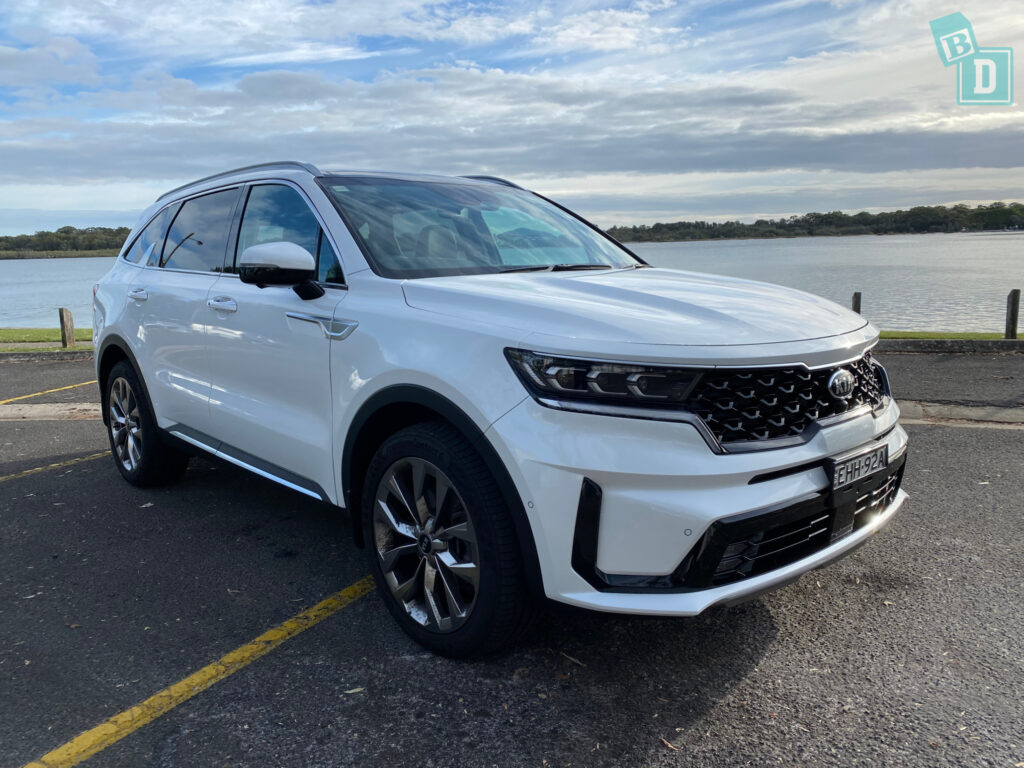 Kia announces its intent with this Sorento with a truly ‘wow’ exterior. It’s not often that a large SUV has the looks to hold the attention but this seven-seater is ripped, in peak condition, with chiselled, angular features, sharp creases and a rather confident stance. 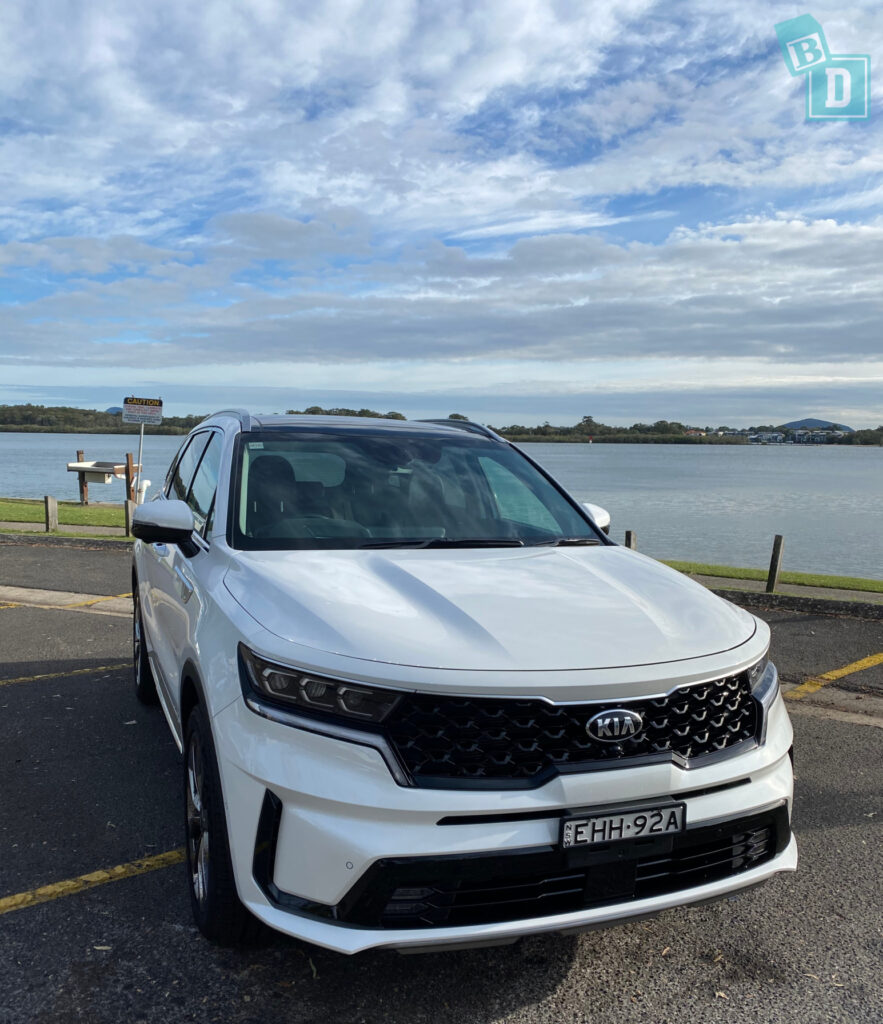 Ok, it’s just a car, I know, but take a look at it – an integrated ‘tiger nose' grille that extends into the headlights with separate daytime running lights sharpening the flavour is just the beginning of the love affair. The definition is carried through to the rear making the Sorento good to look at from any direction.

Even the teenager, who seems to be embarrassed by my mere existence these days, was happy to jump into the Sorento … and offer a lift to her friends. My mention of her eagerness only gets half an eyeroll – definitely counting that as a win! 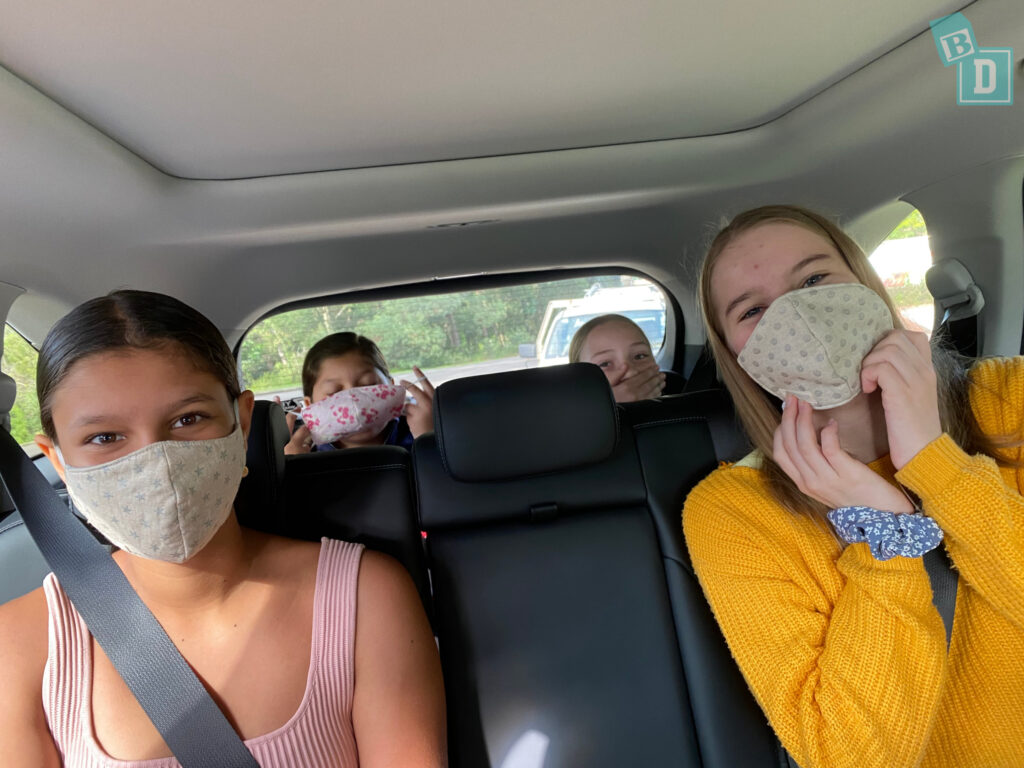 On the inside, too, this SUV is quick to make a bold statement. It looks and feels spacious and luxurious with the GT-line featuring comfortable Nappa leather seats, textured silver accents, mood lighting and a cabin overflowing with conveniences. The fit and finish is hard to fault while the placement of dials and buttons and storage options is well thought out.

A couple of days behind the wheel is enough to suggest that the Sorento is about more than good looks. It is supremely comfortable with a good driving position and pleasing all-round visibility.  Space is always a consideration in a family steed, especially with kids who seem to be growing a couple of inches every few months. There are school bags, musical instruments and sporting equipment to cart around as well as their friends who need a lift and of course the ever-growing weekly shop. 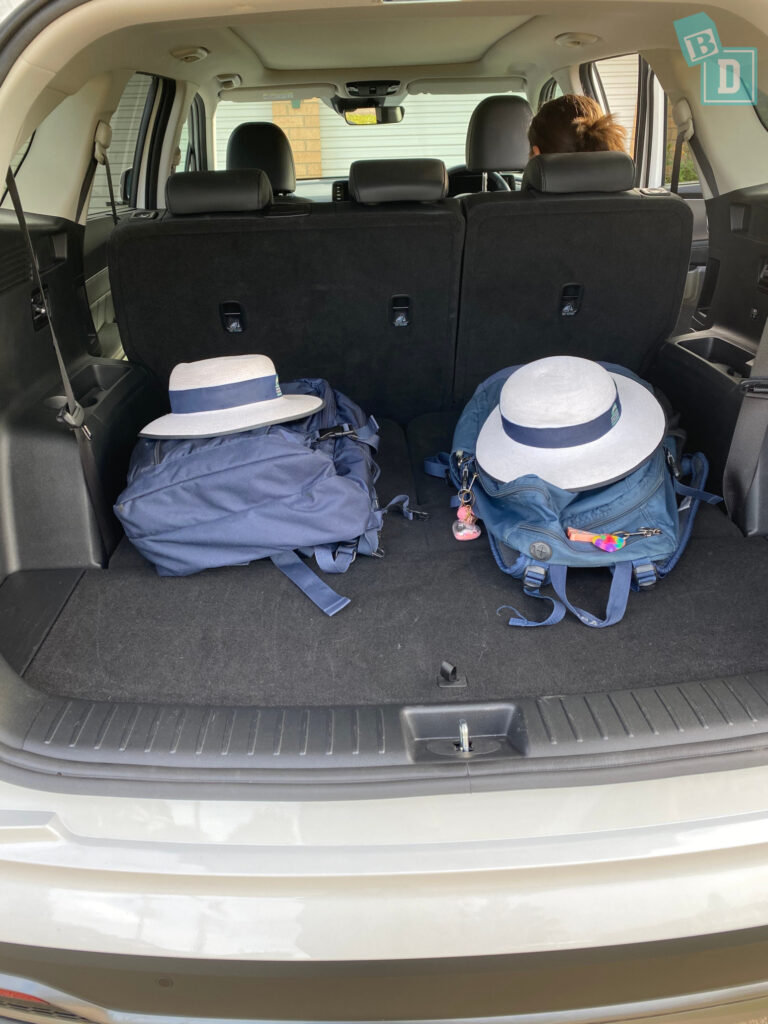 This seven-seater copes well enough with those demands thanks much in part to the practicality and versatility of the second and third rows. The former is able to slide forward and aft to help with comfort levels and seats can recline too if needed. My girls report that lodgings back there are “better than really nice”. High praise indeed. They liked what feels like a higher seating position, excellent viewing out the windows and panoramic glass sunroof and blinds for when the sun was particularly strong.

Of course, the third row is better suited to kids than adults – the smaller windows can feel a bit wanting on longer trips – but anyone stashed back there is hardly struggling. The third row boasts cup holders, directional air vents and a couple of USB ports (two of eight dotted around the cabin). We have a number of occasions to test out the third row this month, ferrying friends to soccer practice and the beach and grandparents to the movies and it’s definitely been more boon than bust. 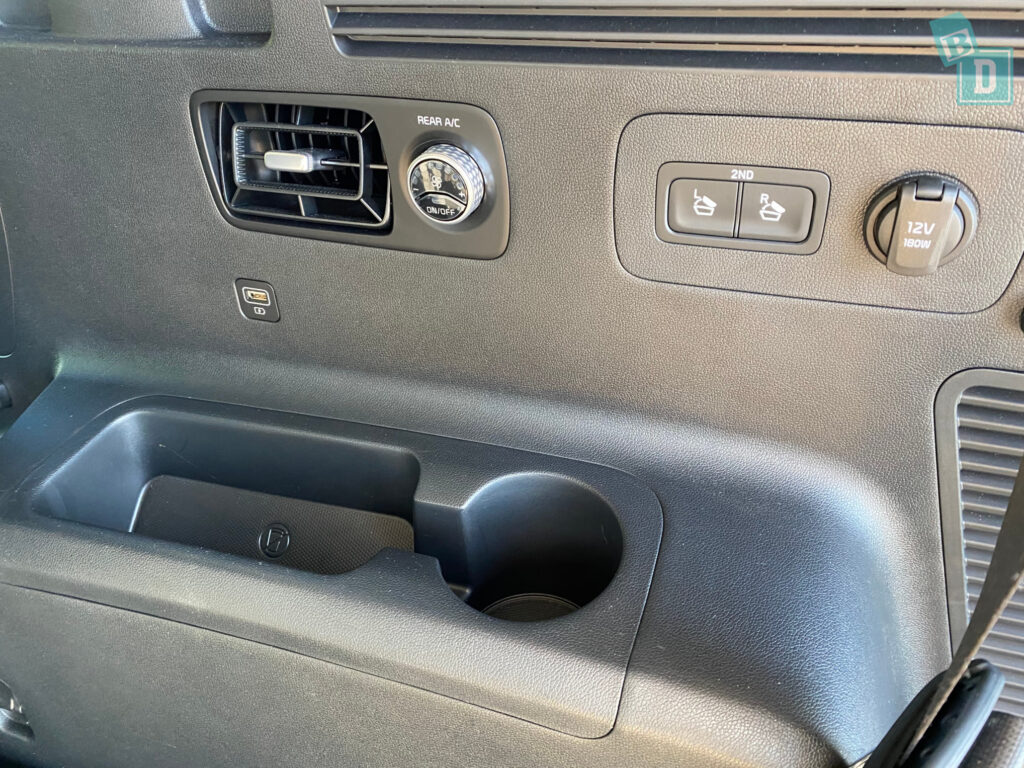 I’m reminded that boot space with all three rows in use can be quite tight when we try to shove in a couple of chairs, swim bags and a soft esky for the run down to the beach – it may only be five minutes away but we still need stuff. Suddenly the roomy boot available with just five occupants on board is now one quarter the size and it takes some right real shoving to get everything in. 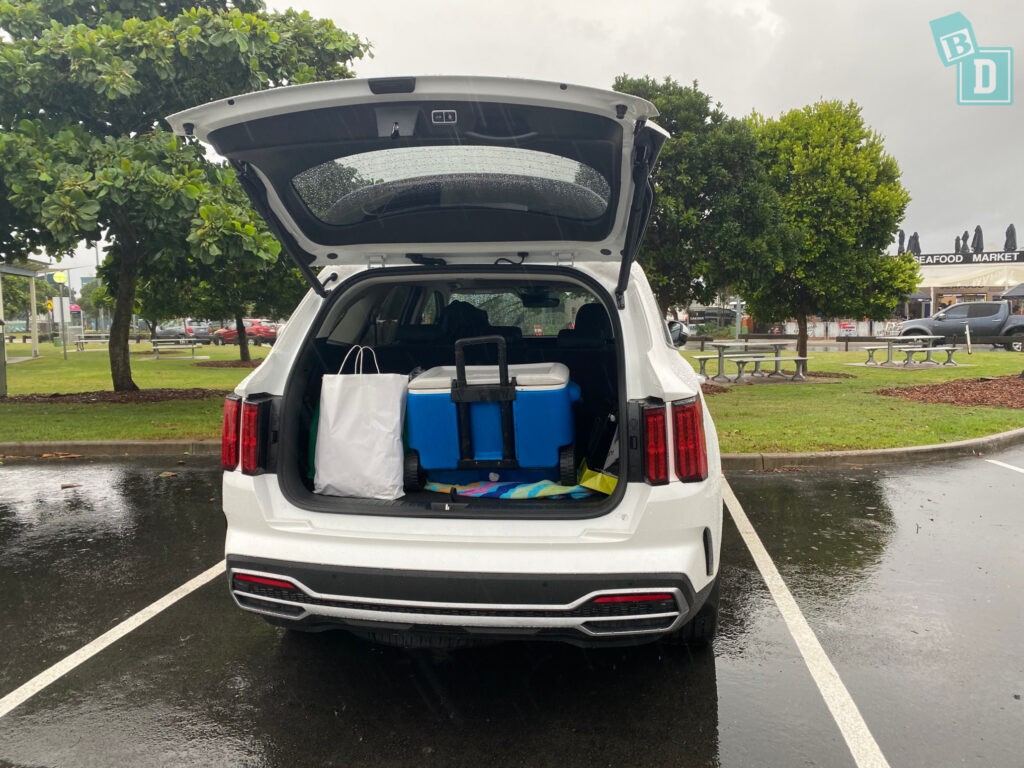 Oh, there is a nifty storage compartment under the boot floor that is great for wet swimmers and hiding the Easter chocolate on the way home from the shops. 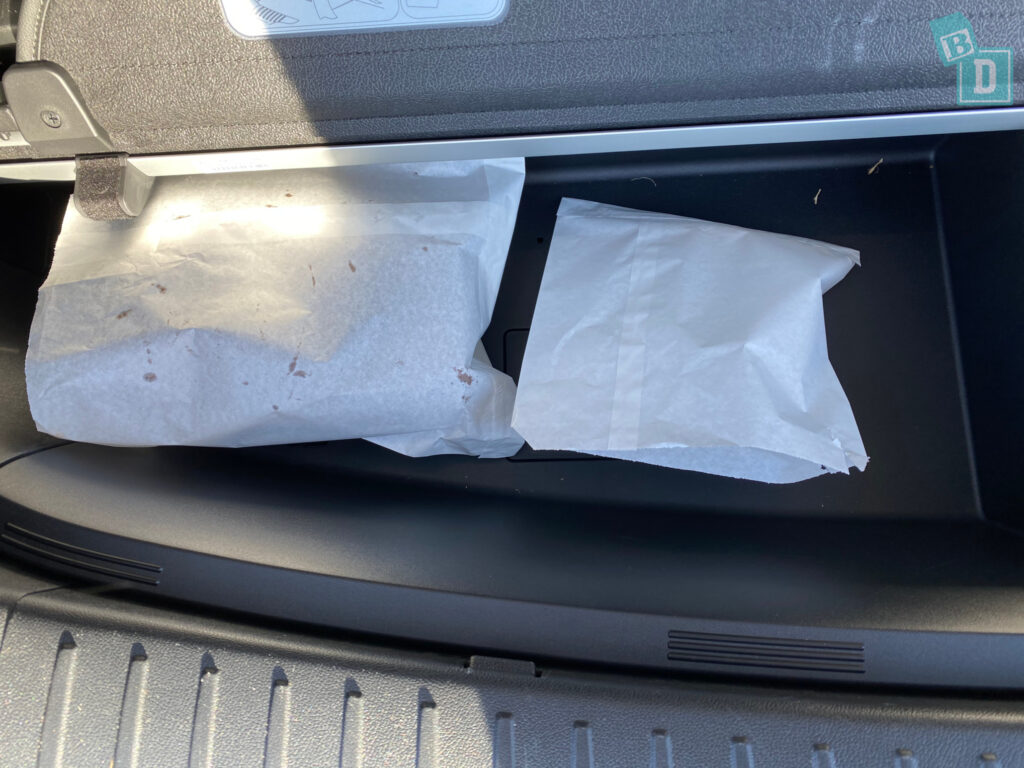 Practicality and ease of use have always been the Sorento’s strengths and this model doesn’t fall shy either. This is an SUV made for families, busy or sedentary, and thought has gone into making it a trusted ally. There are USB points for everyone, which will stop all manner of arguments, 12V outlets in each row and a wireless phone charging pad upfront. There are cup holders galore too (12 in total), but we especially like that the outboard seats in the second row have theirs mounted to the door. 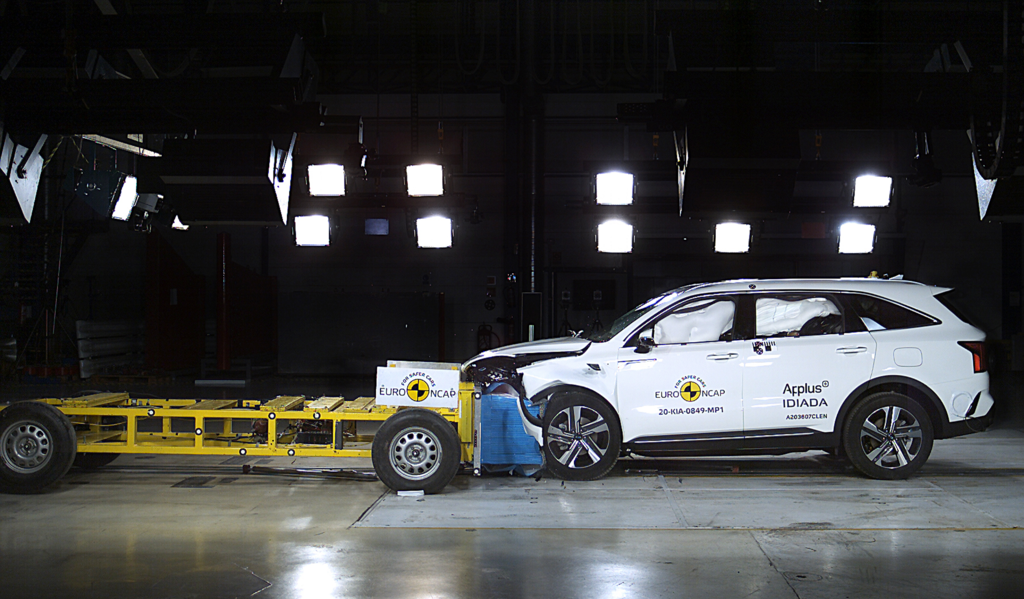 The Sorento GT-Line is also super big on safety with an inclusions list that numbers all those elements you would expect in a car with a $60,000+ price tag and many usually found in more expensive offerings.

Our favourite is the blind spot view monitor which shows an image in the digital dashboard (either the speedometer or rev counter) of what’s in your blind spot when you indicate. Yes, it’s a great party trick – as the neighbourhood kids lining up to take a peek would attest – but it’s also extremely useful in a practical sense too giving you a much wider view than just the wing mirrors.

Certainly, things like blind-spot collision avoidance in the Sorento, as well as rear cross-traffic alert which is gold in shopping centre carparks, autonomous emergency braking that can detect oncoming traffic when you are turning, smart cruise control with lane-follow assist and a multi-collision brake system that can help mitigate the impact of secondary collisions after the airbags have been deployed are impressive and you can see their everyday use.

And who doesn’t love a hands-free powered tailgate which allows you to open the boot with groceries and kids in your arms – a lifesaver in the rain as we found out. 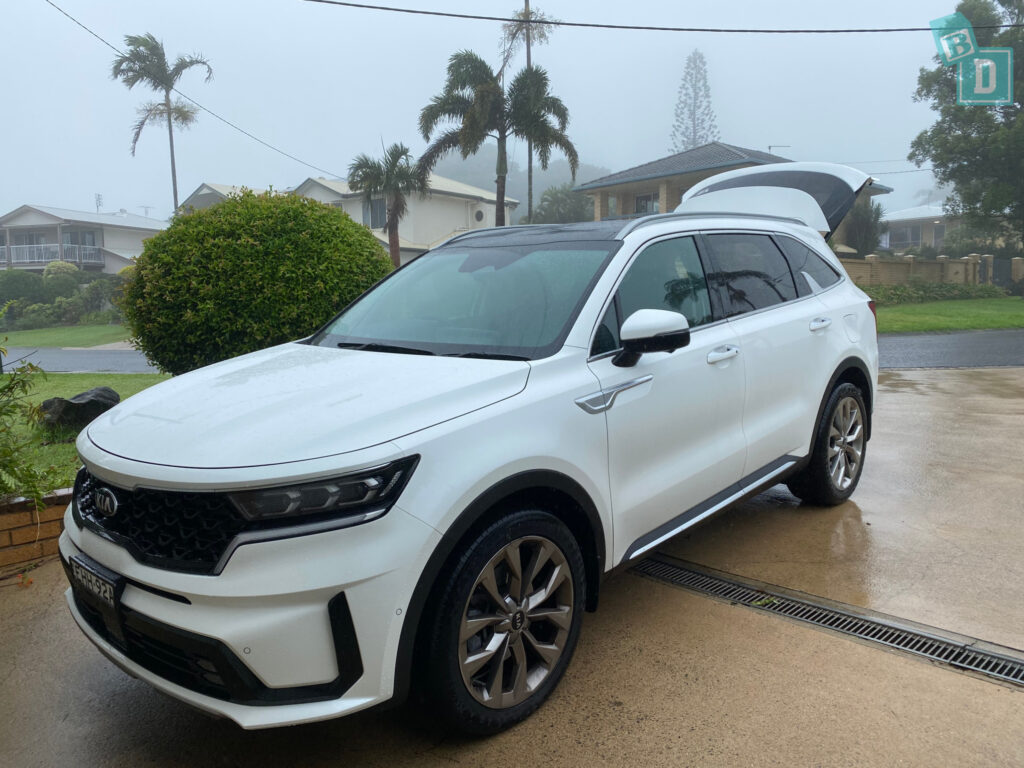 There are others, though, like the Remote Start Park Assist that I was convinced we would never use. It allows the car to be driven slowly backwards and forwards through the key fob. It is meant to help you access doors and the boot when parking is tight. I laughed at the idea, scoffed really … until karma bit me in the bottom and I needed to use said feature in the Coles car park. Hemmed in by a dual-cab ute and Toyota Landcruiser – both driven by people, it seems, who were not going to be restrained by parking lines, there I stood with green bags in hand and a quandary afoot. I thought about climbing in through the boot, and almost did, before giving the key fob a go. I was nervous as hell though, edging the Sorento ever so slowly from its confines and rejoiced at the success.

There are four ISOFIX mounts – two each in the second and third rows – and five top tether anchorages if you are carrying littlies. There are no full curtain airbags in the third row though – one of the Sorento’s rare oversights – so you may have to think about who gets seated back there.

Our GT-Line is powered by Kia’s 2.2-litre turbo-diesel four which delivers 148kW and 440Nm available low down in the range. It is paired with a dual-clutch transmission and all-wheel drive for added versatility. 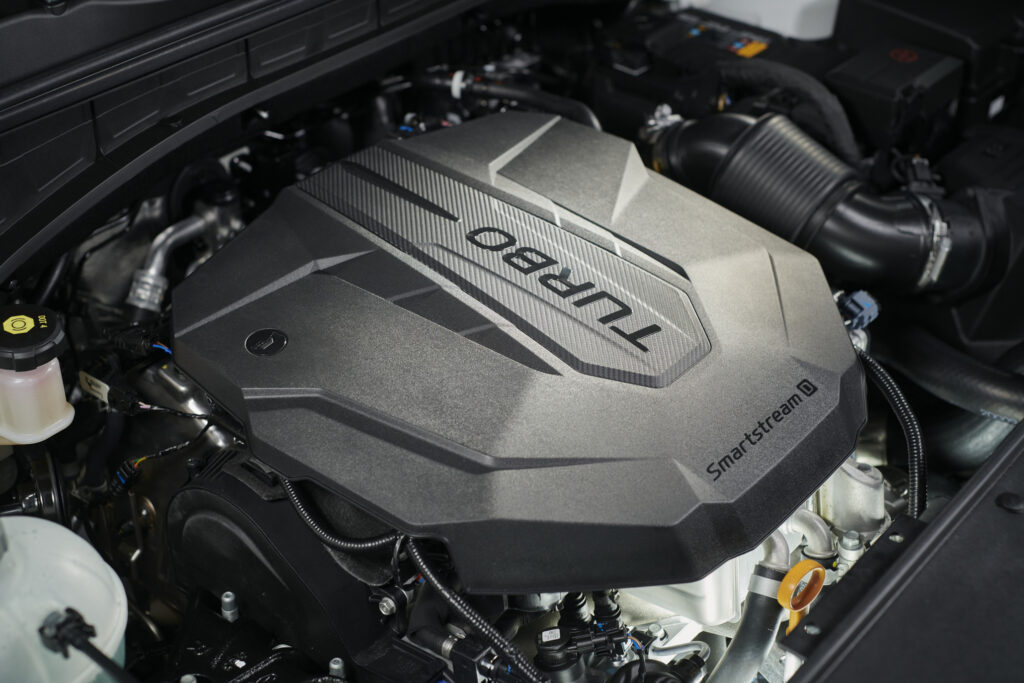 Some people don’t like the clatter of a diesel but I love it! It reminds me of a childhood around diesel motors – a sound that almost instantly takes me back to carefree days on African soil. In the Sorento that nostalgia is available on start-up but eases almost immediately.

Kia’s engineering team spent a number of months on all manner of Australian roads tuning this SUV to our unique conditions and that hard work is celebrated in an effortless drive. The Sorento is supremely poised, unflustered by road quality and providing a quiet, seamless ride. It feels connected to the road with enough feedback from the steering to keep you honest and has the sort of finesse needed to move a big car around small spaces.

There is very little roll around corners even when shoved a bit harder than needed, it is proficient at speed and adjusts easily to the will of the driver. Now, if only some of its good manners could rub off on the kids in the back.

This is not an SUV to take on a serious bush adventure but it will happily handle unsealed roads and gravel paths not too far off the beaten track. It is on our return from one such track from a much-loved camping spot that we hear the Sorento has won another prestigious car of the year award.

Suspicious by nature, I am usually happy to take accolades with a handful of salt. Yet, in the three months we have had the Kia Sorento under test, it has proven an able competitor. A curt perusal of the cabin offers further evidence of its appeal. In addition to the space, safety, versatility and drive performance, this SUV also has its fair share of top-notch tech.

The Sorento’s previous infotainment system was good but this one is so much better. The 10.25 touch screen has excellent resolution and the system is well organised and super easy to navigate, graphics are great – in quality and design – and the split-screen functionality adds to the usability. It also blends seamlessly with the 12.3-inch digital instrument cluster which echoes the same crisp high-level quality. 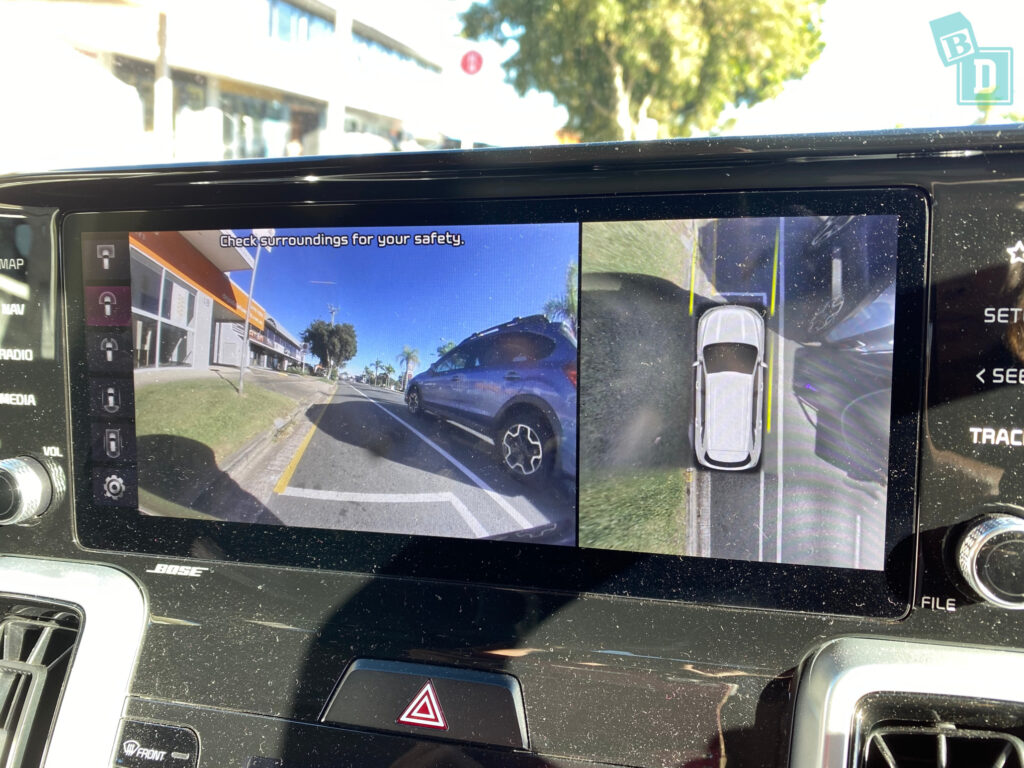 Bluetooth connectivity is easy and reliable, and the system can support more than one phone at a time which is useful. We loved the passenger row speaker function which allows the driver to project your voice into the second and third rows. If you time it just right. you can give the kids engrossed in their technology a real fright – heaps of fun.

We also loved the Bose 12-speaker sound system – the quality seems even better when streaming your own music rather than broadcasting a radio station – and is an awesome weapon in the battle between my cracker 90s tunes and yet another sad Olivia Rodrigo stalker song.

There is so much to like about the new Kia Sorento – its looks, its value, its performance. It offers luxuries, technologies and considerations not generally seen at this price point. This iteration has transformed this family SUV from a safe, solid performer into a real head turner 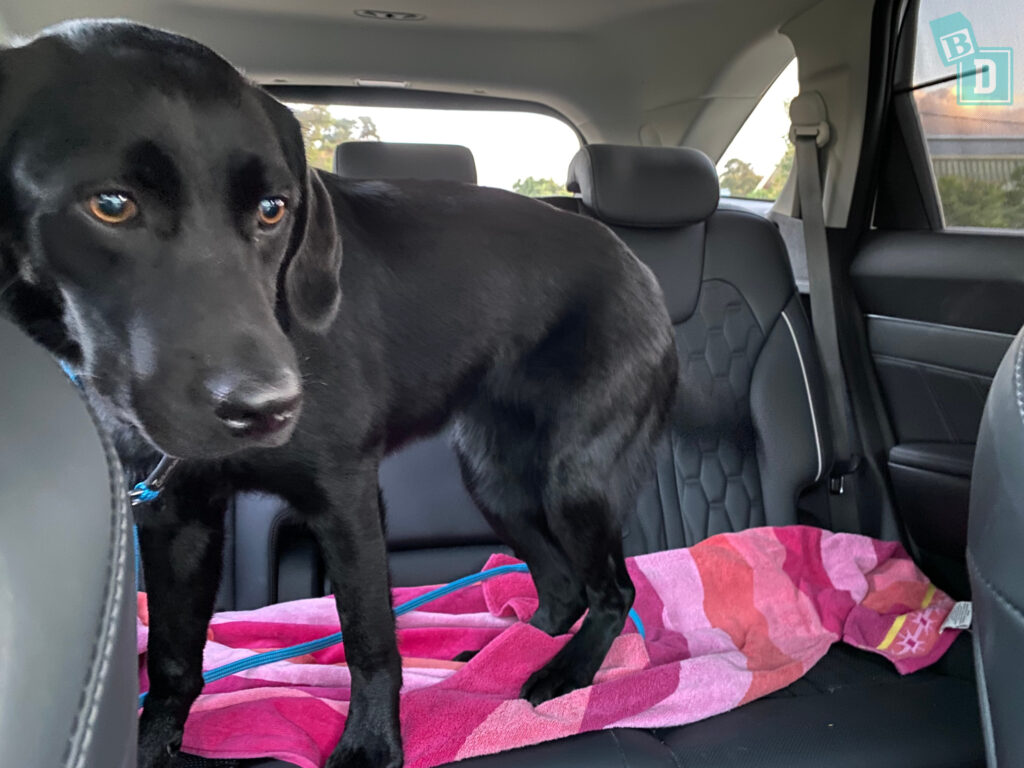 Did you like this review format for parents with kids beyond the child seat? Let us know in the comments below! If you have younger children with car seats and prams to consider, check out our Sorento Sport vs GT-Line review here.

The 2020 VW T-Cross Life will fit a double, tandem or single pram or stroller in the boot and two child seats in the rear seats Read More

The Toyota Landcruiser Prado is a big seven-seater 4WD, family SUV that I could get three child seats in. Boot space is great too when not using the third-row of seats. Read More