The BRAND NEW 2022 Mitsubishi Outlander is here and I get to have a sneaky drive of the seven-seater high-spec Exceed model and put it through our BabyDrive testing ready for its release! Let's take a look at how it gets on as a BabyDrive… 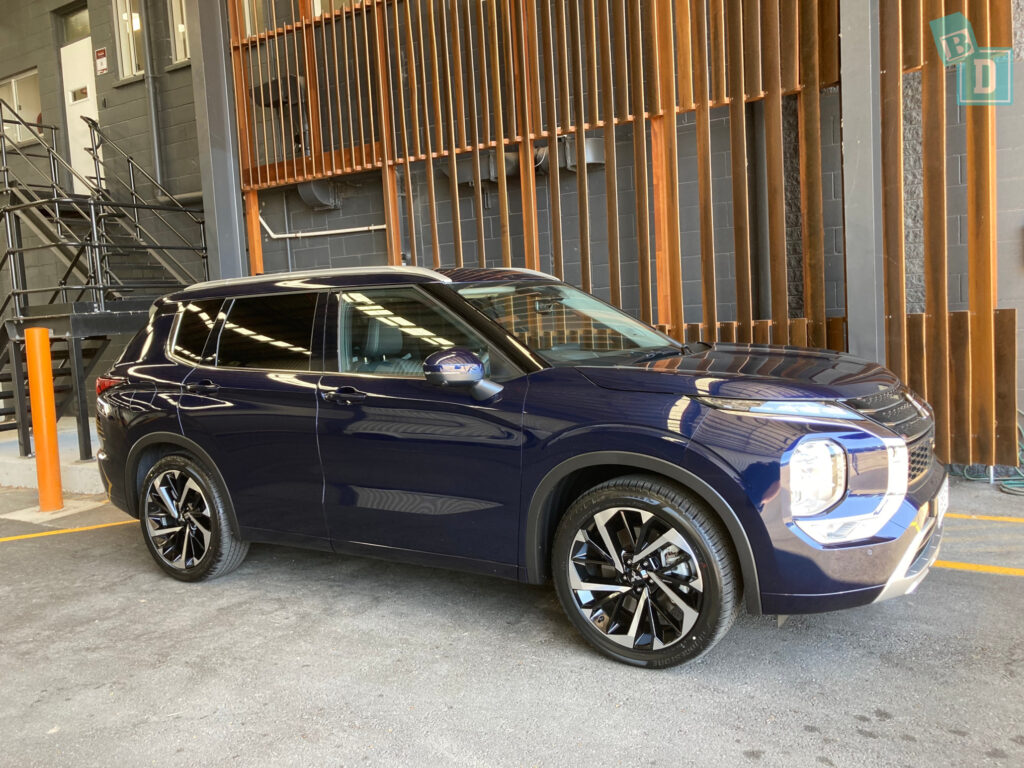 Firstly on the outside, it LOOKS GOOD! As far as seven-seater SUVs go, they have made the new 2022 Mitsubishi Outlander look pretty chiselled and rugged. 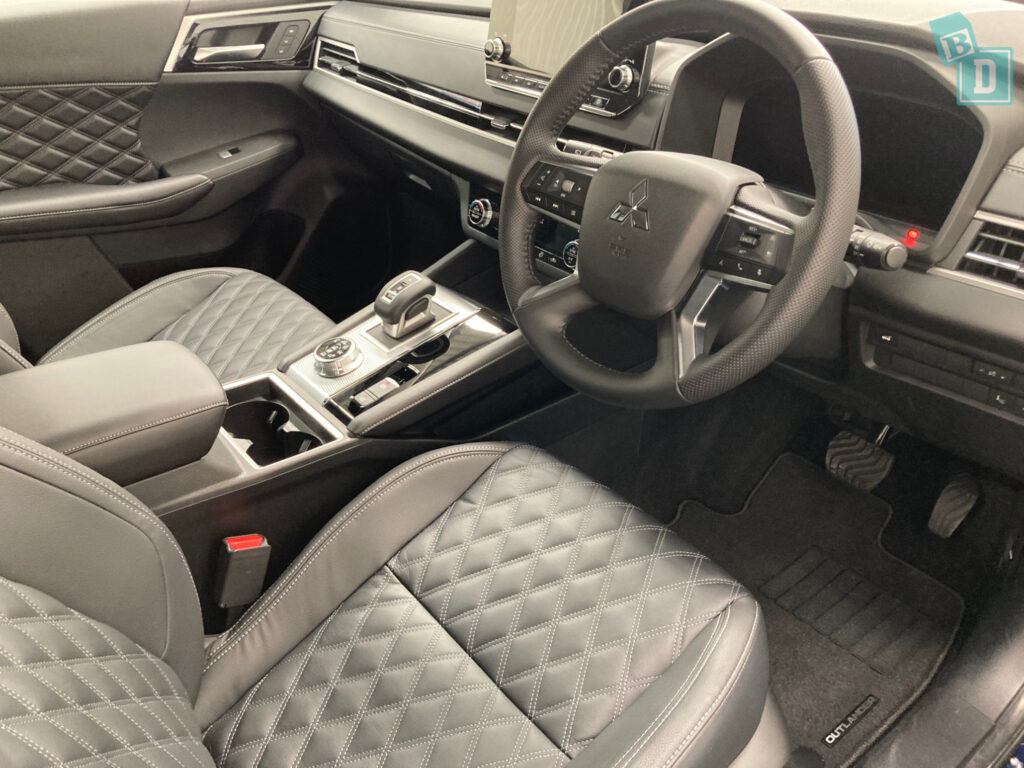 On the inside, it's much more modern and stylish too. This is the high-spec Exceed model so it has quilted leather seats and a large media screen too. It definitely feels like it more than competes with its rivals now. 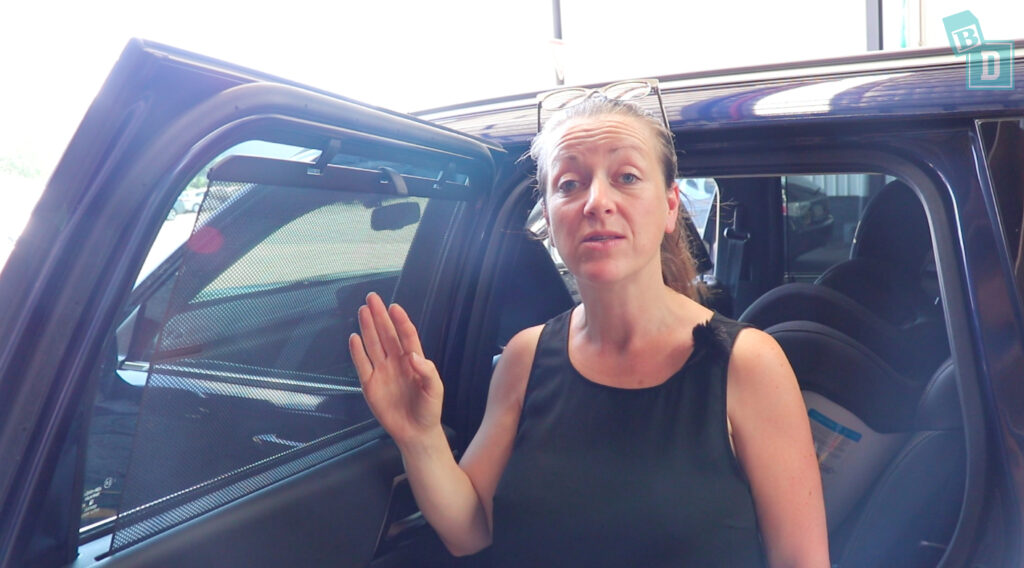 Also in this Exceed model are built-in window blinds in the rear doors, making it one of the few vehicles of this size I have tested that has them, other than the Skoda Kodiaq (technically in the next size up), especially in the five-seater models.

Also when it comes to family practicality in the back seats Mitsubishi has made the BEST change to the second-row seats by getting rid of the central seat buckle that used to stick right up in the air and prevented you from being able to instal a child seat in the central seat.

Now all the seatbelt buckles sit flush in the seat bases which is fantastic news for families and anyone wanting to sit in the central seat. 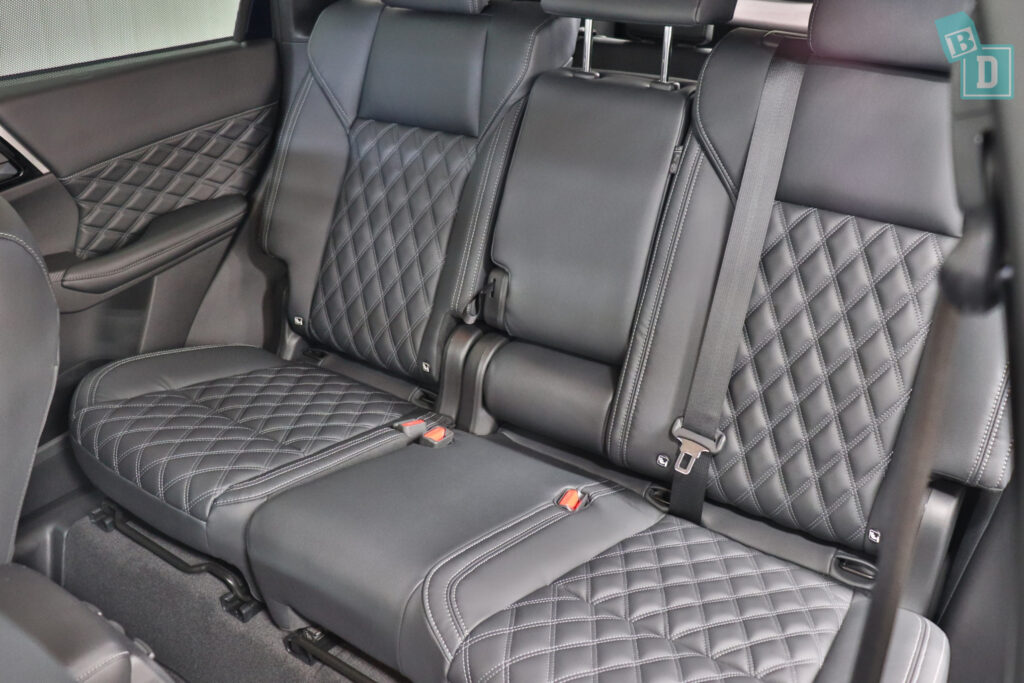 When it comes to installing child seats, the second-row seats have been made slightly wider, which meant we could comfortably fit three Infasecure child seats nicely across the second row. Two Infasecure Attain More and one Infasecure Achieve More seats fit well. 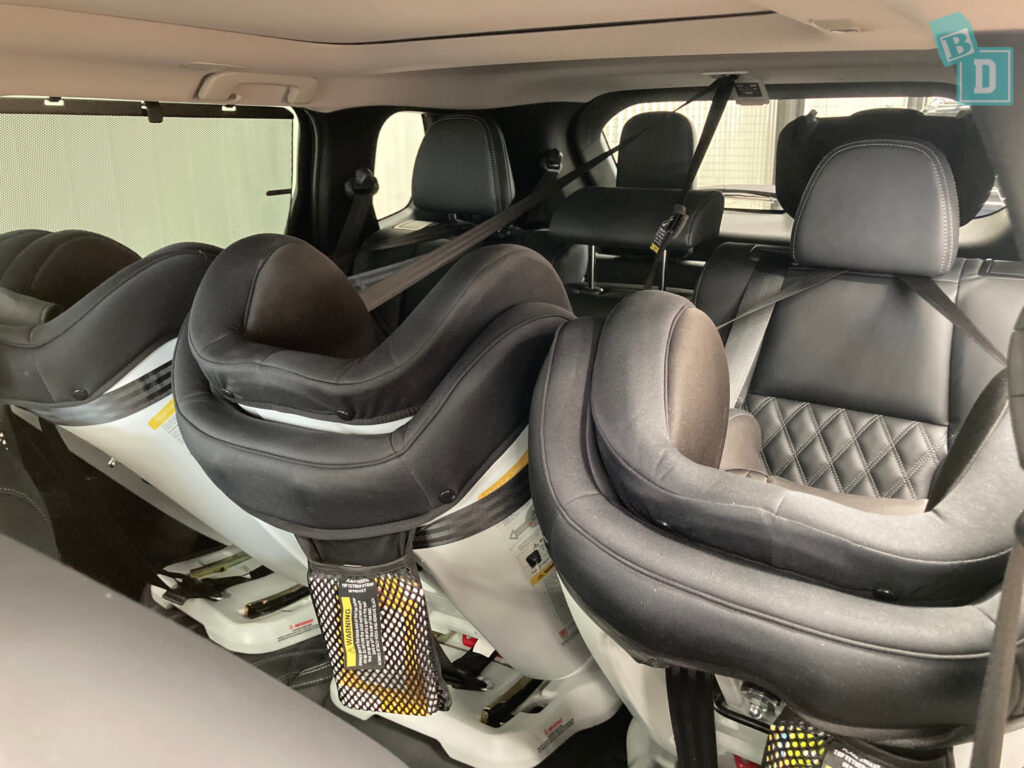 There are ISOFix points in the two outer second-row seats. 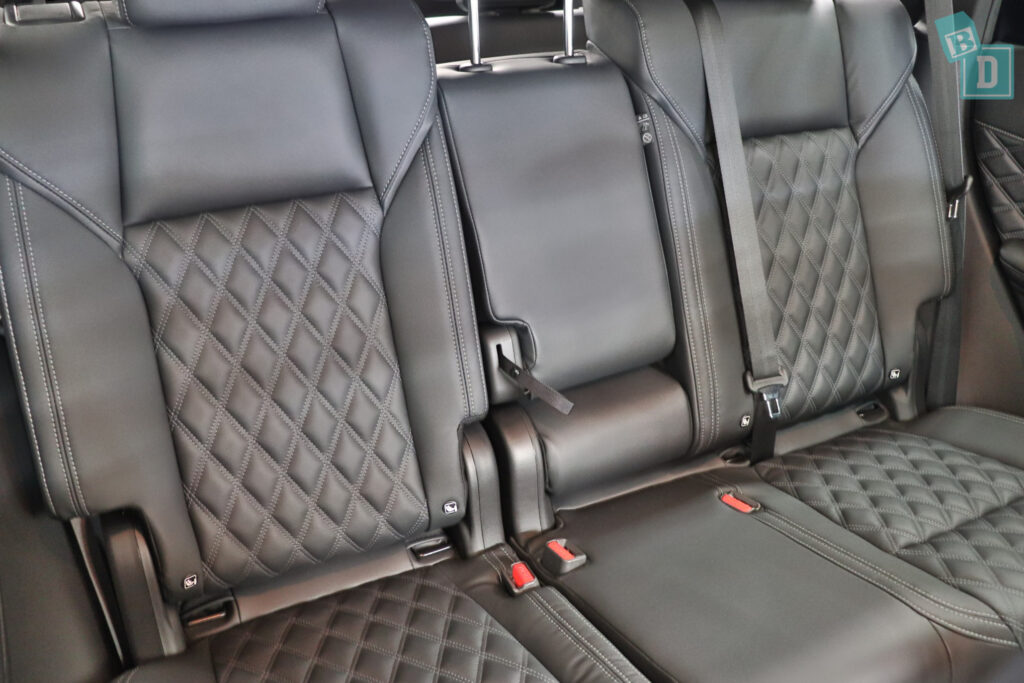 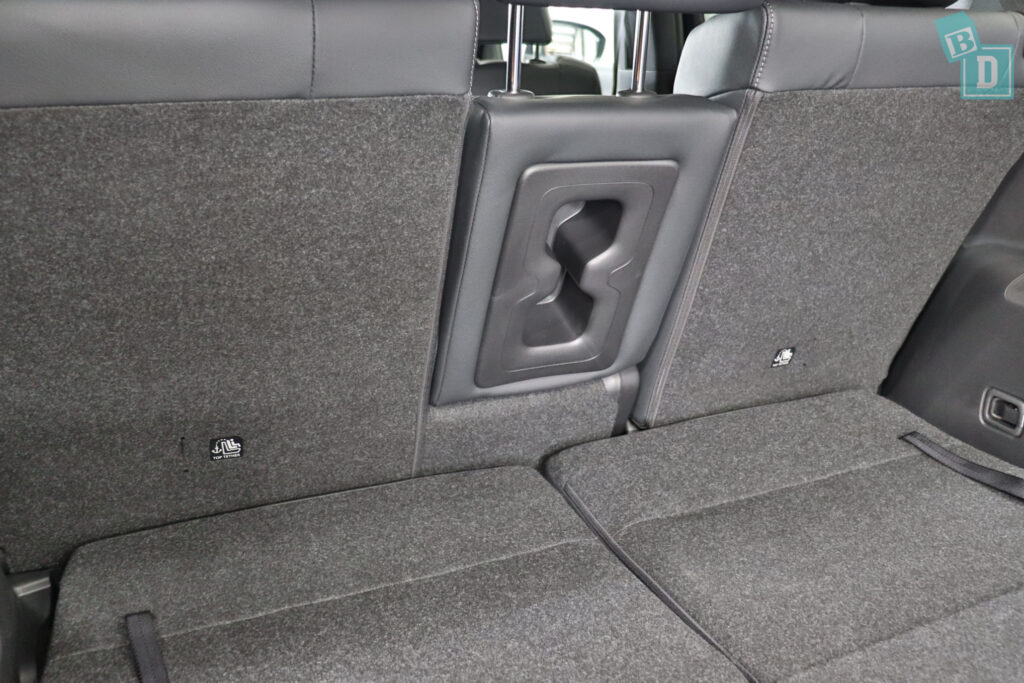 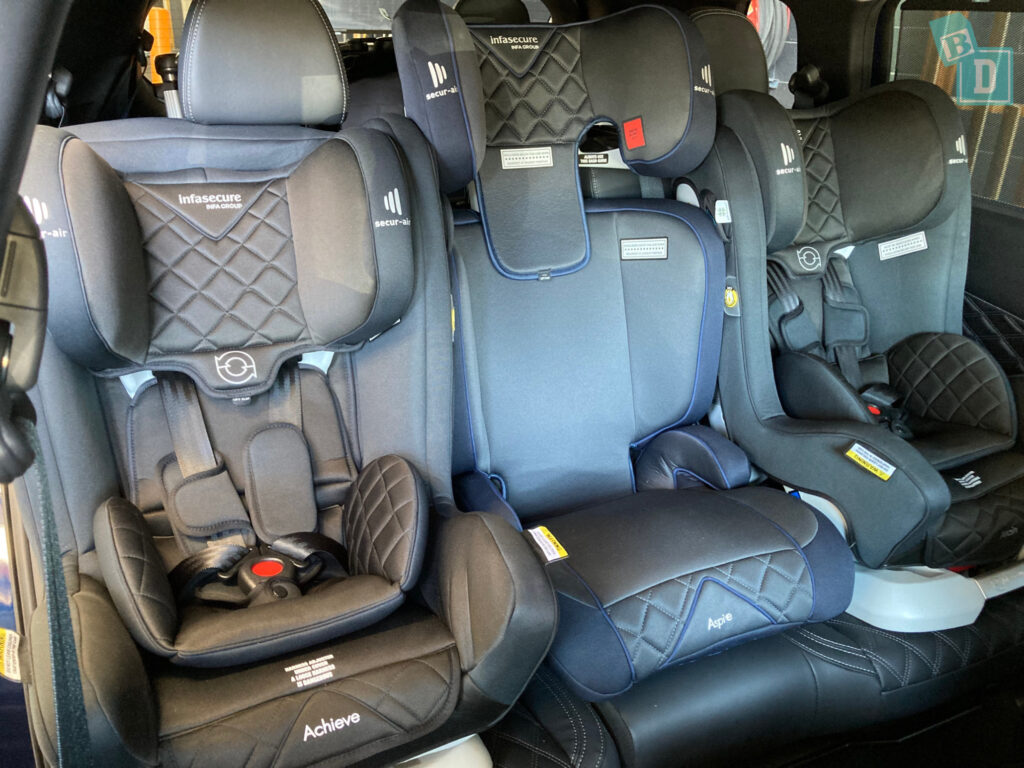 However, with rear-facing child seats, a 186cm passenger can fit in the front but on the driver's side it's actually a bit tight in the seven-seater model. 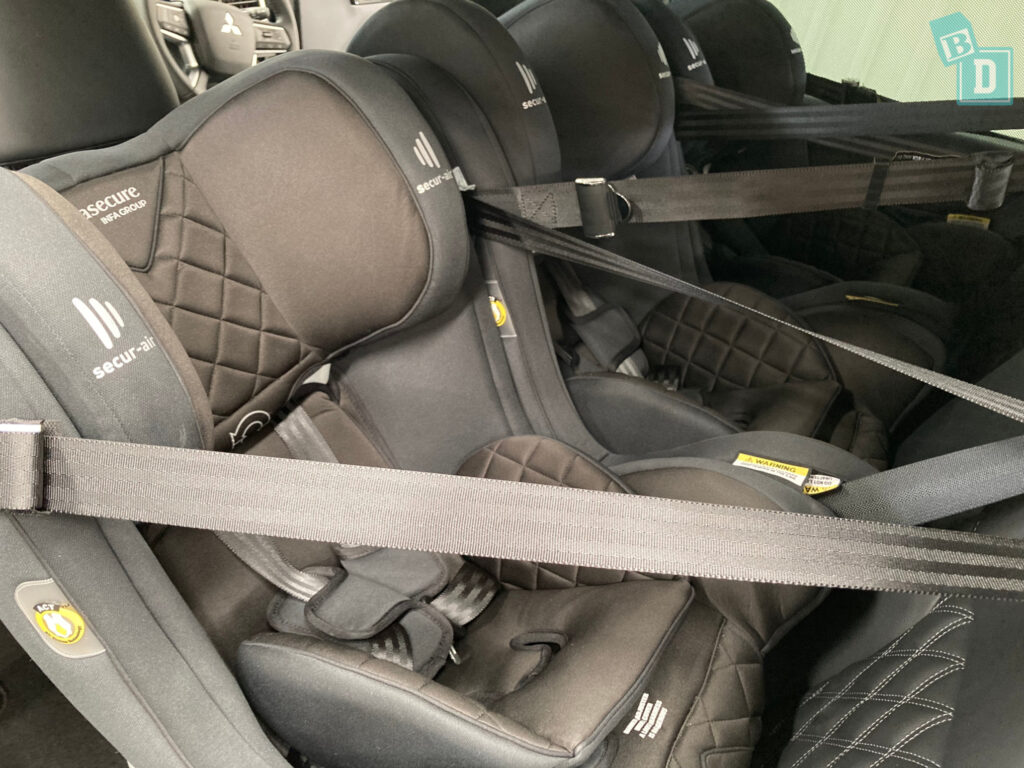 We found with the second-row seat in its furthest back position, I could just fit in the driver's seat in front of a rear-facing child seat and I'm 162cm. It's the same in the third row, there was just enough legroom for my height. 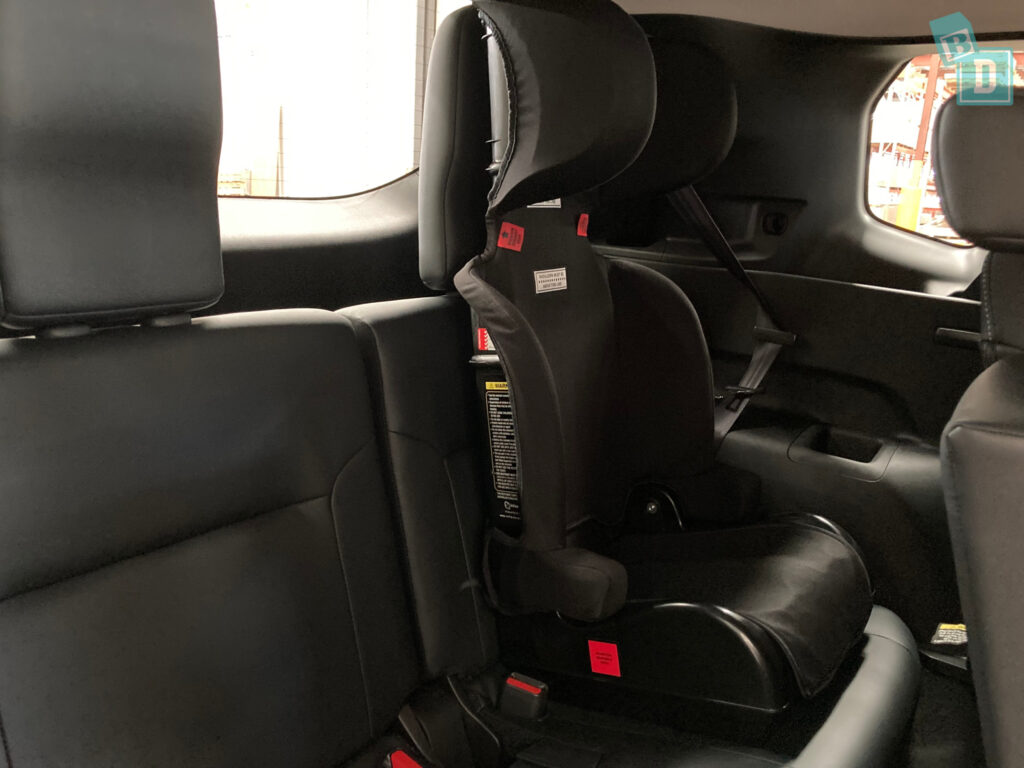 In the third row there are no top tether anchorages or ISOFix so you couldn't install a child seat back there but you could put an Infasecure Versatile Folding Booster or two for older kids, as they are light enough to not require top tether straps. 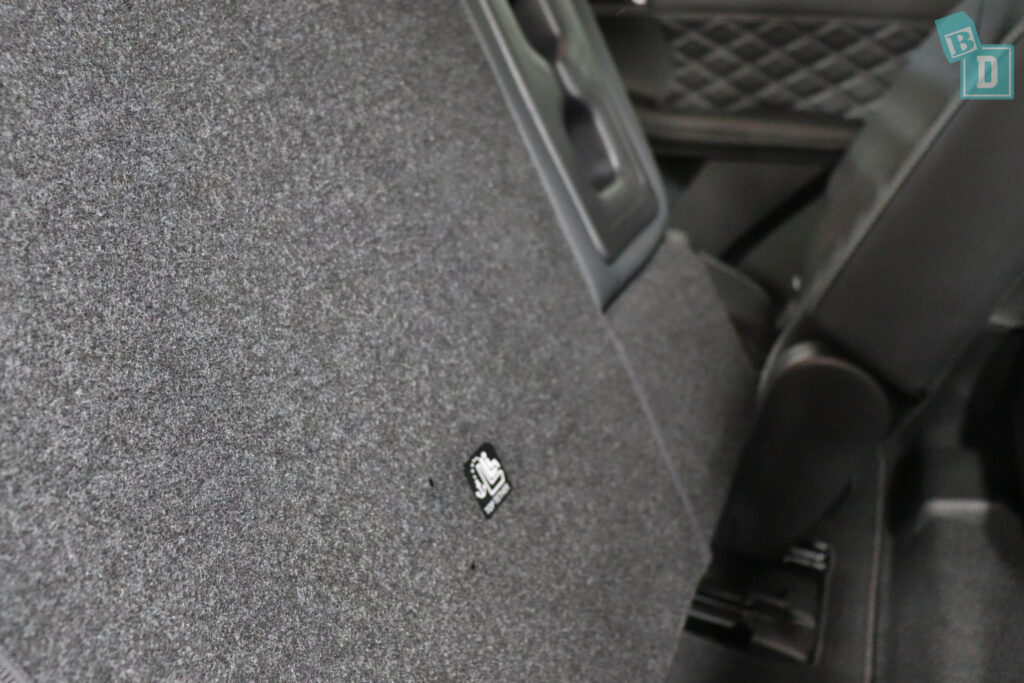 When it comes to accessing the third row, the second-row seat folds flat for you to climb through, so I found I couldn't do this with child seats installed and needed to uninstall at least one to fold the seat down flat.

If you want to learn any more about the Infasecure Child Seats used in this review, just click on the link here.

There is some great storage throughout the 2022 Mitsubishi Outlander that families will love too. On the back of the front seats are multiple storage pockets. A large one at the bottom that will hold an iPad and two smaller ones at the top, great for holding a phone or child's toy or book. This reminds me of the aftermarket seat back storages that you buy and hang from the headrest, only this is much neater. 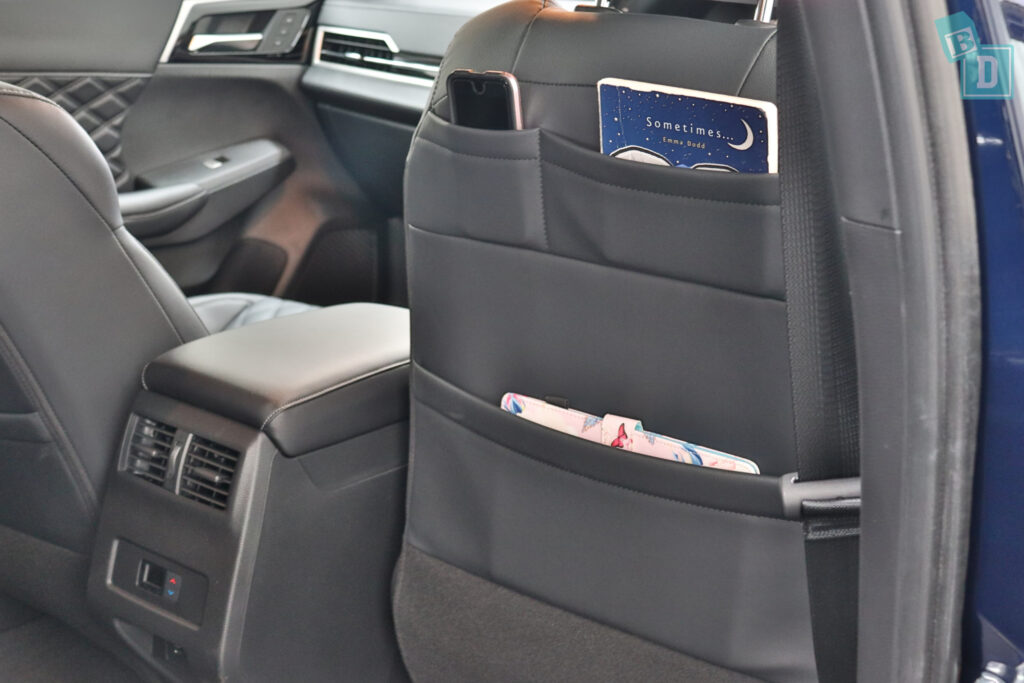 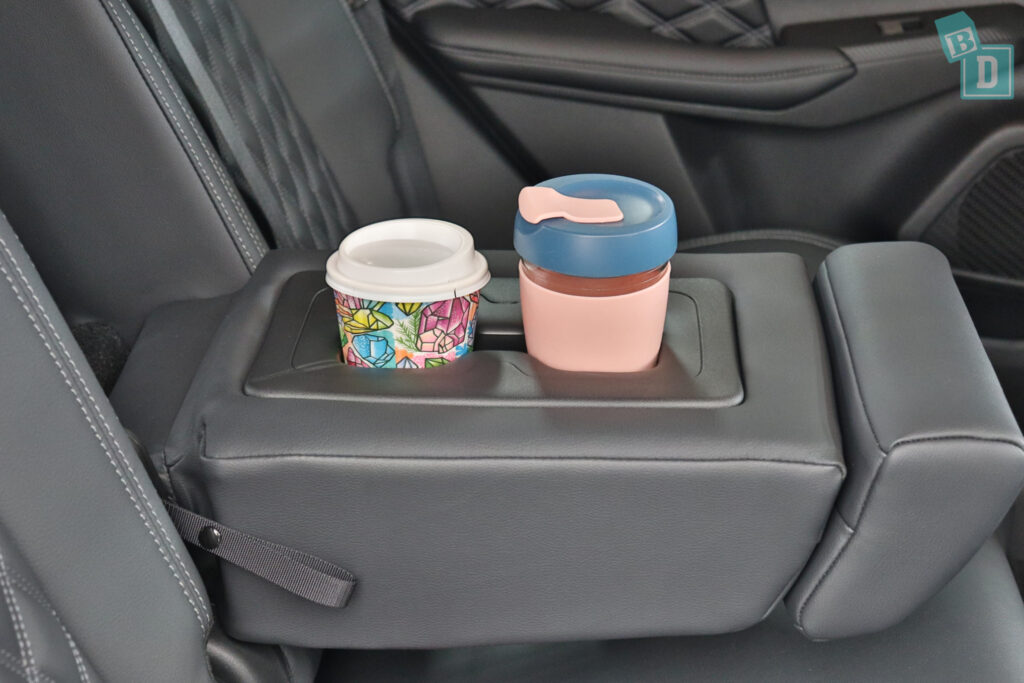 …as well as great size door bins, especially the second-row where two water bottles and an iPad will fit. 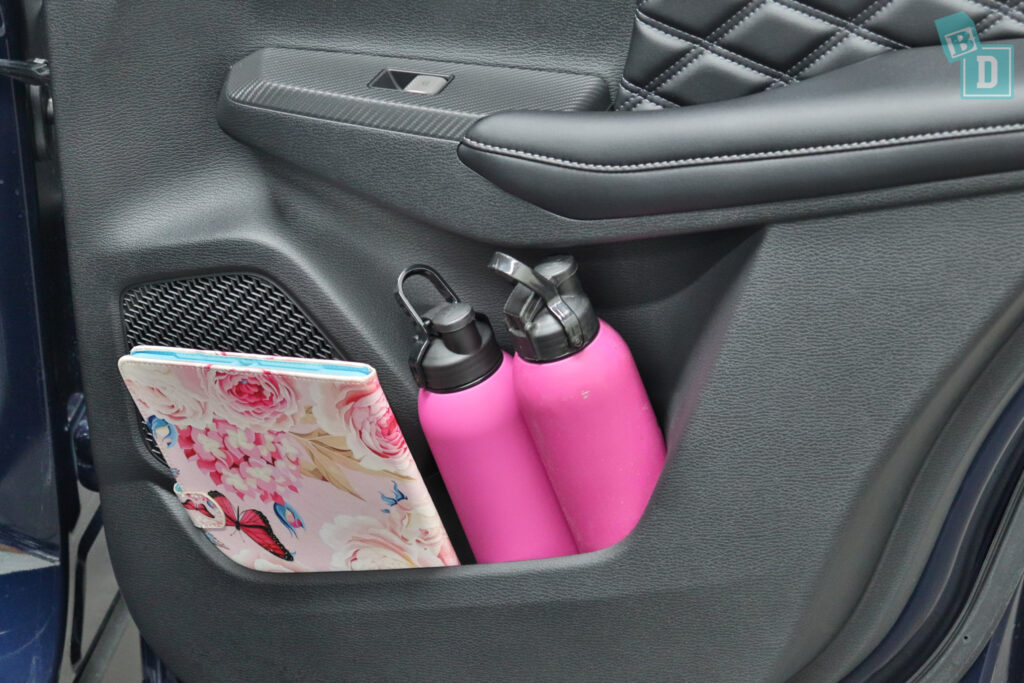 In the front, there is a wireless phone charging tray and phone storage on the side of the central console for the front passenger… 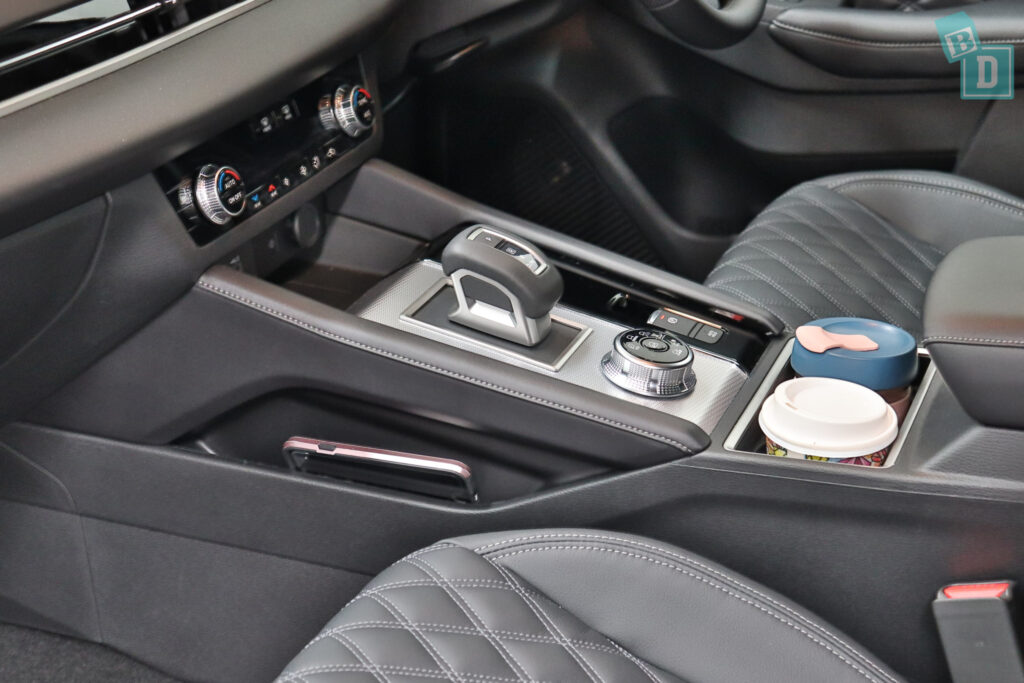 …a glasses case in the ceiling and a good size glove box for your iPad and wallet. 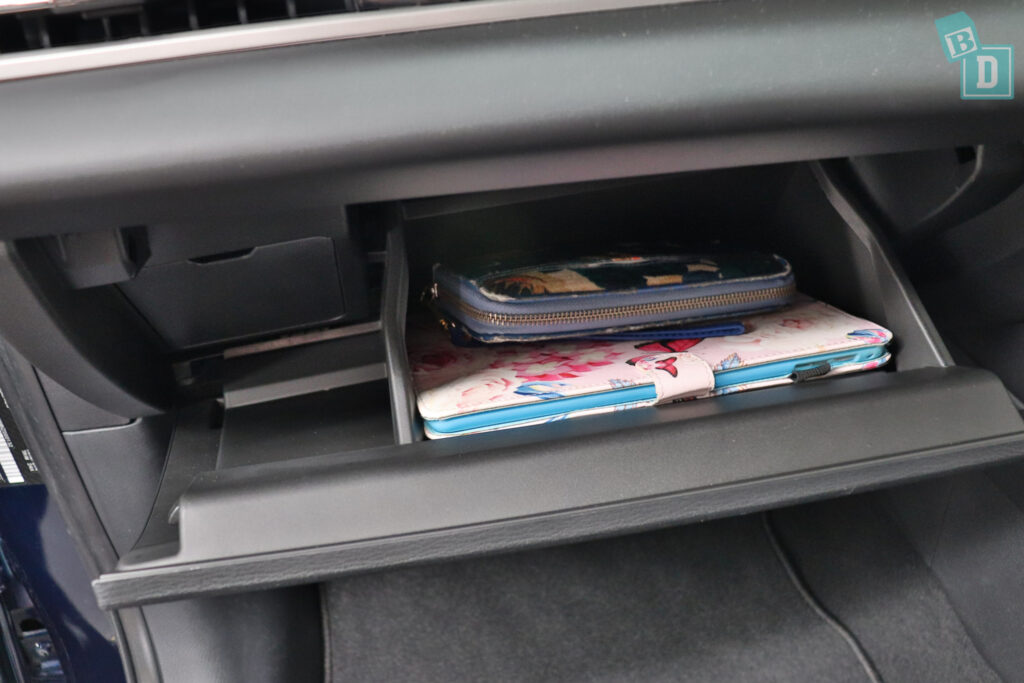 The third-row passengers get a square cup holder each which will hold a reusable coffee cup and is perfectly shaped for a flavoured milk carton!

Boot space is really good in the 2022 Mitsubishi Outlander. A twin pram will fit in the boot when using all seven seats, which is really practical for families and rare even in much larger seven-seat SUVs. 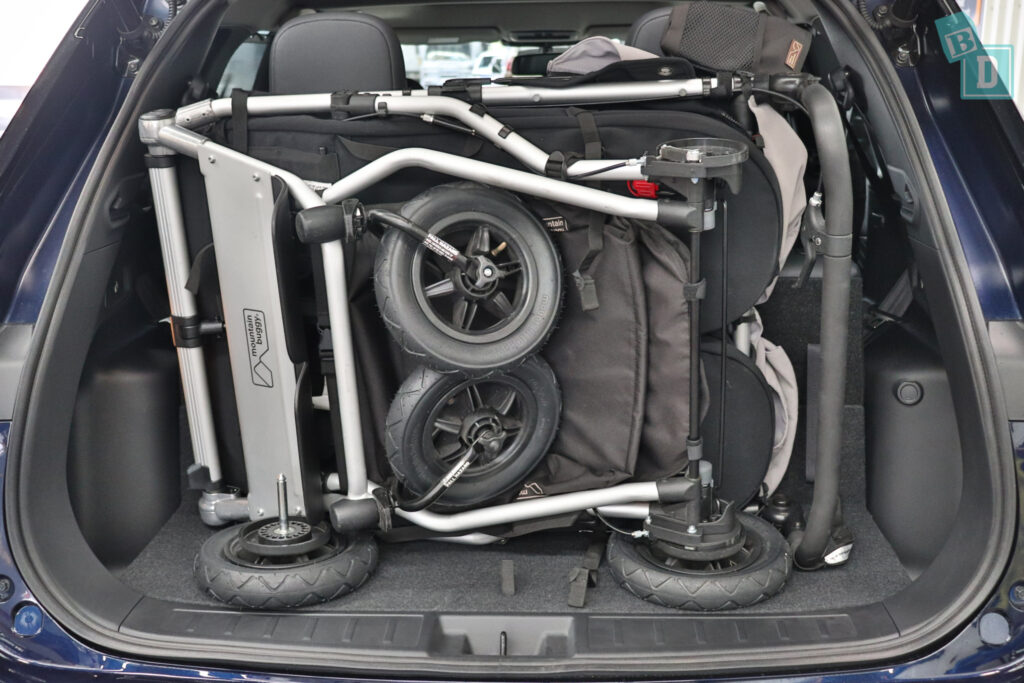 When using all seven seats, the boot will hold five shopping bags, which is one more than the previous model Outlander. It holds the same amount of bags as the Honda CR-V and Nissan X-Trail. 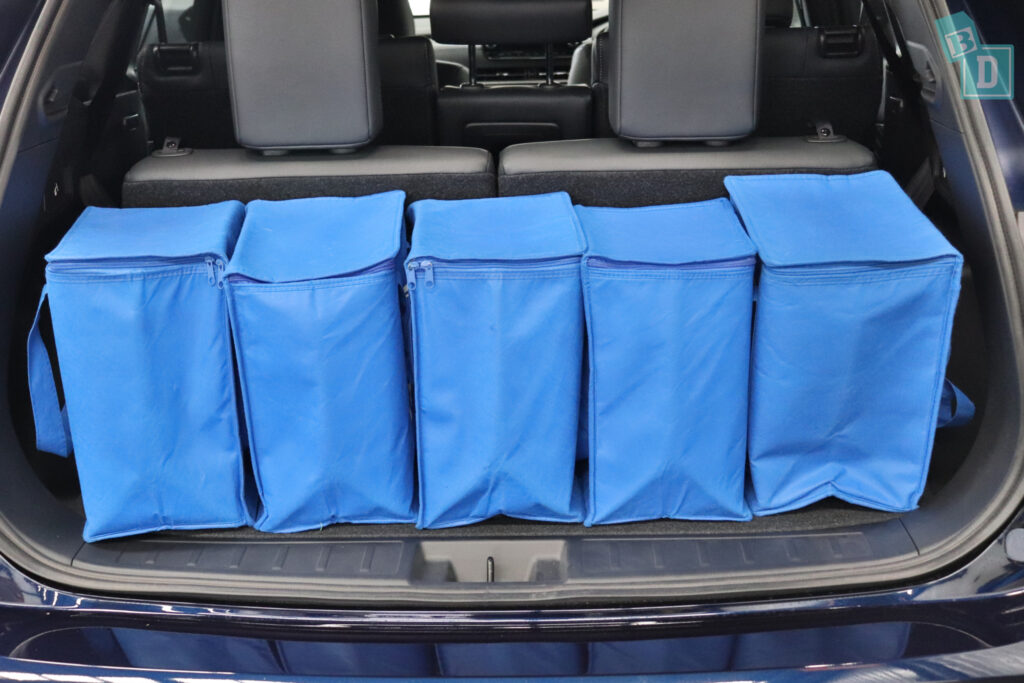 When using five seats, the boot of the 2022 Mitsubishi Outlander will hold fifteen shopping bags from empty, which is one more than the previous model Outlander. It is two more than the Nissan X-Trail and three more than the Honda CR-V. 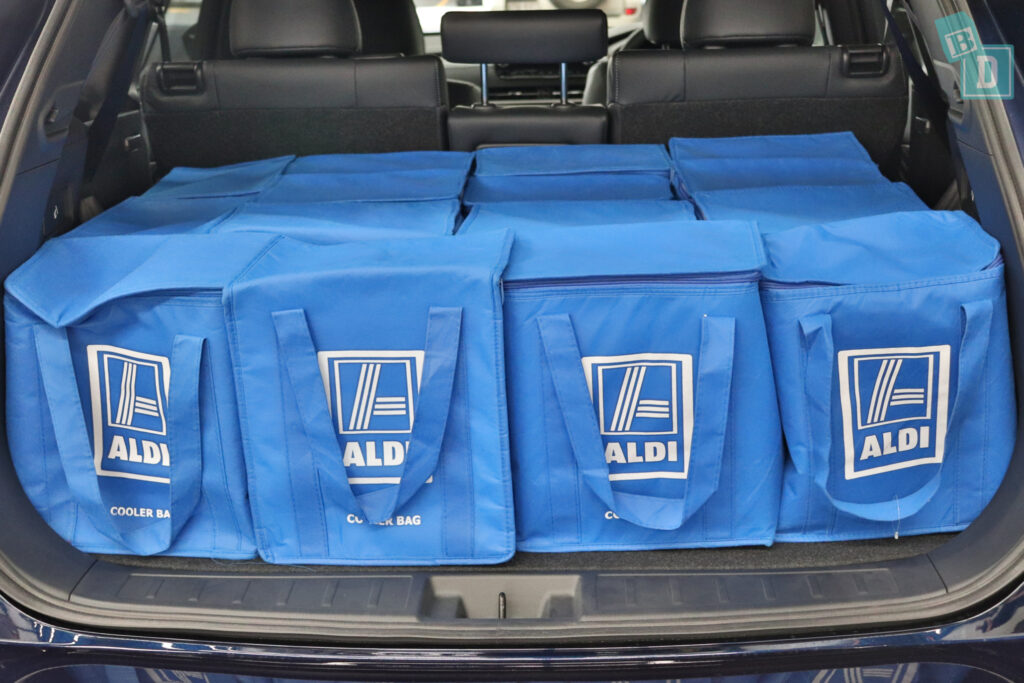 All sizes of pram and stroller fit well in the boot with a good amount of shopping or storage space. 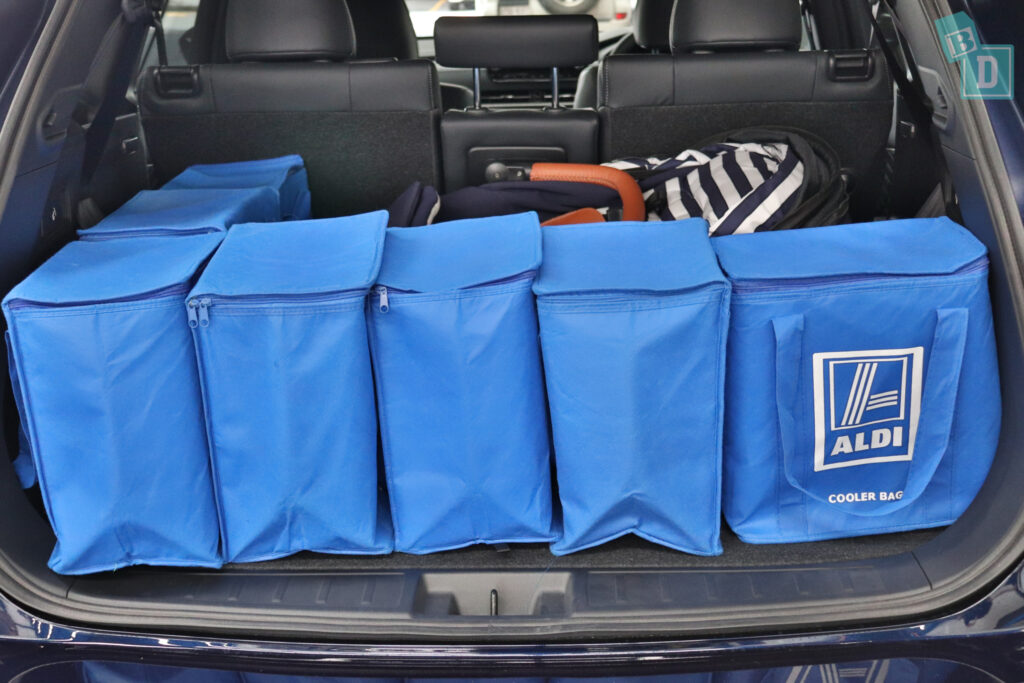 The 2022 Mitsubishi Outlander has a greatly updated safety suite – which is really important for families – including a number of safety firsts for Mitsubishi cars. These include Lane Departure Prevention, Driver Attention Alert and Traffic Sign Recognition. Other safety features new to the Outlander include Rear Autonomous Emergency Braking (AEB), Hill Descent Control, Trailer Stability Assist and Adaptive Driving Beam.

All models of the 2022 Mitsubishi Outlander have side and curtain airbags for the first and second rows only, these do not extend to the third-row seats, unfortunately. 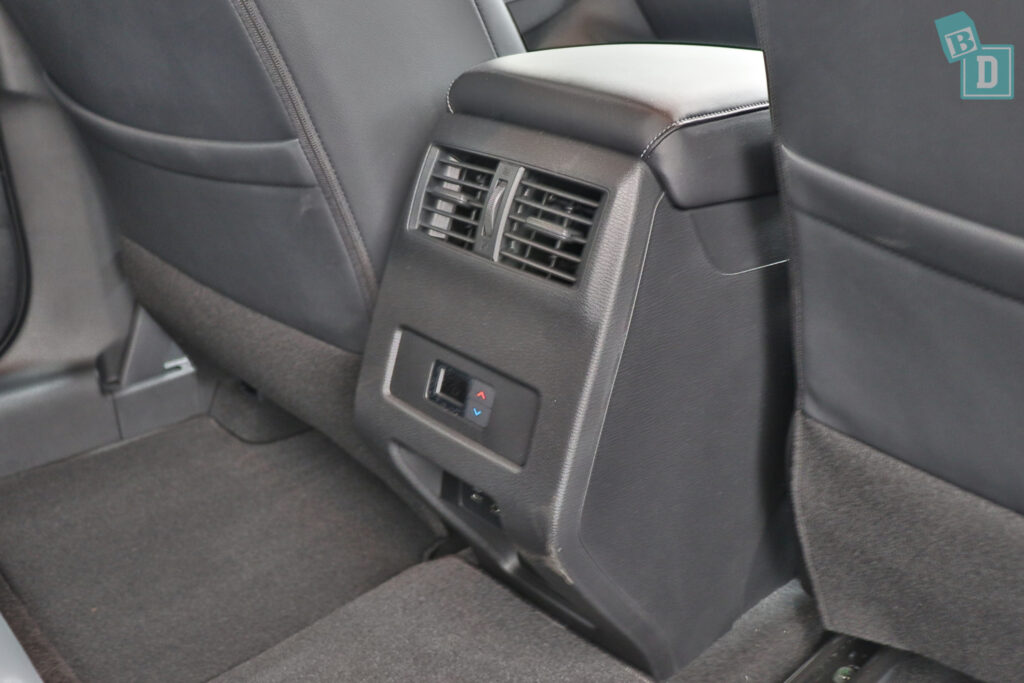 There are also air-con vents in the back of the central console box for the second-row passengers but no air vents in the third-row seats, which may mean it gets hot back there in the Australian summer. You can control the rear air-con through the front system. 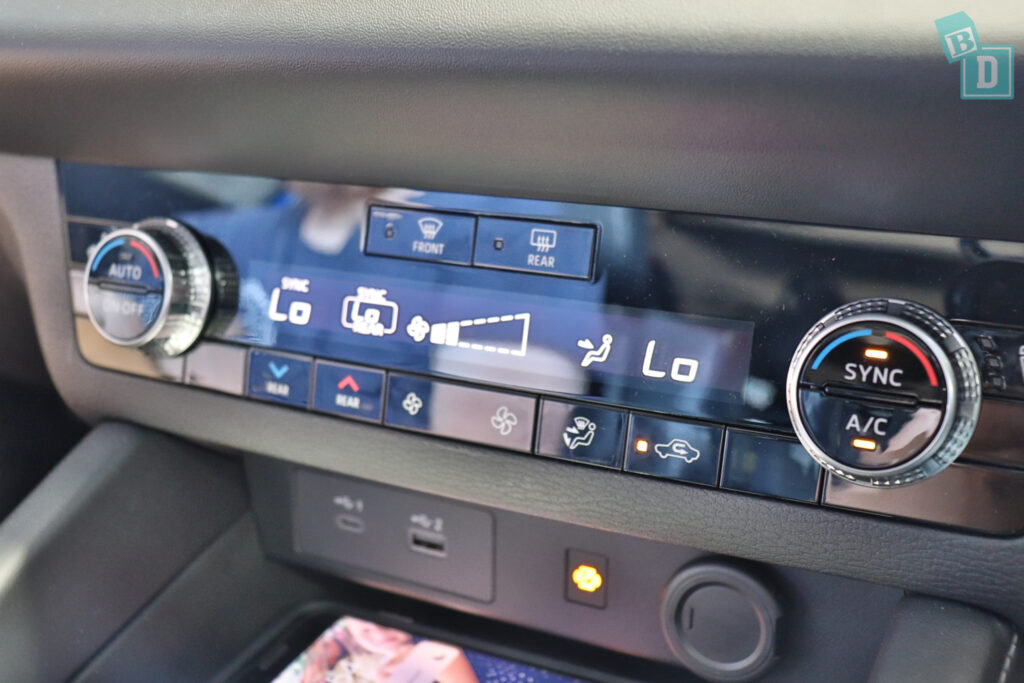 The 2022 Mitsubishi Outlander feels like a great car to drive, the turning circle seems much smaller which will make it easy to park in school, supermarket and multi-storey car parks. Visibility is difficult out of the back with three child seats installed so you definitely rely on the side mirrors. 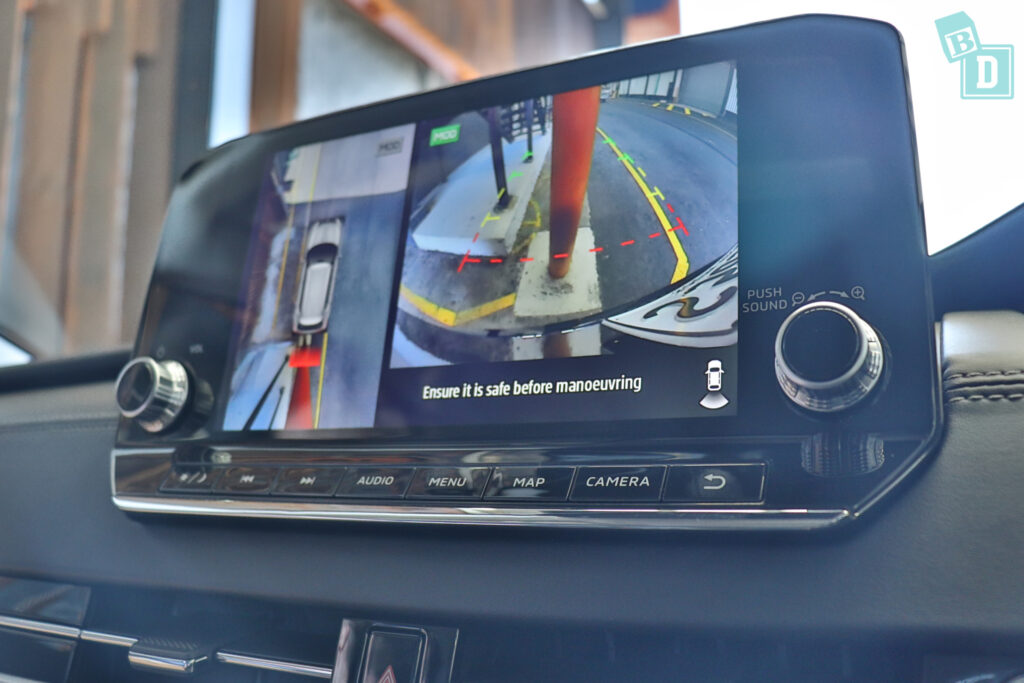 The great quality reversing camera image is also really helpful when manoeuvring or parking and you can turn the parking sensors off easily by pressing the OK button on the steering wheel. 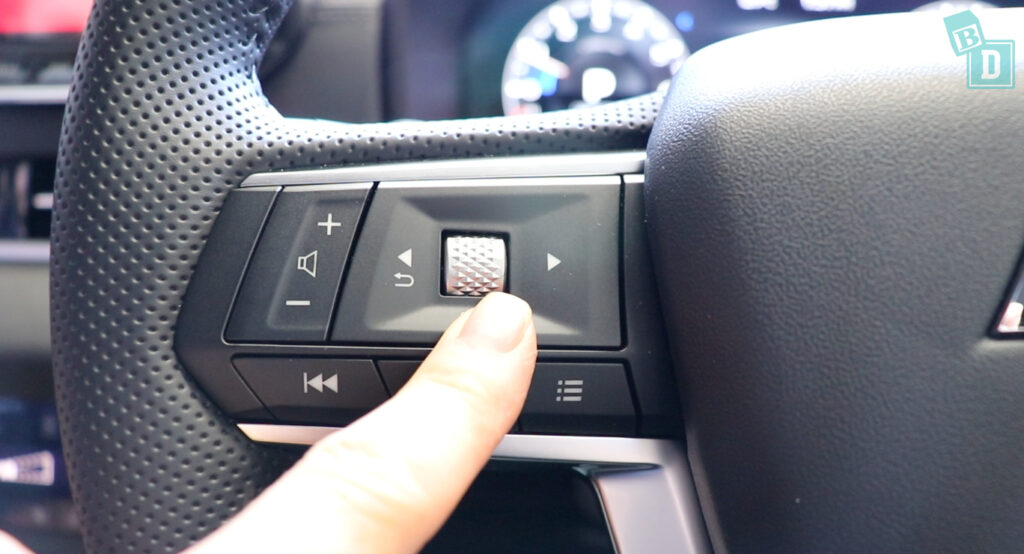 The parking sensor visual also comes up in the driver's display screen. 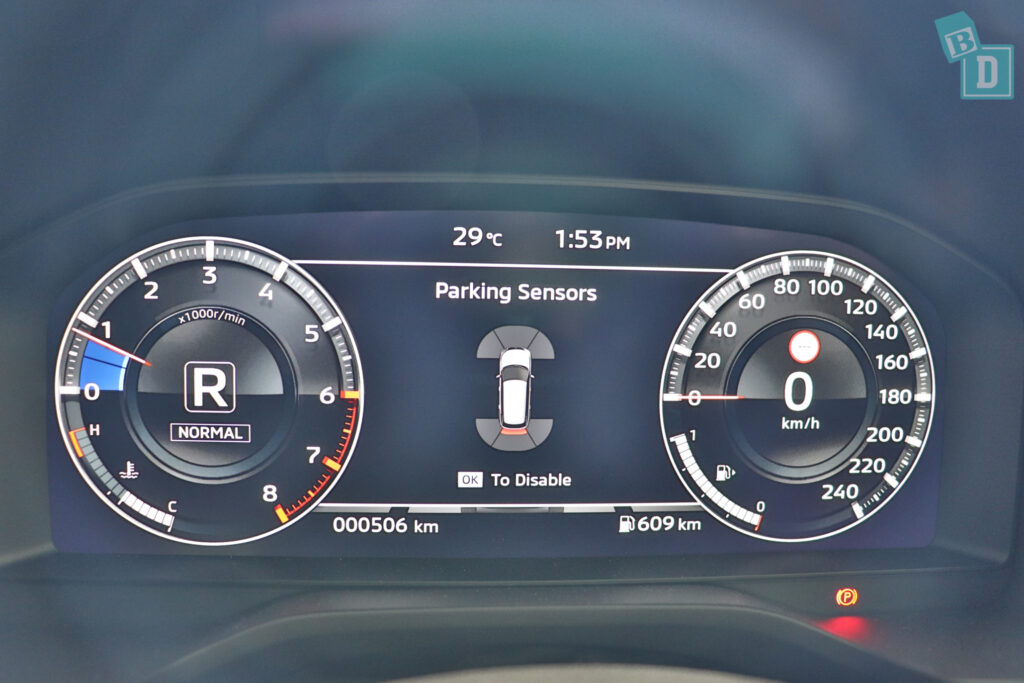 The media system in the new Outlander has been updated and it has Apple CarPlay and Android Auto. 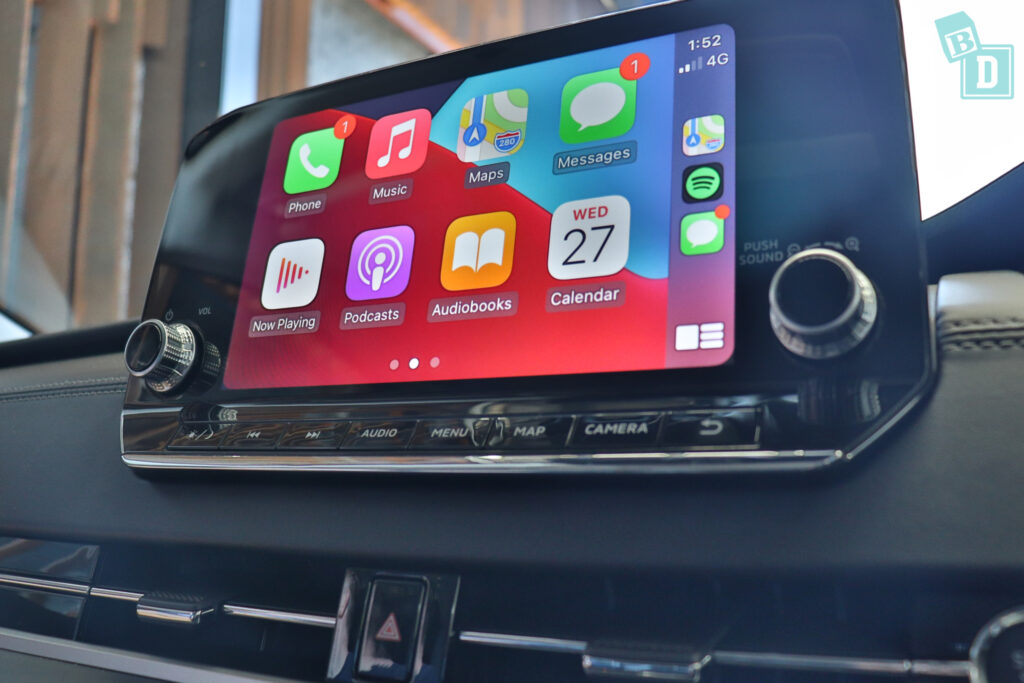 However, I think it still feels a little basic to navigate and use. 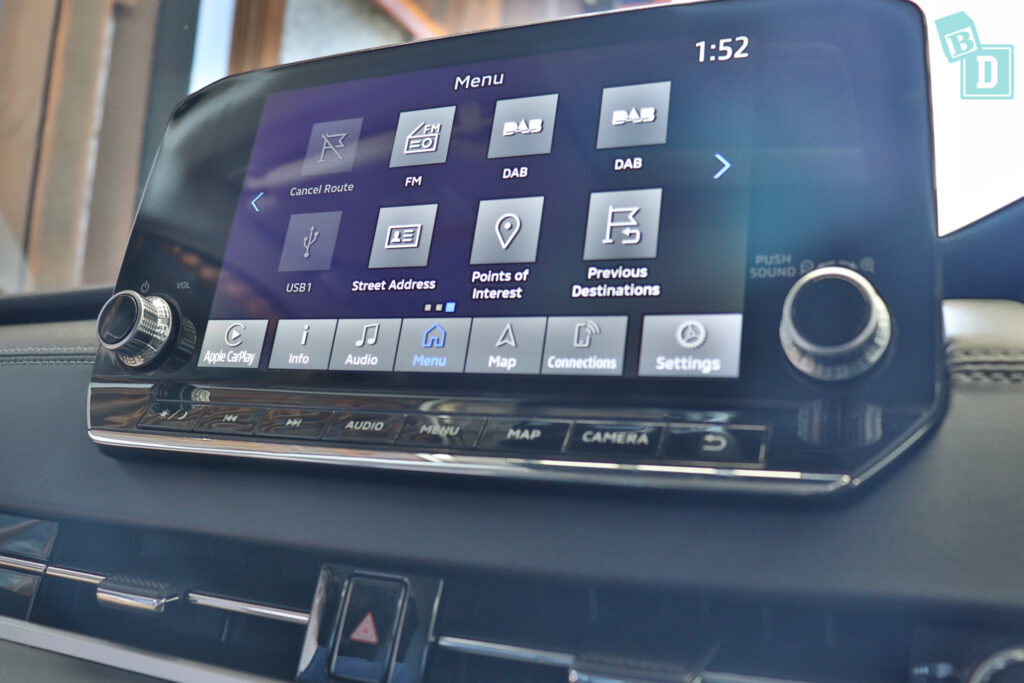 It has some good screens within it to customise a lot of the beeps and volume settings which is really great news for families. 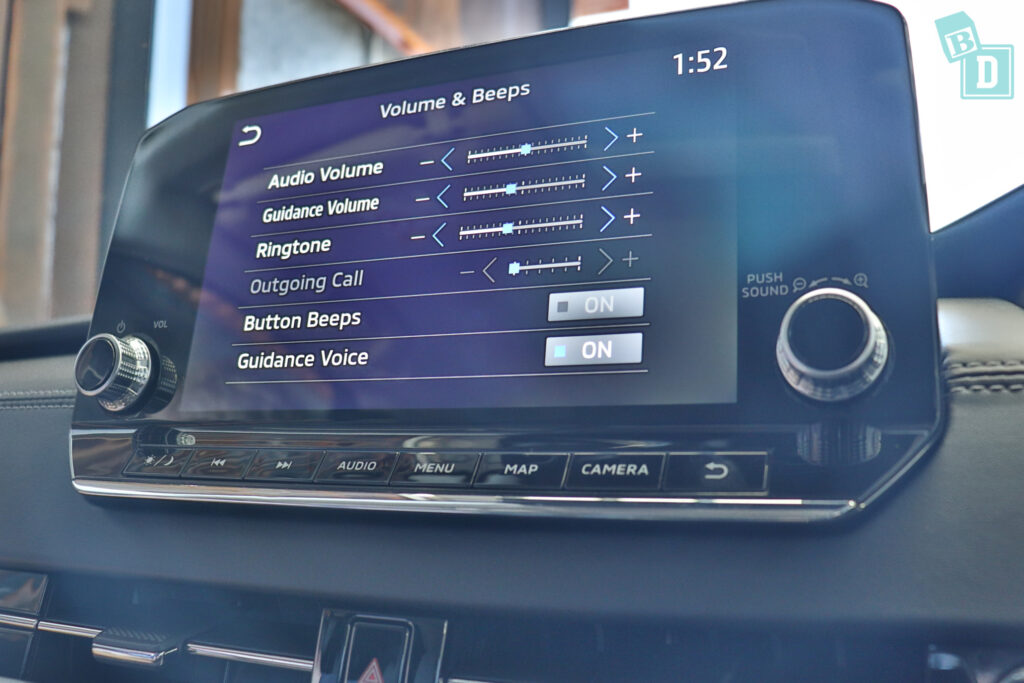 It is quite simple to find your way around the system using the touch screen. 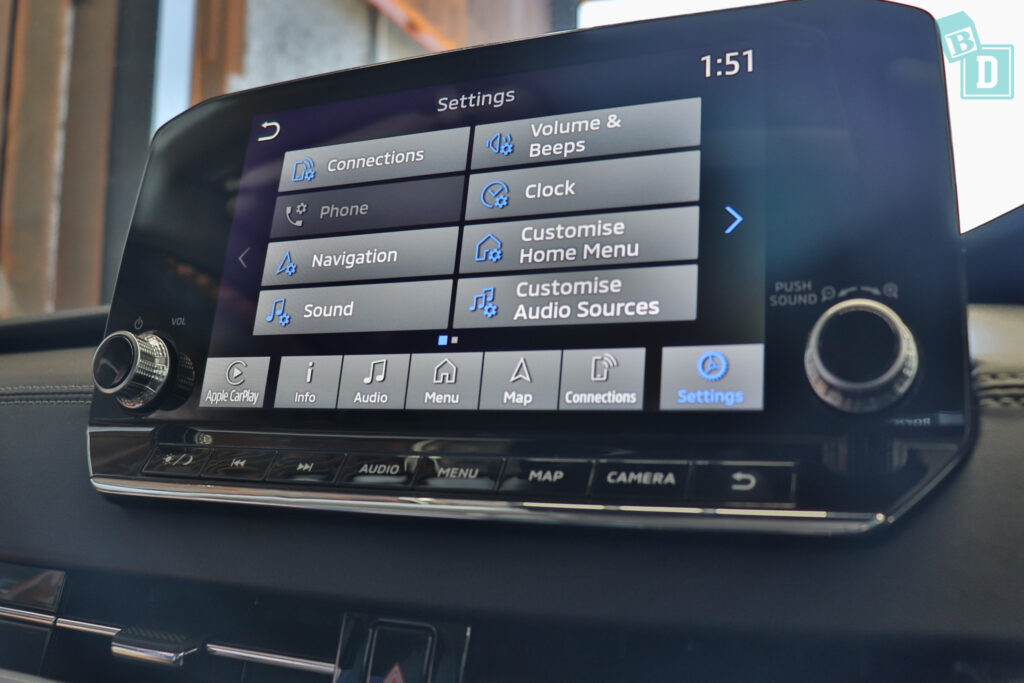 Overall the new seven-seater Mitsubishi Outlander is a competitive addition to the medium-size family SUV's available on the market and quite a practical everyday BabyDrive. Most families will want to use it as a five-seater with very occasional third-row usage for visiting grandparents and occasional playdates.

The New Mitsubishi Outlander been given a five star ANCAP safety rating. It has seven airbags as standard.

The Infiniti QX80 is the luxury version of a Nissan Patrol, meaning it’s a VERY large seven-seat SUV! I could install four large Britax child seats and with all seven seats up, I managed to fit the huge Mountain Buggy Duet twin stroller and three shopping bags in the boot as well! Read More

I’m more used to seeing lollies this colour, not cars! Can this acid yellow, funky little Hyundai Kona SUV be any good as a BabyDrive? Let’s find out… Read More